Rain didn't stop the rock on the final day of Lollapalooza '14.... 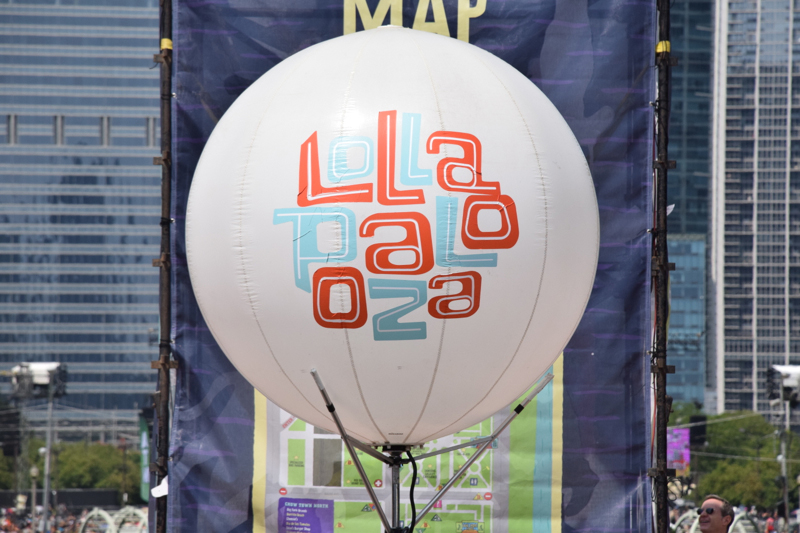 Lollapalooza. When Perry Farrell chose the nonsensical word to title what was to be Jane’s Addiction’s final tour in 1991, no one could have known how far it would go. From its early days as the premiere touring festival of the alt-nineties to today’s status as the biggest music festival in America, it’s a behemoth on the scene. That beast slouched back to Grant Park in downtown Chicago again this year, Friday-to-Sunday, August 1st to 3rd, with a huge sack of artists & much more. 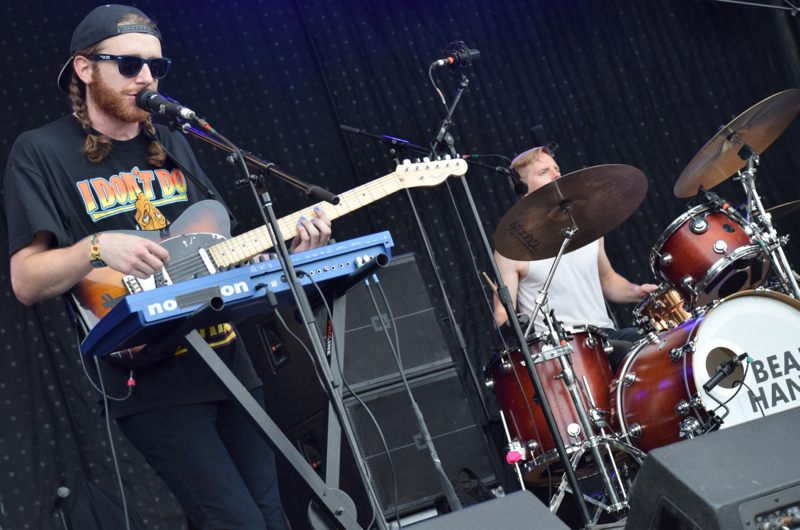 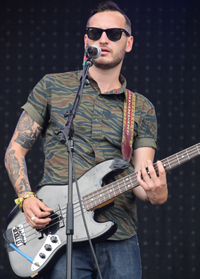 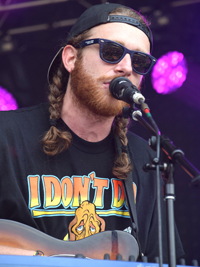 Full disclosure: QRO has loved Brooklyn’s Bear Hands for a long time, and your correspondent made sure to get to Lake Shore Stage by noon to catch not just the start, but all of their set (a luxury when one is shooting the festival, and usually only sees the first three songs of an act, i.e. the time one is allowed in the photo pit). While the set was admittedly not as electric as local NYC evening headlining shows, they still gave it. Overall, the band has gotten a little more intense, a little less party as they’ve gotten older – but singer/guitarist Dylan Rau (QRO interview) did get to roll around a bit on stage, and dedicated new single “Agora” to anyone on SSRIs or benzodiazepine. The biggest response was reserved for prior Distraction (QRO review) single “Giants” (QRO review), which ended the set – it was impressive to see the crowd (which seriously grew as the performance went on) react to just word that they were going to play it, indicating that Chicago knew & loved the song. 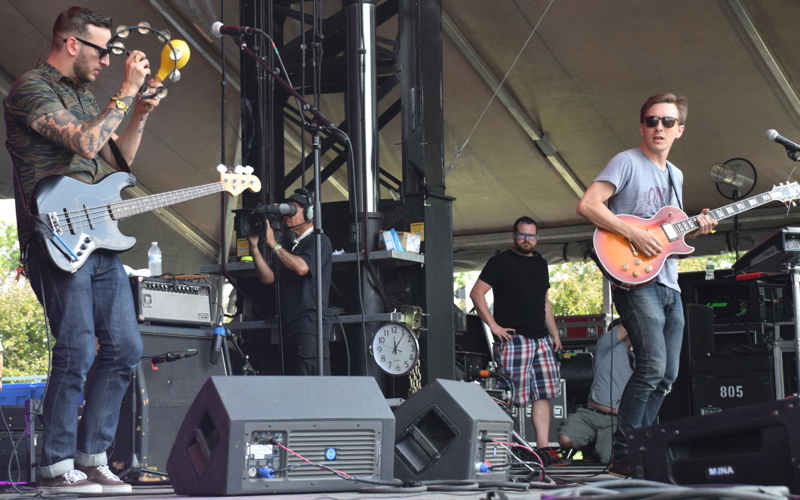 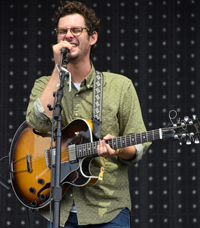 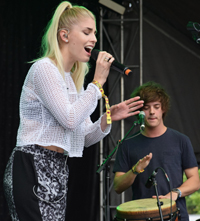 Jack Antonoff of current indie-pop hit fun. (QRO live review) has a side-project in Bleachers, who at the Lake Shore Stage somehow managed to sound like the Springsteen-esque Gaslight Anthem (QRO live review). But delivering exactly what you expected, for better or worse, was White Denim right after at the Samsung Galaxy Stage: country-twang jam like you’d find at a jam-band festival (if somewhat younger and with shorter hair), ‘sweetness’ faces to the music, etc. Following them back on the Lake Shore Stage was the highly hyped London Grammar. Actually from Nottingham, but still British, they’ve been riding a tidal wave of buzz back in ol’ Blightly and now here in America; certainly ethereal and arty, reminiscent of Day One’s Lorde, but even higher art. 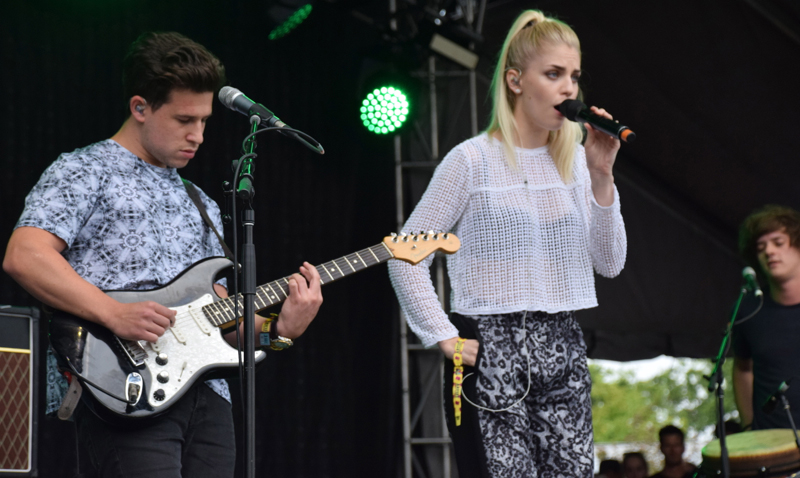 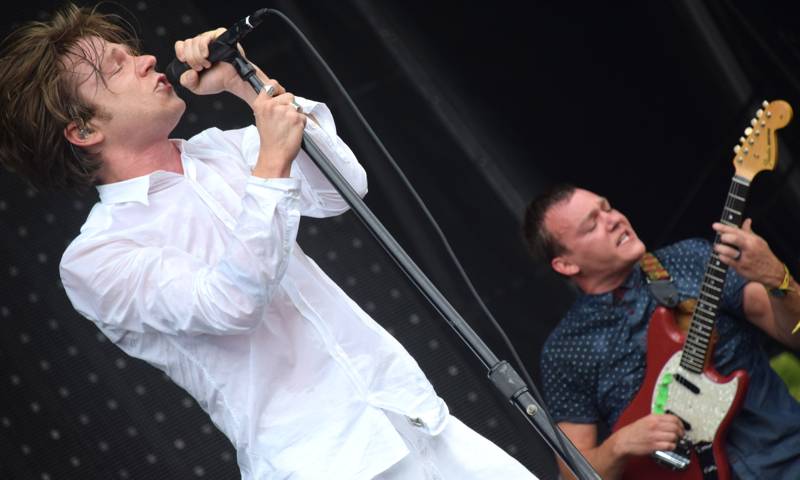 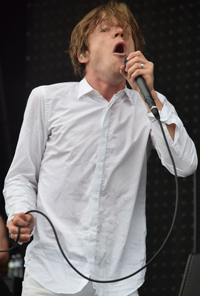 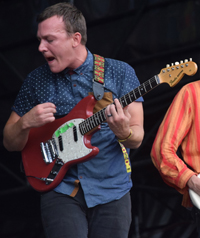 All musical acts are either better on record or live, and distinctly better live is Cage the Elephant. While their southern guitar party-rock isn’t particularly impressive on one’s stereo, live at the Samsung Galaxy Stage they took it to a whole other level and beyond. Remarking that the last time they played Lollapalooza it was in the rain, so it was only fitting that it rain again for them, that completely did not stop them, with singer Matt Shultz and brother/guitarist Brad diving into the super excited crowd early and often. 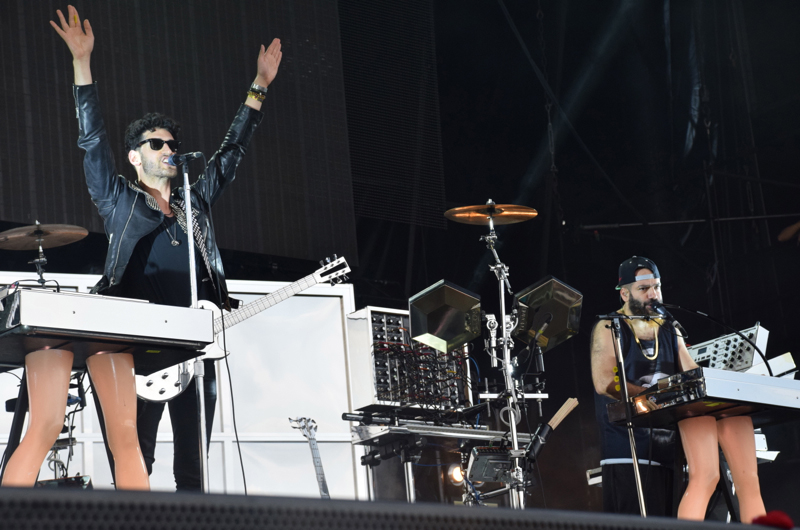 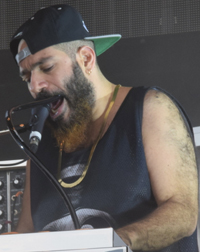 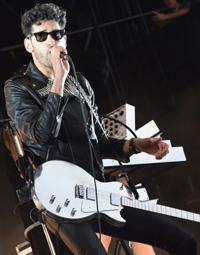 Another act super happy to be there, with a crowd that felt the same way, was the musically very different Chromeo all the way on the other side of Grant Park at the Bud Light Stage. Unabashedly disco on this year’s White Women (QRO review), men & women of all colors were screaming for the duo (okay, majority women), who were able to put out an incredibly big and diverse sound despite being ‘only’ P-Thugg and Dave 1 (later saw the pair in the press tent, Dave 1 joking around with the Getty Photography people – because this is a band who knows how to look good…). 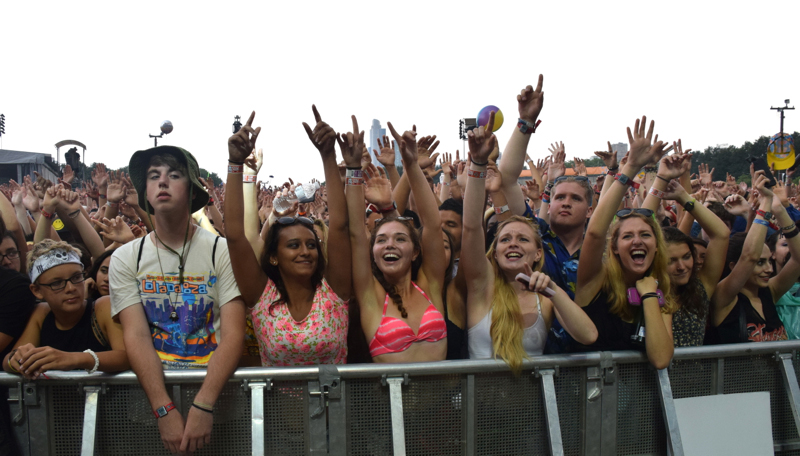 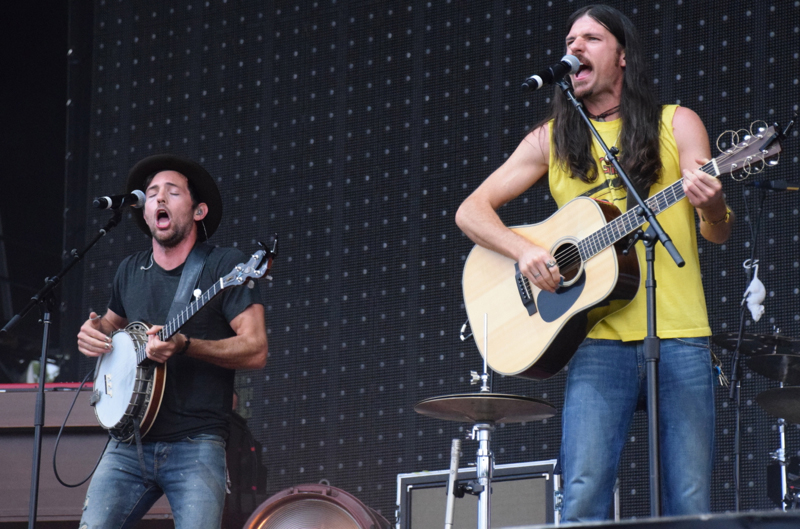 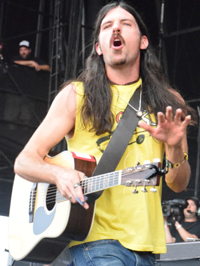 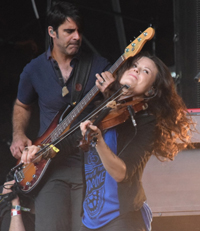 But if you wanted to be just up with life, The Avett Brothers on the Samsung Galaxy Stage had your fix. It was interesting to watch the dynamics among the high-profile alt-country act up there; while singer Scott Avett seemed a little reticent, especially when on the piano farther back on the stage, it was guitarist Seth Avett who played the rabble-rouser, including leading the crowd to sing along to his brother. But there was a lot of rabble-rousing on stage, including violinist Tania Elizabeth bounding around and Joe Kwon lifting his cello in the air (Bob Crawford was ‘tied down’ to an upright bass for much of the time). 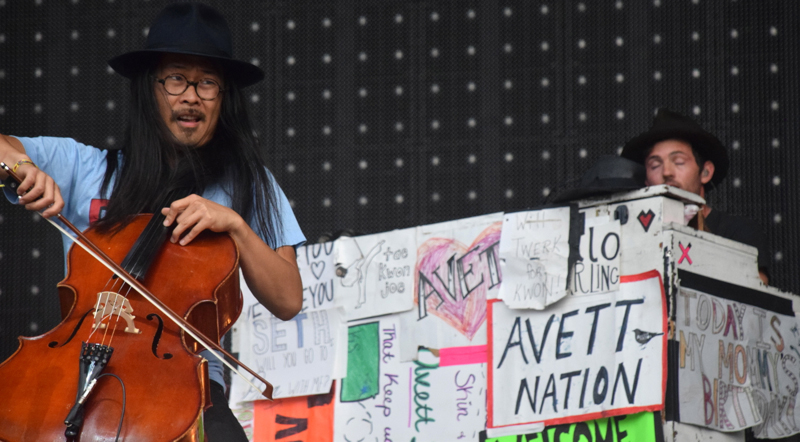 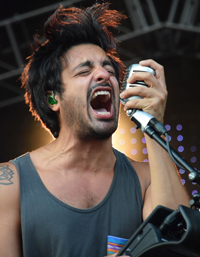 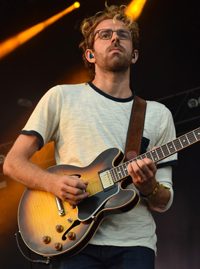 The knock on Young the Giant has long been that they play nice-but-not-gripping indie-rock – however, they were quite gripping on the Lake Shore Stage, very active, very alive. Perhaps that was due to that weekend’s return of guitarist Jacob Tilley, as mentioned by singer Sameer Gadhia, in between his many faces. 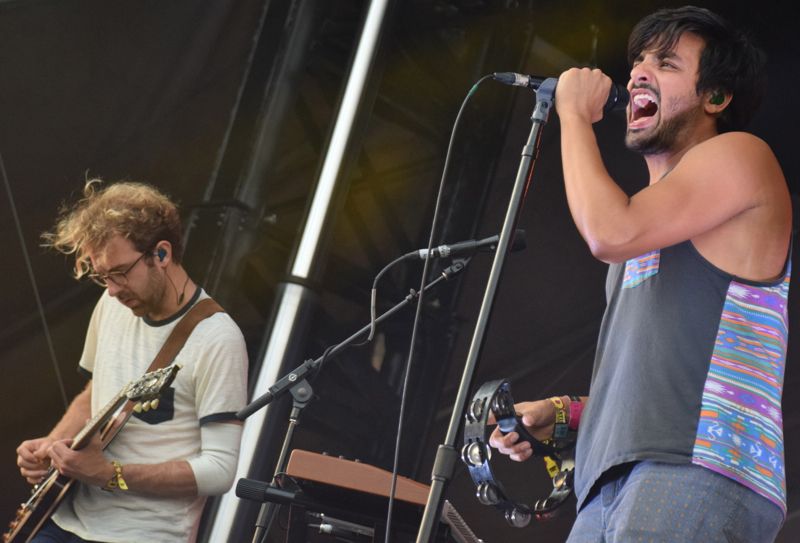 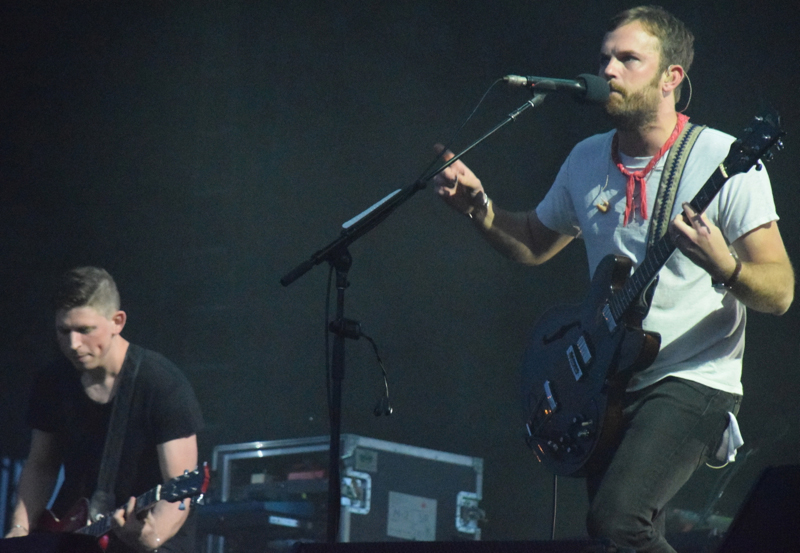 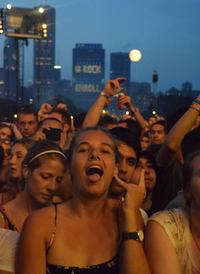 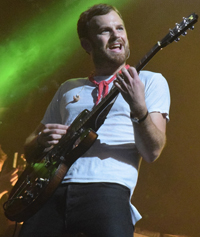 On Sunday the Samsung Galaxy Stage played host to a lot of country-rock, from White Denim to Cage the Elephant to The Avett Brothers to the evening/festival closers, Kings of Leon (not to mention lots of brotherly music, from Shultz’s of Cage, Brothers Avett, and Family Followill of Leon). Their giant and effective rock has been known for a while, but they upped it at Lollapalooza by bringing on a string section mid-way through.