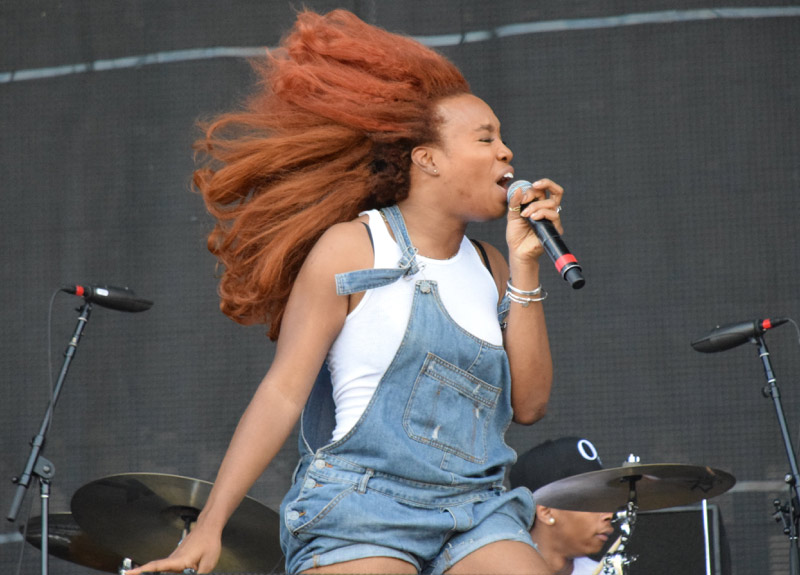 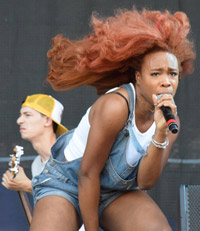 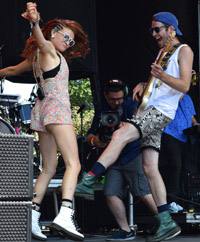 The sun was beating down as Lollapalooza began on Day One, but there was also some serious wind going on. That more-than-a-breeze played havoc with SZA’s mighty locks as she opened up the massive Samsung Galaxy Stage, but she was still all smiles with a sweet and soulful sound. Following on the Sprint Stage was the first of many female-led electro-pop acts there, MisterWives, who were very upbeat, but why not? They got the most hand waves & snaps that they’d ever had. 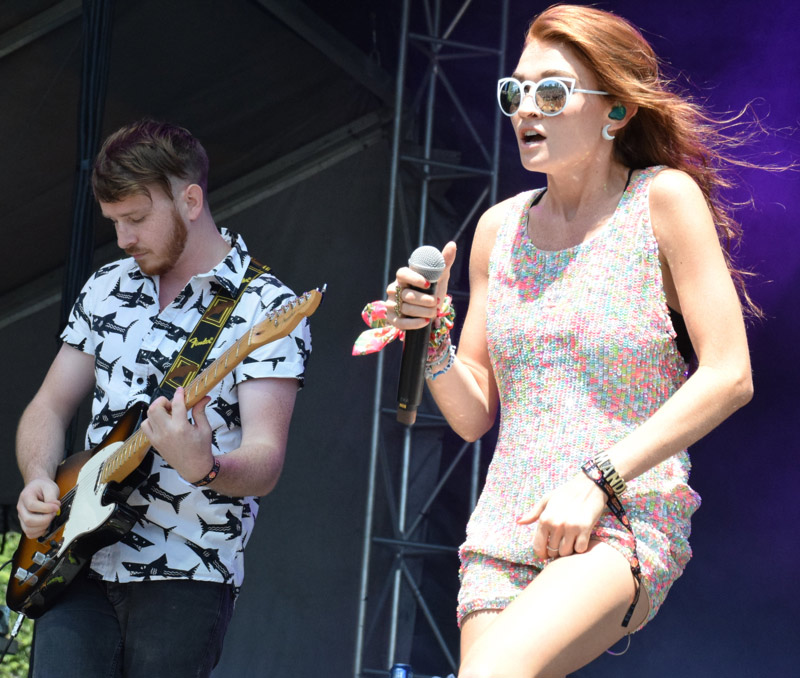 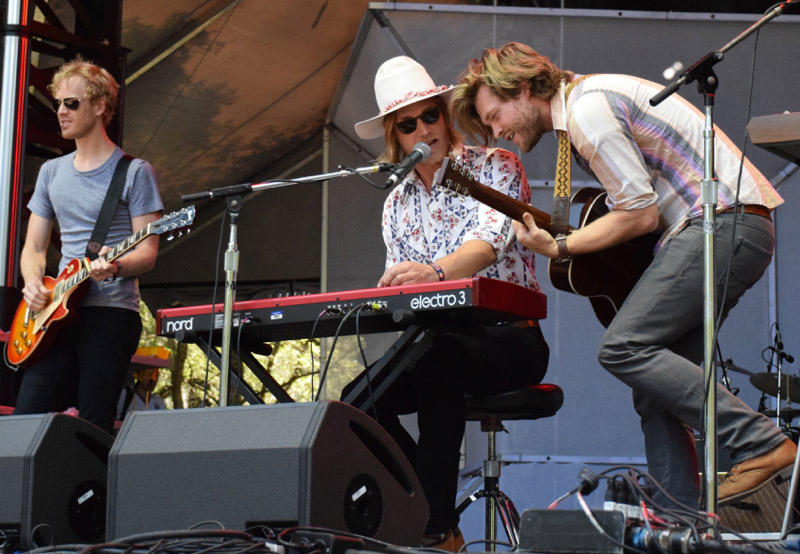 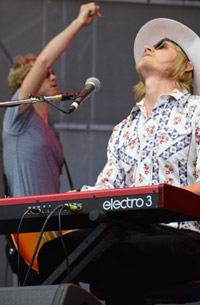 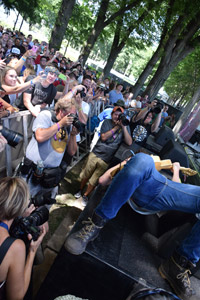 On the more intimate (relatively speaking) Pepsi Stage, Jamestown Revival brought a country-backwoods revival under the trees. Any festival’s gonna have sound problems, and Jamestown Revival’s set began with a too loud bass drum, which they proceeded to joke about. At the even smaller (but shady) BMI Stage was Black Pistol Fire, a gritty party-garage guitar-and-drums duo that are, of course, from Austin. Singer/guitarist Kevin McKeown played on top of the speakers in the pit early (and it was not a large pit), nicely fitting the relaxed, young party atmosphere of the BMI Stage (including BMI Backstage VIPs). 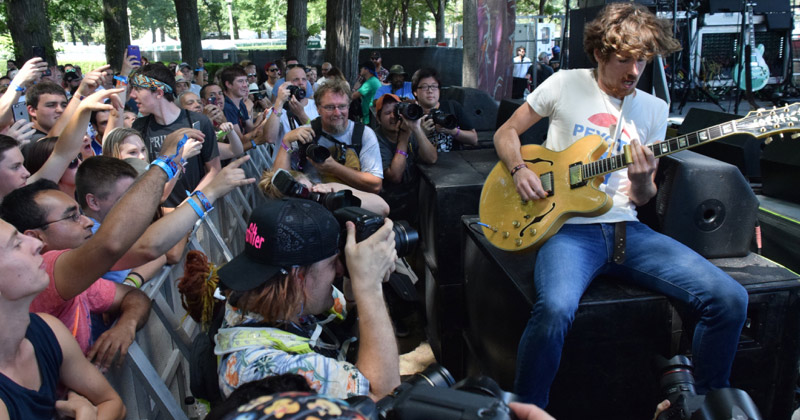 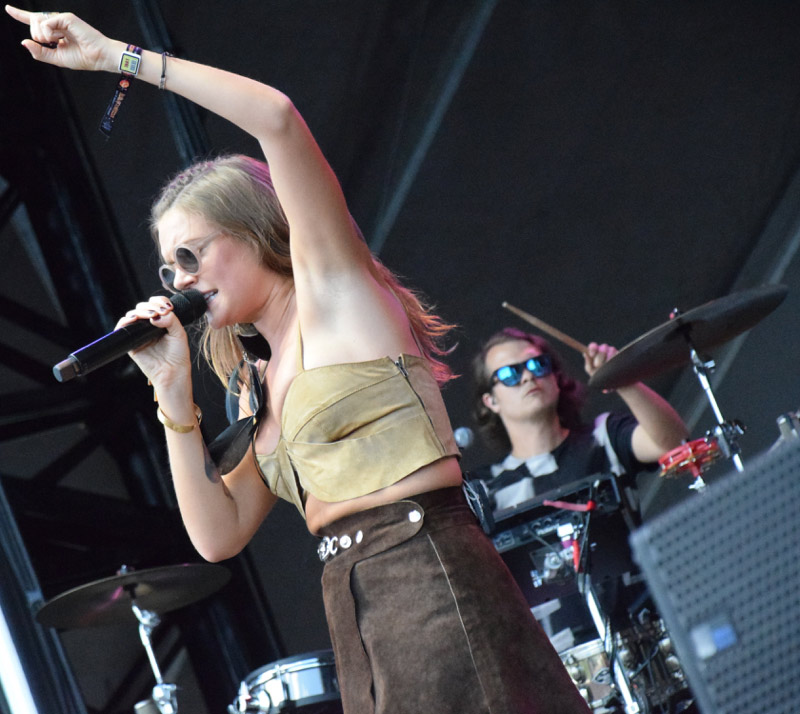 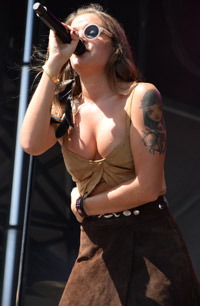 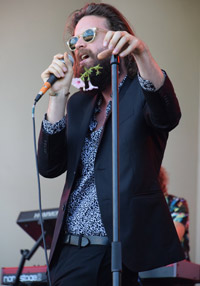 There was soul in the air when Glass Animals brought their modern take on it to the Samsung Galaxy Stage, while St. Paul & The Broken Bones had more of a James Brown thing going on at Bud Light Stage on the other end of Grant Park. It was a hot show when Tove Lo played Sprint Stage, with an excited crowd and the singer burning her bare feet on the black stage, having to go to sandals after her first song (she also mentioned that her breasts looked larger – right before performing “Bodies”). Father John Misty was much more relaxed on the Palladia Stage, even picking a flower from the large pot/trench at the front of the stage, not to mention playing with his mike stand. He had a whole lounge persona going on, though longer fans thought it was an off set from him. 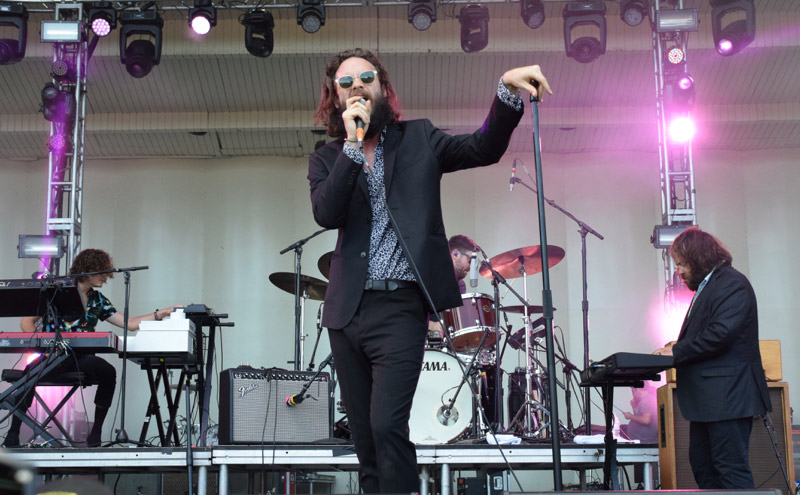 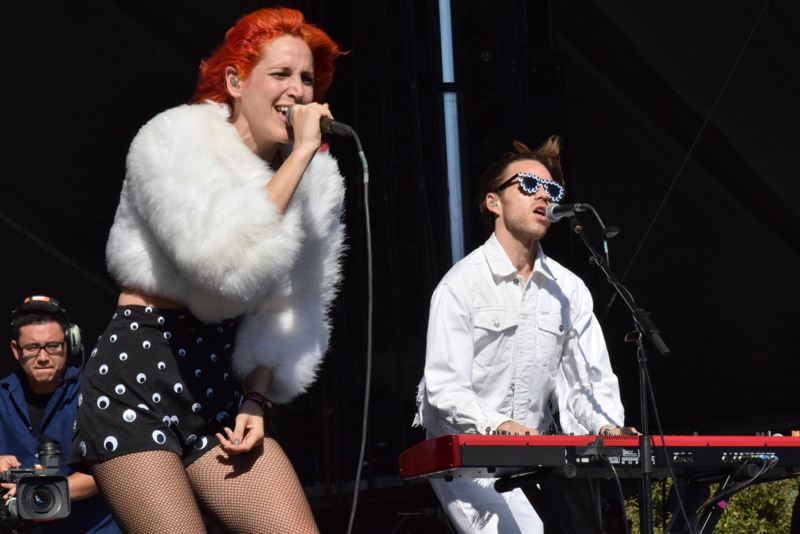 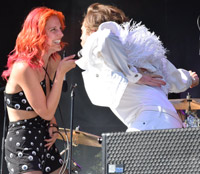 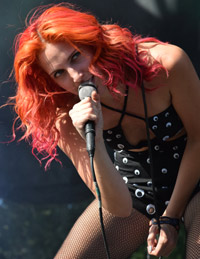 Not off was Hot Chip, touring behind their new Why Make Sense?, who sounded great on the Bud Light Stage. Many people at the festival remarked that they’d already seen Cold War Kids more than once before, but that was no reason to miss them at the Samsung Stage, as there’s a reason they’re still alive & active (even if their old songs like “Hang Me Out To Dry” are still their best). MS MR brought another female-fronted electro-pop act to the Sprint Stage, with a smiling & seductive Lizzy Plapinger and a dancing Max Hershenow shaking the fringes on his jacket. They were just out of the studio and playing new songs, along with old ones (i.e., from How Does It Feel, which came out two weeks before…). 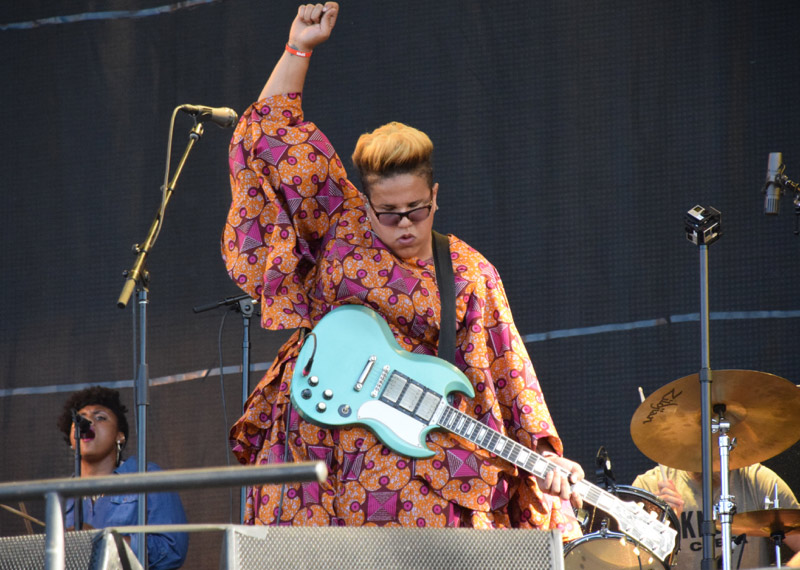 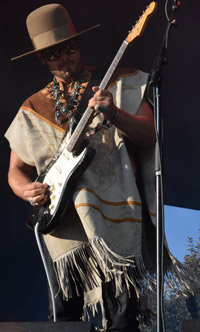 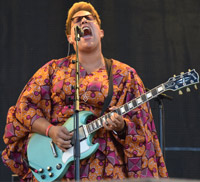 Alabama Shakes brought Southern-fried blues & soul to the Samsung Stage, though it was a little hard to see Brittany Howard belt & rock as the wind threatened to lift the covering on the equipment in the pit in front of her up so high as to block the group out. An actual male closed out Day One on the Sprint Stage, Gary Clark Jr. His neo-blues, which is really just blues done by a contemporary artist (kind of like ‘alt-country’), isn’t exactly revelatory, but he does it well. And his poncho- and sombrero-wearing guitarist clearly wants to be Jimi Hendrix, but what’s wrong with that? It’s worked well enough for Lenny Kravitz all these years… 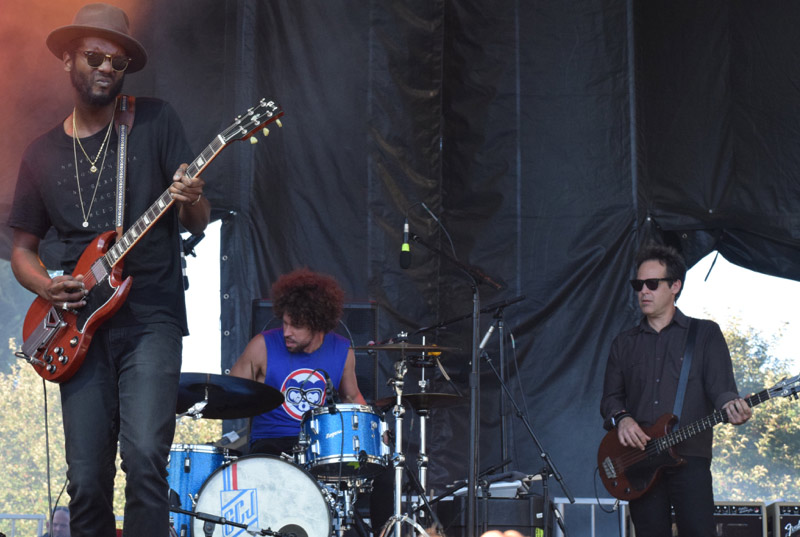 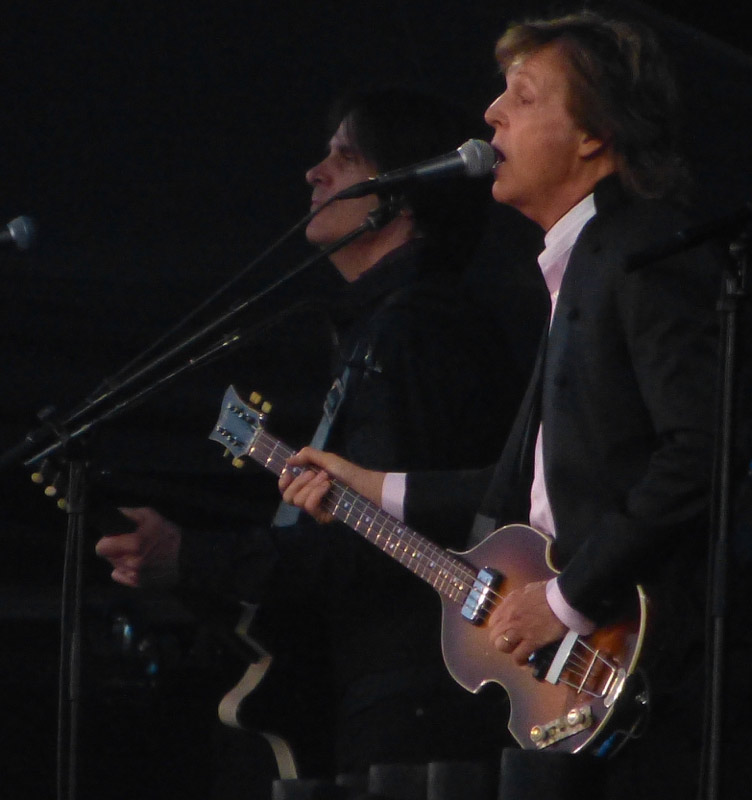 A man who could & did name-check Hendrix headlined Friday at Lollapalooza on the Samsung Stage: Paul McCartney. The former Beatle (as if you needed to be told that) played a massive set for a massive crowd, which stretched as far as the eye could see (and the security barriers would allow). He & his band opened with “Magical Mystery Tour”, and the set seemed to go ‘one Beatle song, one not,’ before getting even heavier on the Fab Four at the end. Perhaps because it was a festival set, Sir Paul knew he had to play the hits, though also did “one for the Wings fans!”, “Let Me Roll It” (plus of course “Band On the Run”, “Live and Let Die”, and a few others), and a few of his own from more recent times, such as “My Valentine”, which he said he wrote for his wife Nancy.

But this was a performance about seeing a Beatle play Beatles songs. It was great to see that the crowd wasn’t all old-timers, but people whose parents and even grandparents listened to The Beatles (finally getting their music on iTunes has paid off…). McCartney did “Blackbird” and his solo song “Here Today” solo, dedicating the latter to “my friend John,” saying that the piece is about all the things you didn’t say to people who left you too soon. He also joked at that point about the audible beats coming from Perry’s Tent (from Dillon Francis), saying that he “planned this … It’s like a mash-up between me and whatever shit they’re playing,” miming the beats. Some will say that McCartney’s just a cranky old man and he ‘doesn’t understand the kids these days,’ but people have been saying that for decades – hell, the people who were saying that in the eighties are old enough to be complaining about the kids in these days – but McCartney’s still here & still drawing massive crowds, and his songs are still great; will today’s hot EDM artists still be filling stadiums in fifty years? 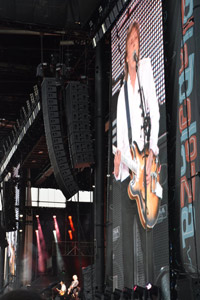 John & Jimi weren’t the only ones who got the nod from Paul (Jimi’s nod came in the form of a guitar solo, plus a story about Hendrix going out of tune on stage, then asking to the crowd if “Eric” was in the crowd and would come up and retune his instrument – “Eric” being Eric Clapton…). McCartney said that, “Most people don’t know this, but George was a great ukulele player,” and played “Something In the Way She Moves” solo on ukulele before the whole band broke in – and how great it would be to be the guitarist who gets to do that solo? Indeed, McCartney still played bass on some songs – imagine being his bassist? Most pressure since… Ringo’s drummer.

McCartney joked about playing “Back In the U.S.S.R.” in Red Square (a song so old it’s come back around again), and had fireworks for “Let It Be” and at the night’s finish. He closed with “Hey Jude”, which is special coming after this year’s death of one of its subject, Cynthia Lennon. Naturally there was an encore (admittedly you knew the performance was going until 10:00 PM), with almost all Beatles songs (save first piece, Wings’ “Hi, Hi, Hi”), including “Can’t Buy Me Love” because he has to do one of their early mop-top pop hits, and “Get Back” with special Alabama Shakes’ Brittany Howard, and ended with “The End”.

All in all, while obviously there were other songs that you wanted to hear (your correspondent wanted something from Rubber Soul, his favorite Beatles record – not necessarily the best, but his favorite), it was what you were looking for from Sir Paul McCartney at Lollapalooza.