The sun came out for the weekend at Lollapalooza '16....

Before heading to Lollapalooza on the weekend, your correspondent went to the ‘So Miami’ Lounge at Renaissance Hotel. While it was at capacity, after one snarky tweet from yours truly, they let suddenly let media in. The rooftop bar/lounge was beautiful (though hardly looked at capacity), with free mimosas and Bloody Marys. Unfortunately the hors d’oeuvres were all done, but your correspondent ate the fries left unattended by someone in the most Jim Gaffigan moment that one could have without a Hot Pocket.

After the cloudy skies the first two days, the very Miami sun came out, but with a breeze that kept Lollapalooza from its second great worry: unbearable heat. Though there were still massive crowds, particularly at the entrances on the higher-draw weekends, when the kids come out (reportedly including the Obama children – your correspondent did see some undercover FBI agents enter on Thursday…). The Joy Formidable were still able to rock the Bud Light Stage early on, as well as be their always-charming selves up there, but more importantly hung out with your reporter in the press tent, even seeming to out-and-out recognize him, after having done an interview with QRO at Riot Fest last fall (QRO interview). 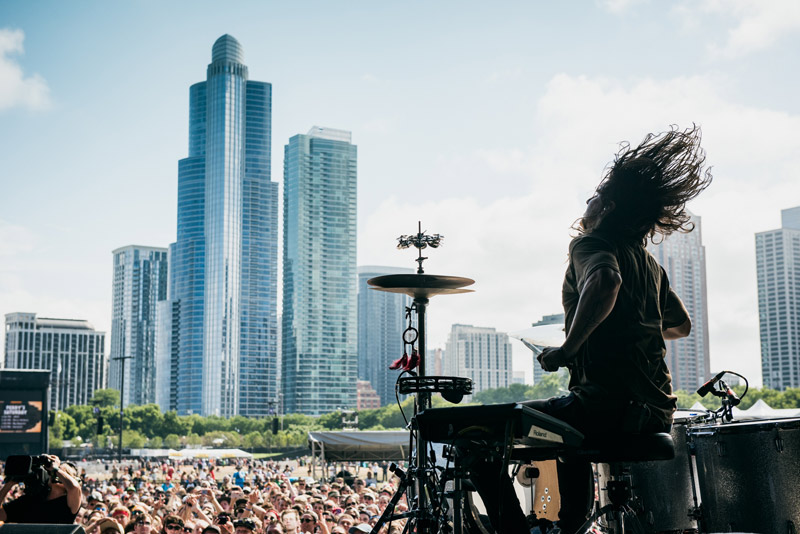 When The Front Bottoms delivered in 2011 with their self-titled debut album (QRO review), they were definitely in the snotty punk side of things, but by the time they hit the Lake Shore Stage at Lolla ’16, a few more albums in have given them an indie edge (no doubt helped by having on bass & backing vocals Kevin Devine – QRO interview), though still with the conversational Hold Steady side of things. 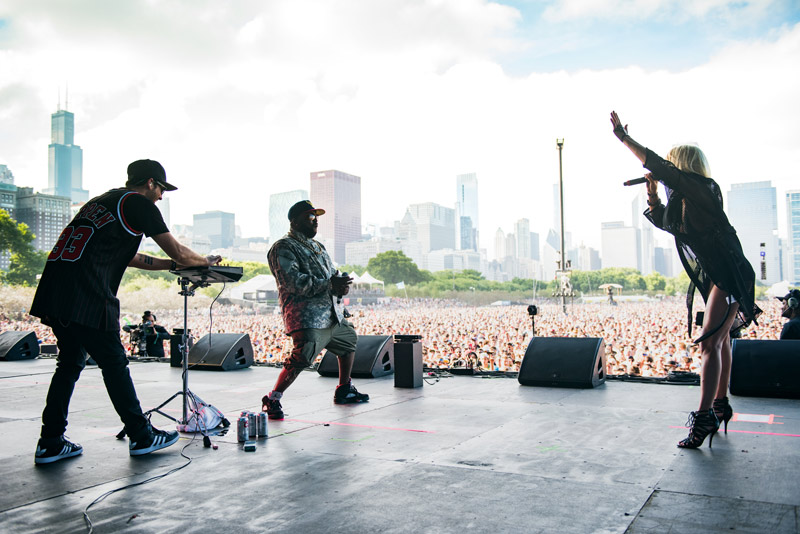 When one heard that Big Boi and Phantogram were teaming up as ‘Big Grams’, it kind of seemed destined that they would end up playing the Samsung Galaxy Stage at Lollapalooza. A team-up that makes sense, as Big Boi knows about team-ups, being one-half of OutKast (who headlined that very stage two years ago – QRO photos), and hip-hop + electronica is a mash-up for two of today’s popular musical styles. It could feel a little ‘designed for commercial appeal’, but it’s certainly better than rap-rock or dub-metal… 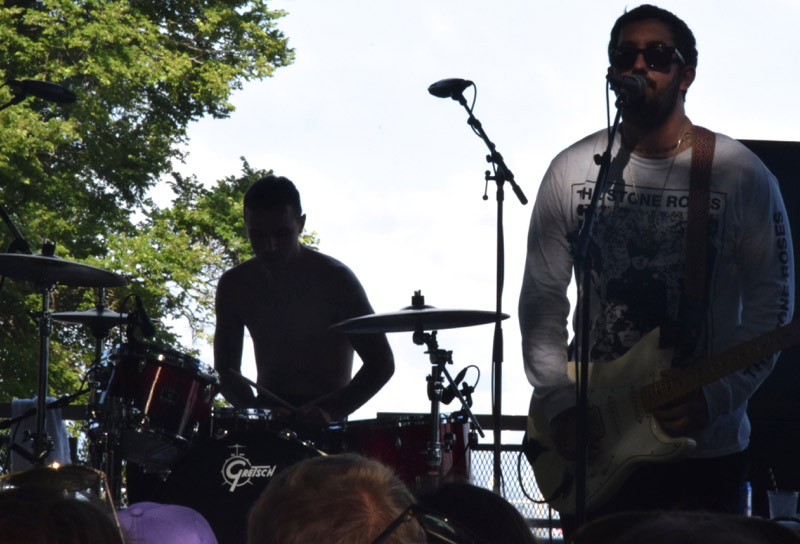 The BMI Stage has a very different feel than the rest of Lollapalooza, being a much smaller stage in the shade, looking out on Lake Michigan. It also has smaller artists, but there’s usually a good chance that one of them will be playing a bigger Lollapalooza stage in the near future (Halsey did it from last year to this…). Nothing jokingly introduced themselves as Jane’s Addiction, and thanked the crowd for going to their festival for the last twenty-five years – but they also had songs about death that even the little kids could rock out to (though the kids seemed more engaged than the hipsters in the audience). 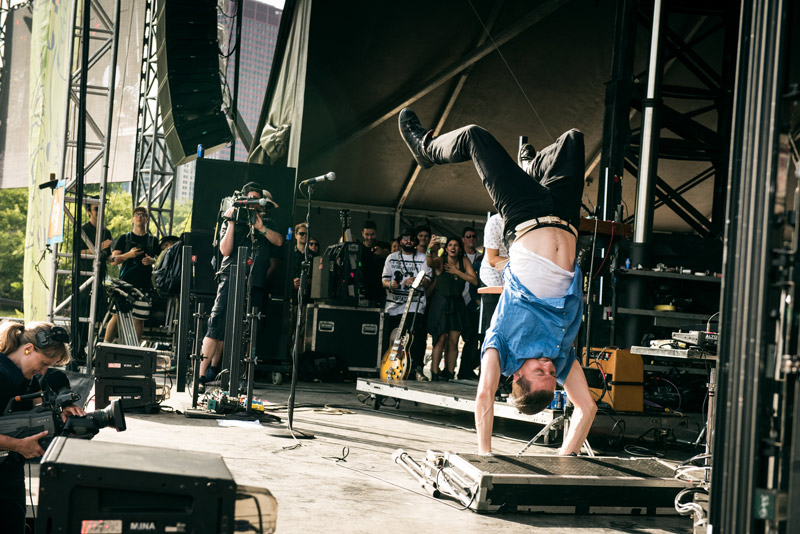 Saturday did have a variety of soulful sounds, from the neo-blues of Leon Bridges on the Bud Light Stage to country-folk Nathaniel Rateliff & The Night Sweats at Petrillo Bandshell, but maybe a more unique take was MUTEMATH at the Lake Shore Stage. The group sounded sweet on first listen, but there were also uncompromising math-rock elements lain underneath. And singer/keyboardist did a handstand on his broken keyboard, plus crowd-surfed on a LED mattress. 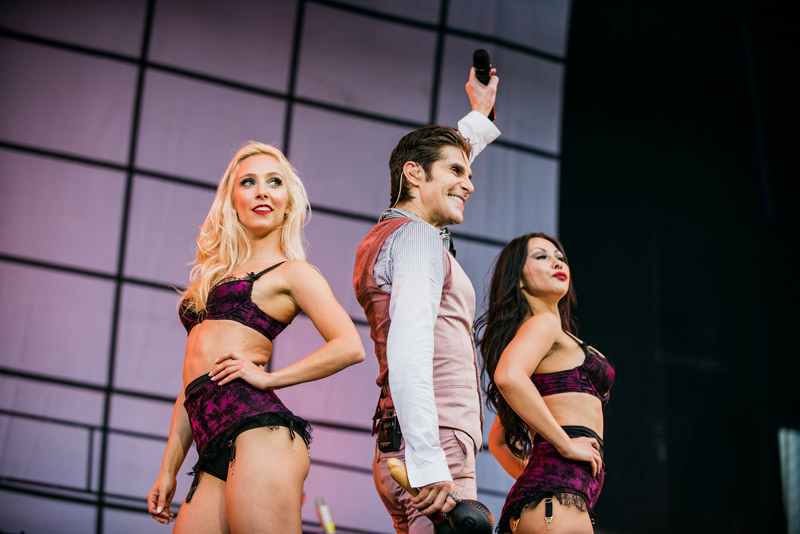 “Here we go!” With that ecstatic (if expected) start, Jane’s Addiction took the Samsung Galaxy Stage. Their farewell tour is what started Lollapalooza twenty-five years ago, and while Lollapalooza has adapted over the years more than the sporadically active Jane’s, they still knew how to put on a show. Indeed, by all rights they should be headlining, but playing the main stage before their Los Angeles contemporaries Red Hot Chili Peppers (see below) was apt. They didn’t just play the hits at their festival, and it’s remarkable that they’re all still healthy up there (Farrell even mentioned his first time in Chicago long ago, cold and on heroin). Perhaps they looked a little silly up there, dressed up like it’s L.A. in the eighties, complete with Farrell’s purple suit and Suicide Girl dancers, but so be it. And Farrell knows how to introduce guests, like Tom Morello (of nineties Lollapalooza act Rage Against the Machine, his own solo career, and soon his team-up with Public Enemy, Prophets of Rage) for “Mountain Song”, and on the “Jane Says” closer, while drummer Stephen Perkins joined Farrell & guitarist Dave Navarro at the front of the stage on Caribbean rhythm, none other than Jimmy Chamberlin (of another nineties Lollapalooza act, Smashing Pumpkins), took up the regular drum kit. 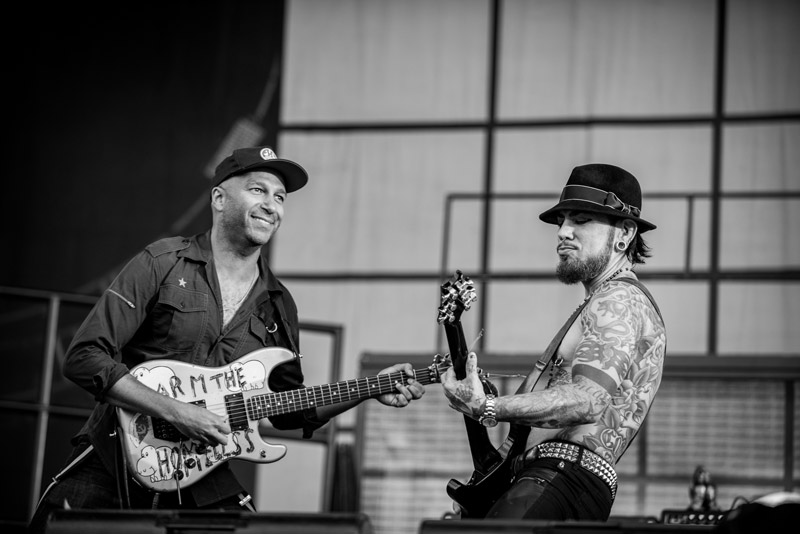 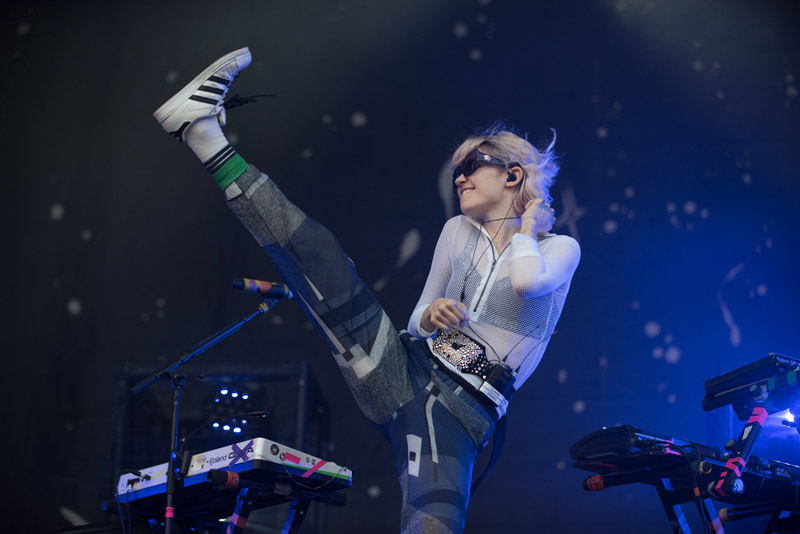 Closing the Lake Shore Stage was an artist who has skyrocketed in fame, Grimes. Once upon a time a strange Vancouver girl who sounded more like a Scandinavian songstress, she has since blown up, everywhere from last year’s hit Art Angels (QRO review) to being signed by Jay-Z’s management company (even hosted the MTV Video Music Awards red carpet coverage at some point…). Yet this was not some über-successful artiste phoning it in, but an electric artist who can still rock out on guitar. Yes, there were dancers, but she’s long had dancers on stage with her (QRO live review). The biggest response might have been for Art hit “Scream” (where she did a Russian version, because she doesn’t know the Mandarin done by Aristophanes on the original), but Claire Boucher still has the adorable ‘oh my gosh’ attitude to where she has gotten. 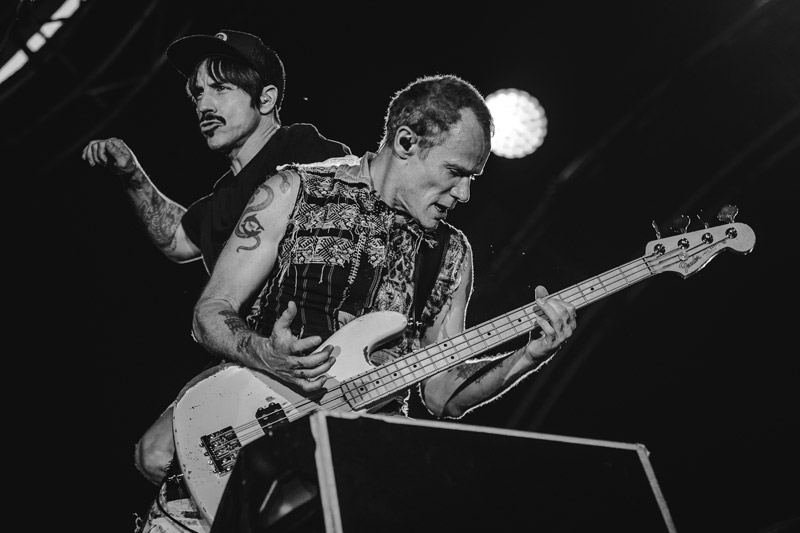 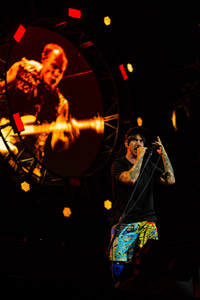 Red Hot Chili Peppers are a lot like Lollapalooza: have been around a long time, and straddle alternative & mainstream, plus just huge. There was wild, but much of it felt like ‘scheduled wild’ – kind of like the Chili Peppers in general. Yet there were still special moments, such as when singer Anthony Kiedis noticed the active deaf interpreter on the lowered stage portion (between him & a camera) during “Under the Bridge”, and he went down to sing directly to her (which made for some awesome big screen visuals). The group also hasn’t lost their energy despite the years; perhaps most recently thanks to new guitarist Josh Klinghoffer on their last two well regarded records, The Getaway (QRO review) and I’m With You (QRO review).