Girl power and alt-success defined the final day of Lollapalooza 2017.... 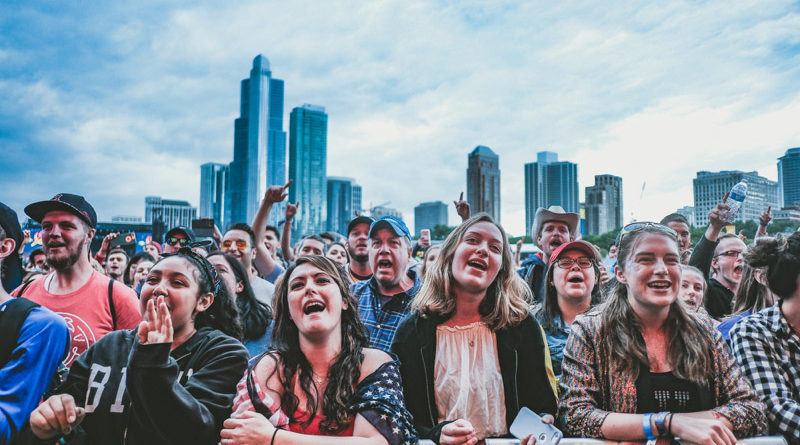 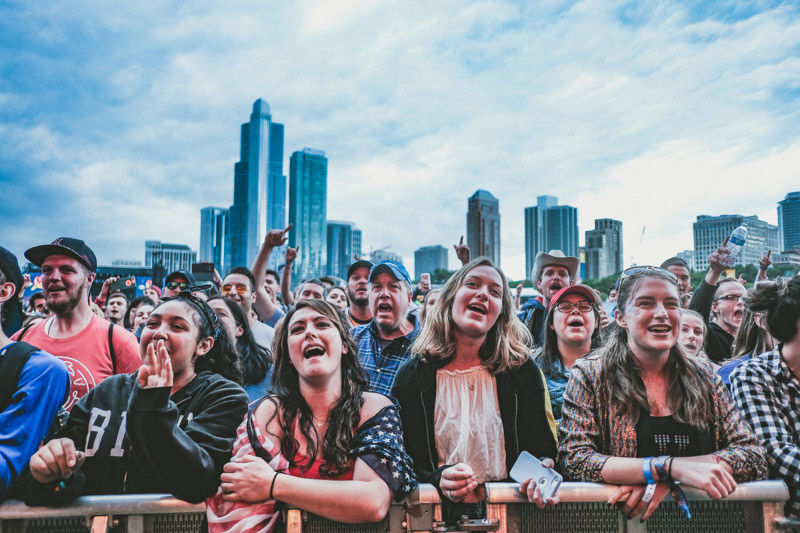 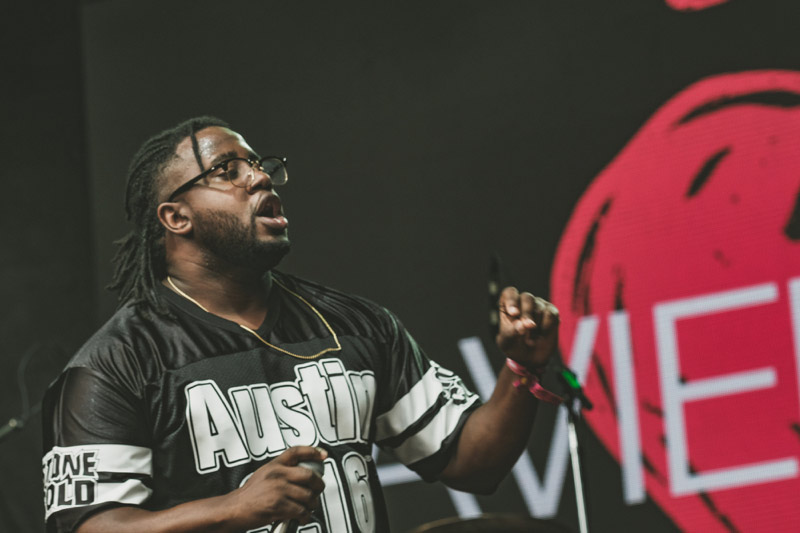 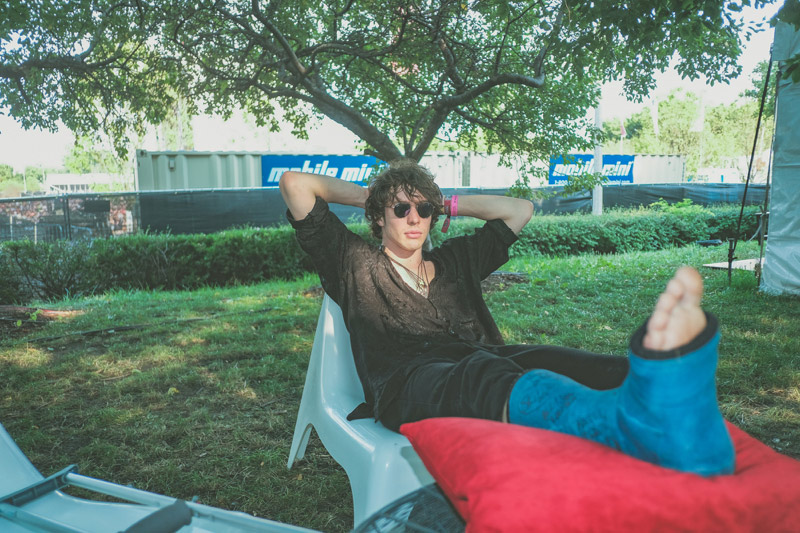 The final day of Lollapalooza ’17 started with the likes of Xavier Omär at the Pepsi Stage, Barns Courtney at Bud Light Stage, and the expectedly machine gun fire rapping of Lake Shore Stage’s Machine Gun Kelly. 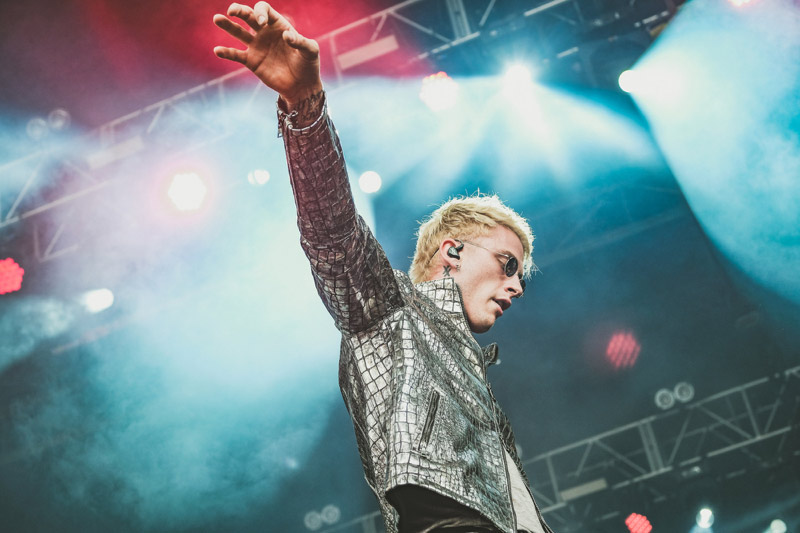 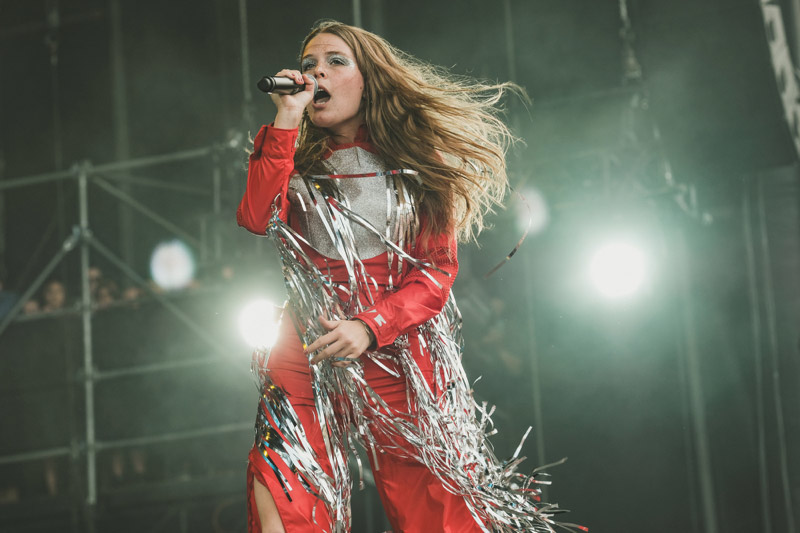 Also expected was the soulful singing of Maggie Rogers at the big Grant Park Stage; not expected was her great spangly outfit. She joked that the thing about only having an EP out was that it’s really not enough for an hour set, so she pulled out some new pieces to go with her hit “Alaska” that got her on the big stage. 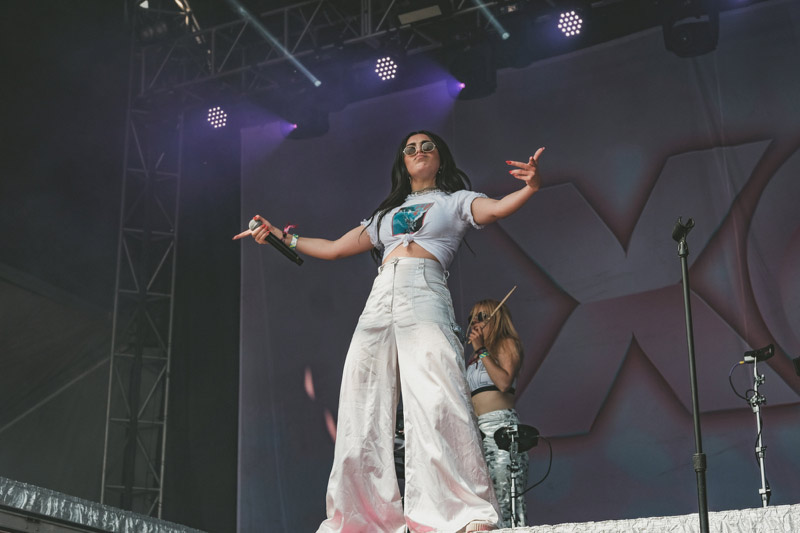 With more than one hit was Charli XCX at the Lake Shore Stage. Yes, she did “I Love It”, the piece she co-wrote made into a hit by Icona Pop (QRO spotlight on), as well as her own hit “Break the Rules”, getting many girls in the crowd onto shoulders for that song. But the really special moment was when Charli, after talking about girl power, covered the one-and-only Spice Girls’ one-and-only “Wannabe” with her own Girl, Halsey. The crowd went nuts – even though a good percentage of the young audience hadn’t even been born when “gotta get with my friends” came out twenty years ago. And Charli followed that by thanking the boys with her latest hit, “Boys”. 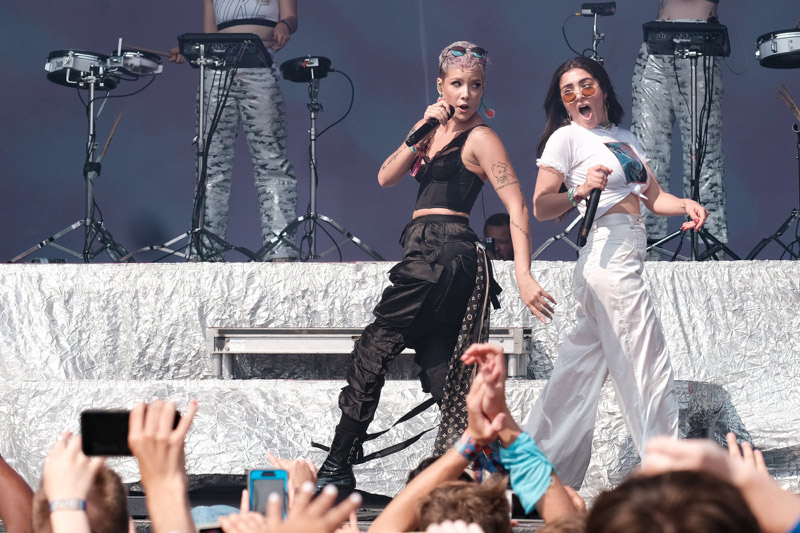 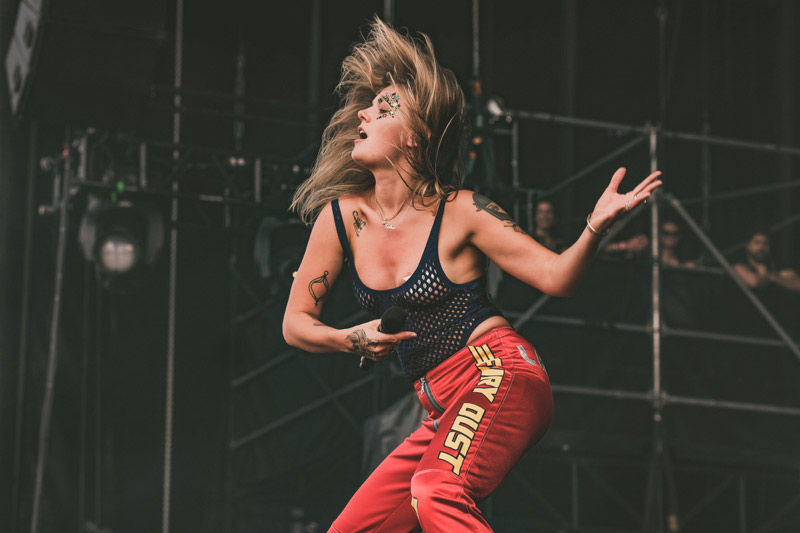 Keeping the girl power pop-dance going was Tove Lo over on the Grant Park Stage. Tove talked about playing Lollapalooza for the first time two years ago (QRO photos), and went into the extended photo pit to embrace fans. Shifting lady Lolla to getting a little older was the beauty from London Grammar at the Lake Shore Stage, though couldn’t be as engaging as the young Charli & Tove. 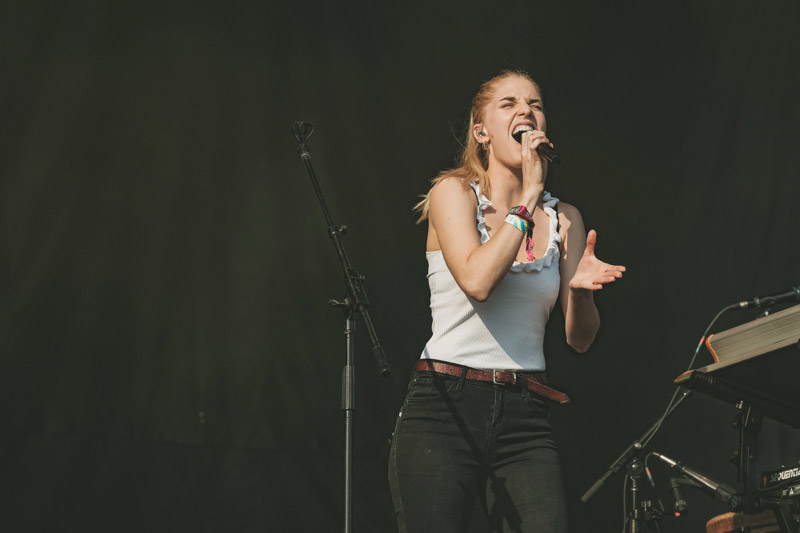 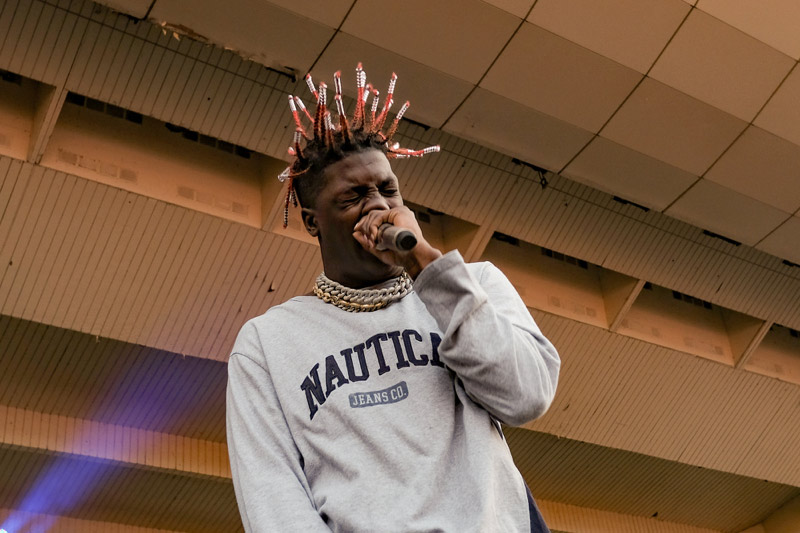 While Lil Yachty delivered a somewhat sonically muddled, if still enjoyed by his large legion of loyalists, set at Tito’s Stage, it was time for The Shins on the big Grant Park Stage. James Mercer’s band has always had a reputation for sensitive boy emotion ever since the Garden State-assisted breakout, but they actually have a lot of upbeat, life-affirming songs – and at a festival, those are the ones that shine. Mercer seemed in particularly good spirits, remarking joyously, “We’re allowed to have fun!”, as well as checking to see how much of their crew is from Chicago (then asking the crowd. 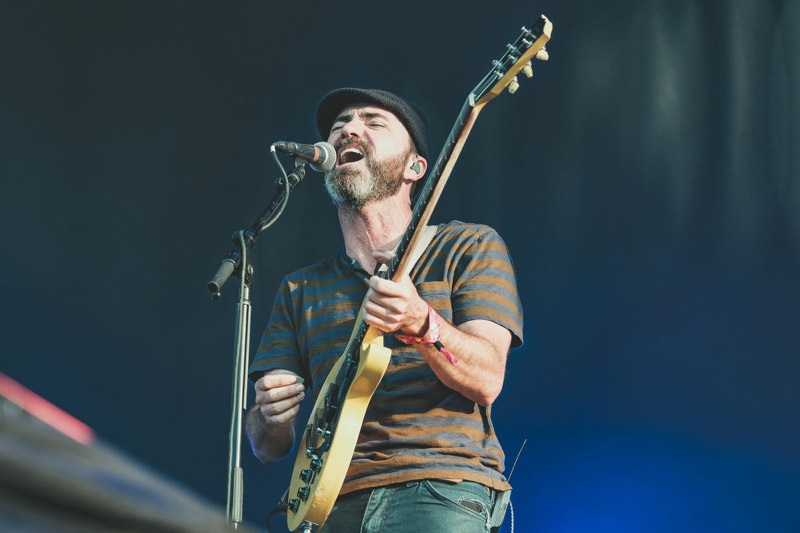 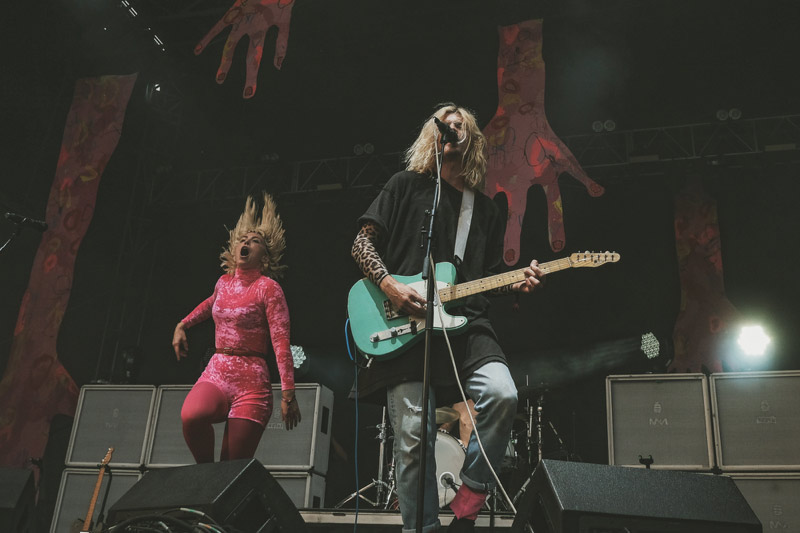 Always having fun on stage is Grouplove. Earlier this year the young act had to cancel some shows because of vocal issues from just-had-a-baby singer/keyboardist Hannah Hooper (QRO interview), but that didn’t show at the Lake Shore Stage. While they might not win any indie-cred awards (purists will of course poo-poo their covers of Beastie Boys classic “Sabotage” & David Bowie classic “Space Oddity”, two songs that have been covered a lot in the last few years), Grouplove are the kind of band that you can bring your kids to see. They found time to do a brand new song, but of course still closed with their breakthrough “Colours”. It is impressive that they’ve moved up this far, this fast, on the festival track. 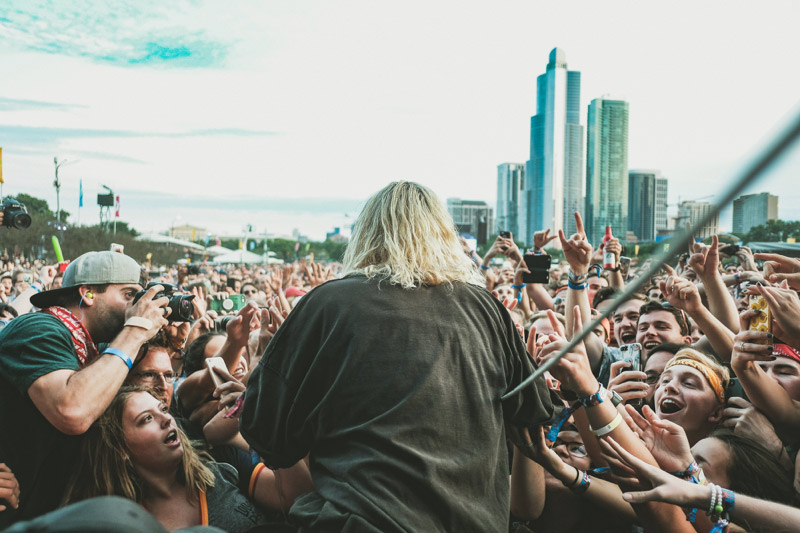 ‘This far’ because they served as opener for the last big headliner of Lolla ’17, Arcade Fire. No alternative band since Radiohead has gotten this big (who headlined last year), turning their new releases into Kanye-sized events. But the hipsters who fell in love with breakthrough Funeral will feel that they’ve gotten too big, and that it’s all gone to their heads. That’s particularly the case with new record Everything Now (QRO review), which doubles down on the disco they didn’t need to introduce on prior album, Reflektor (QRO review). It can come up self-indulgent on their part – but they also aren’t owned by their past.

And it should be said that the new songs did well live (helped by not playing Everything’s weakest two, the band’s weakest two, “Chemistry” and “Peter Pan”). Their dance element definitely lends itself to the live setting, but of course they pale in comparison with the old material (but what wouldn’t?). “Rebellion (Lies)”, for instance, is so awesome to see in the epic Lollapalooza setting, whereas new pieces like “Signs of Life” can just feel like any other big dance-rock band. One can even feel that what’s important to them is that they’re having fun, not necessarily the crowd – but then Will Butler will go into said crowd for “Rebellion”.

And they definitely still enjoy playing the old stuff. Régine Chassagne’s “The Sprawl” had them get the crowd to hold their phones up, and that wasn’t the only time that Arcade Fire gave their songs the epic giant stage that they deserve. Indeed, their Lollapalooza set didn’t give the indication that they’ve gotten too big, as they closed with a combo cover of John Lennon’s “Mind Games” and Radiohead’s “Karma Police”. 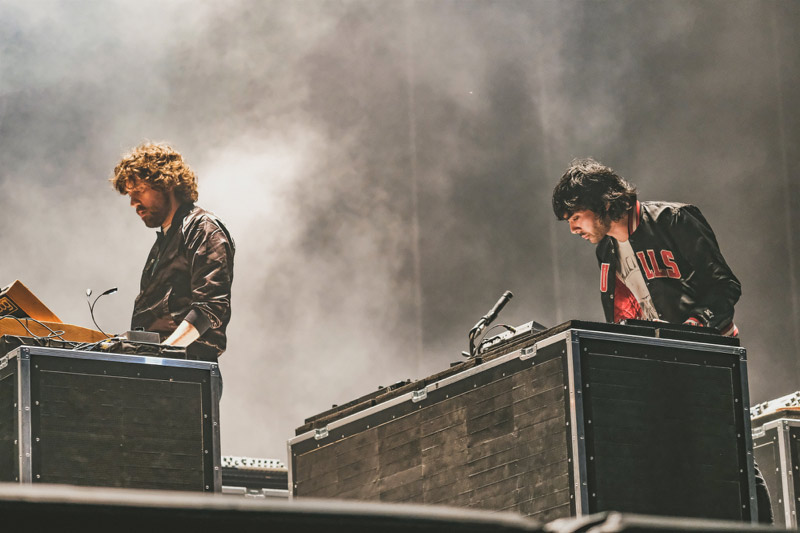 When your aging hipster correspondent was looking forward to seeing Arcade Fire for the umpteenth time as he took the Red Line down to Lollapalooza earlier in the day, the high school/college kids around him were going to the festival for Justice. Like The xx up against Chance the Rapper the night before, it was a good pick to have a very different artist up against Arcade Fire, with the famed French DJs on the Bud Light Stage.