The first day of Lollapalooza '17 opened well, but was unfortunately ended early due to rain.... 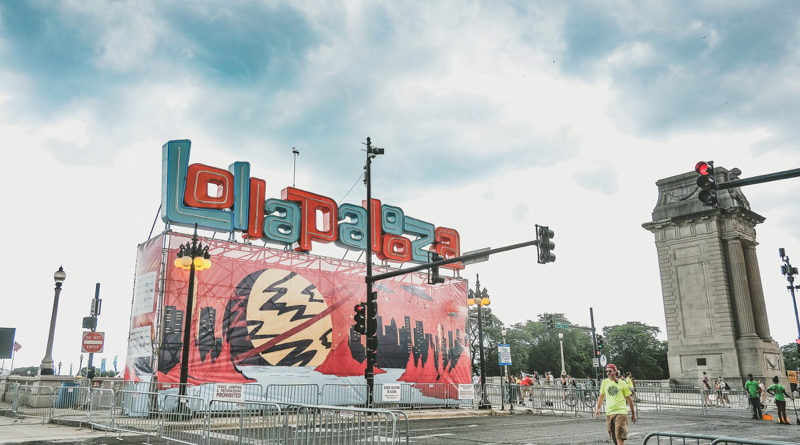 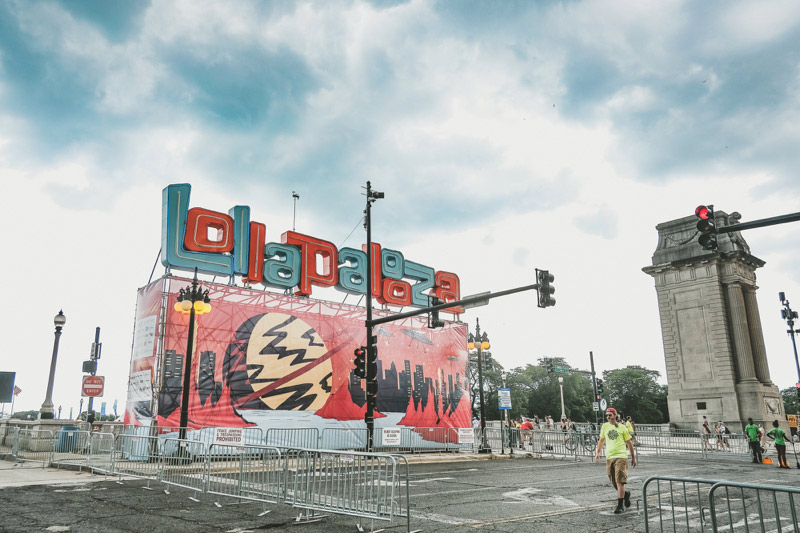 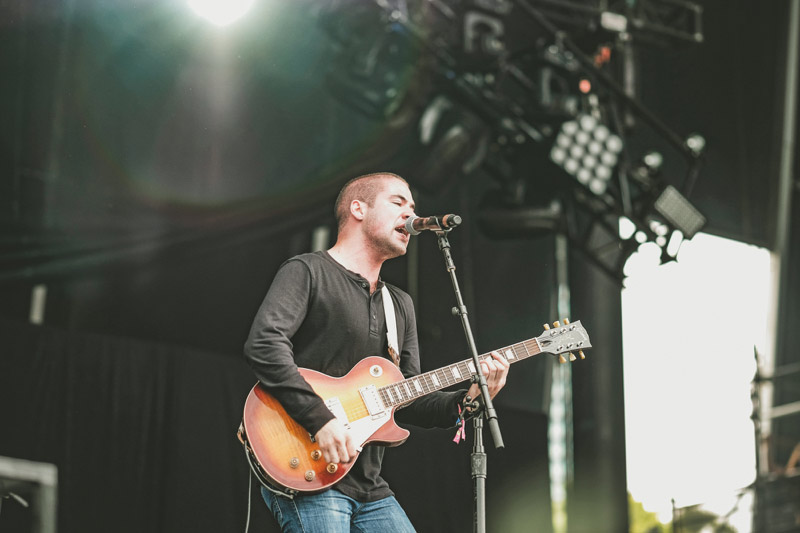 Opening up Lollapalooza ’17 was Declan McKenna at the Lake Shore Stage, and his nicely emotional rock was not a bad way to start the festival. Following up was White Reaper on the big Grant Park Stage. Maybe they’re not The World’s Best American Band (QRO review), but still pretty good. 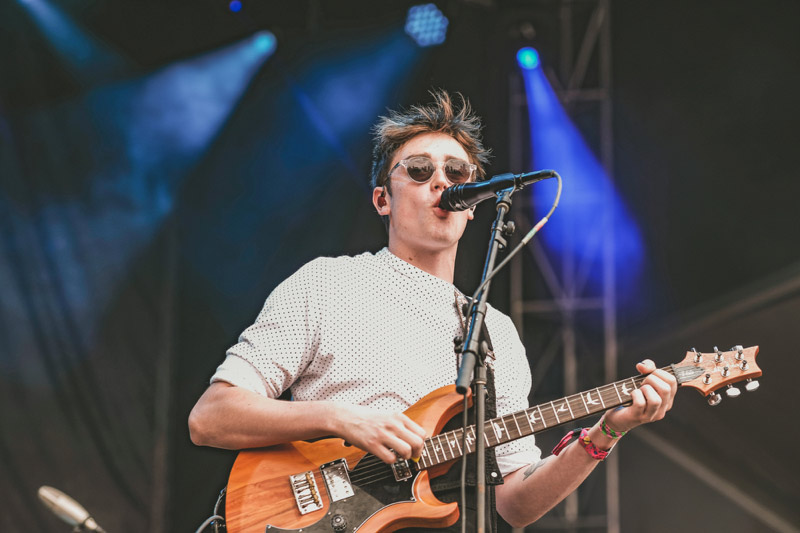 On the other side was Hippo Campus at the Lake Shore Stage. The group had a pretty good-sized crowd for how early it was, but their pleading, emotional ‘pretty boy with his heart on his sleeve for every girl’ music was not that impressive (unless you’re said girl, or at least think you are). Similarly, some people have been impressed by England’s Temples, and some people haven’t (QRO album review). Their Grant Park Stage set wouldn’t change either group’s minds, with the band’s psych neo-Beatles. 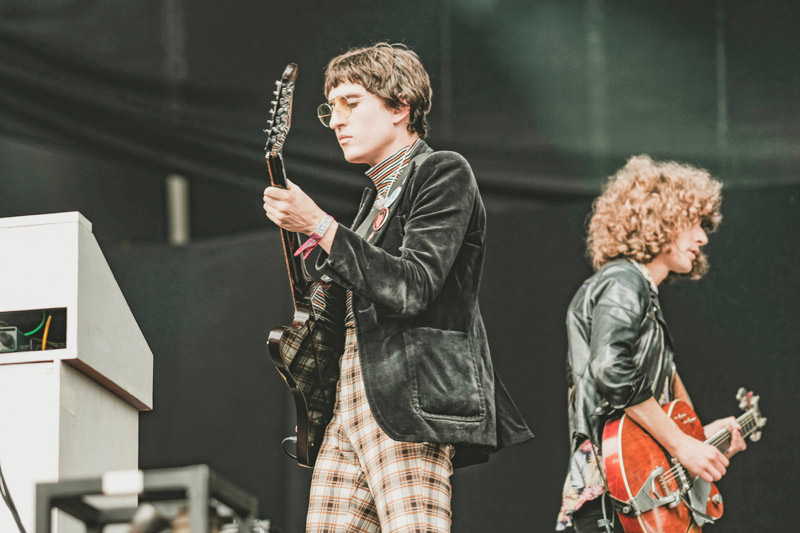 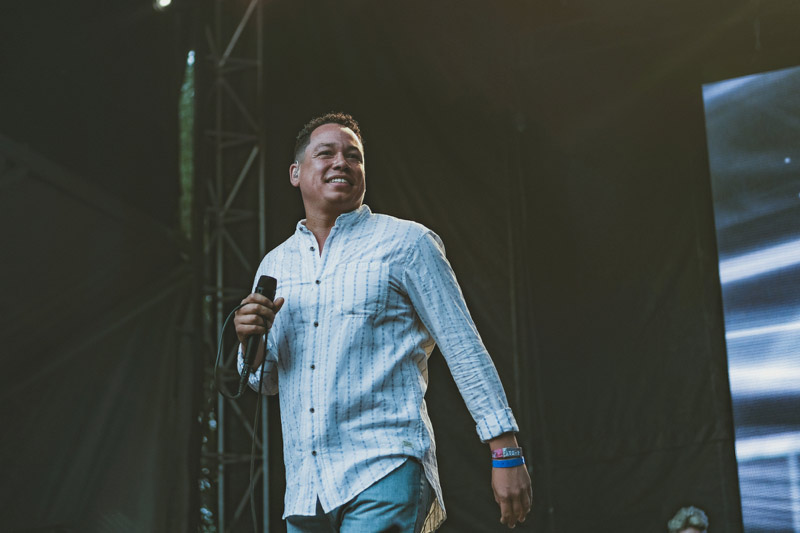 Between the two main stages & their slightly smaller siblings, there are the stages set in the middle of Grant Park, nearer Buckingham Fountain (made famous in the opening credits for Married… With Children). Perry’s Stage is the home of EDM at Lollapalooza, while Kidsapalooza hosts children’s acts, and your correspondent avoided the kids at both for wildly different reasons. But there is also the Pepsi Stage, situated nicely under the trees, but still big enough for acts like The O’My’s. Just overlooking Lake Michigan is the small BMI Stage, which holds up-and-coming artists like Michael Blume in an intimate setting. 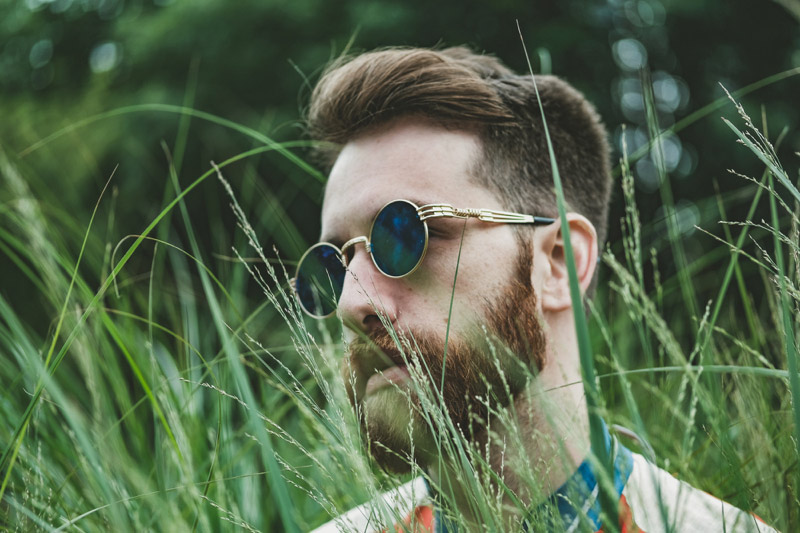 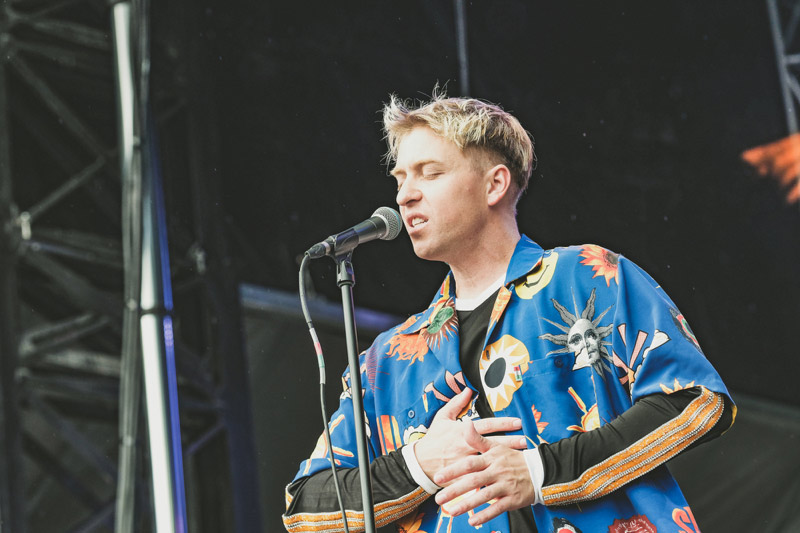 At the Lake Shore Stage, the crowd seemed to actually shrink from Hippo Campus’ to The Drums’, which was too bad. Singer Jonathan Pierce has an upbeat Morrissey sound/vibe (so not Moz’s self-righteous preachy side…), and a strong festival presence. At the other side of Grant Park, Capital Cities delivered relaxed, upbeat dance music of their own at Tito’s Stage. They were really nice for the late afternoon point in the day, just enough dance without being overboard & forced [cough-Perry’s Stage-cough]. 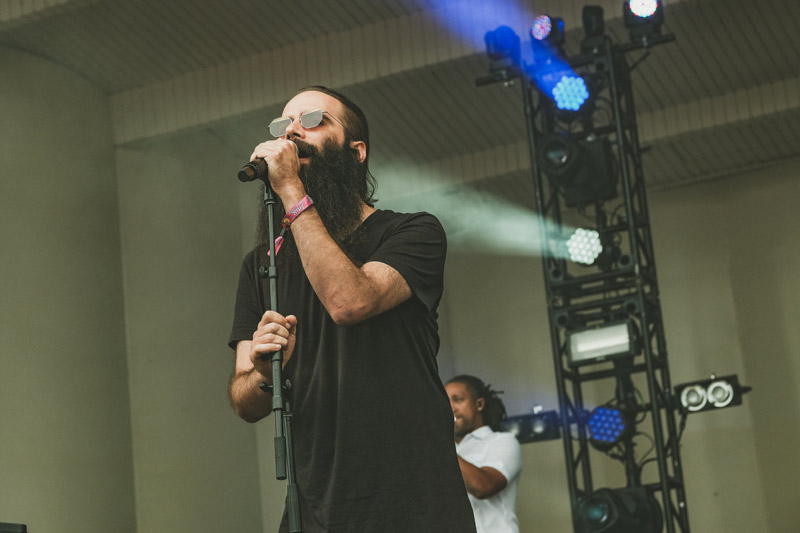 Remember Oasis? Remember Liam Gallagher? Not, not Noel Gallagher (QRO live review), Liam Gallagher – the brother who was the singer, not the one who was the guitarist/wrote the songs. Well, Liam is back with his own solo career (after fronting his forgettable Beady Eye – QRO photos at a festival), and came to Lollapalooza for a set that was scheduled way earlier than Oasis ever was. A good percentage of the young crowd probably think that Oasis is ‘classic rock’ – to be fair, they do sound like actual seventies classic rock…

The self-described “rock and roll star” did do an Oasis classic, “(What’s the Story) Morning Glory” early in the set – and then walked off the stage after four songs. Liam said on Twitter later that his voice was messed up from his show the night before (where he didn’t do an encore), but certainly didn’t sound messed up live, nowhere near ‘walking off the stage’ worthy. Maybe it was all a publicity ploy, as it did make him a trending topic on Twitter. But someone should tell Liam that it’s 2017, not 1997 – and that he doesn’t have his brother to fill in on vocals while he carps from the balcony. 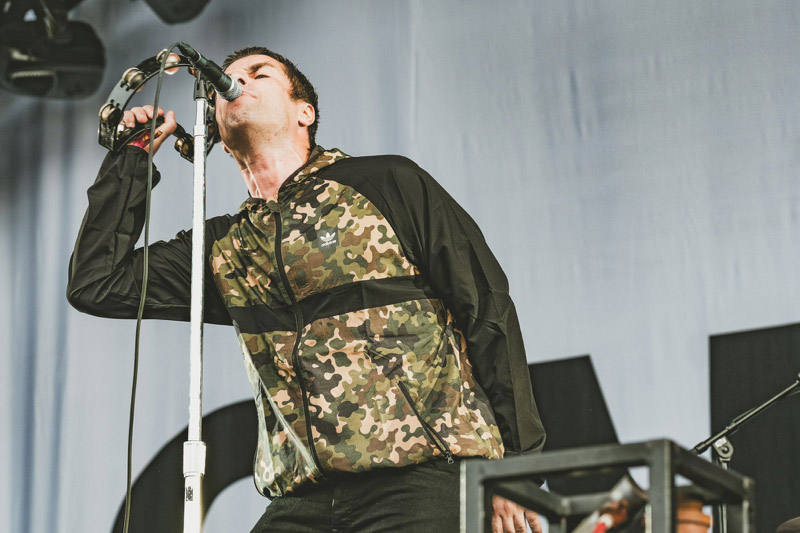 Meanwhile, Migos had a delayed start on the Bud Light Stage, but for the contrastingly completely reasonable reason that his flight to Chicago was delayed. Britain’s George Ezra came on time at Lake Shore Stage, kinda country, like mass appeal country, though done by an Englishman. So not that interesting… 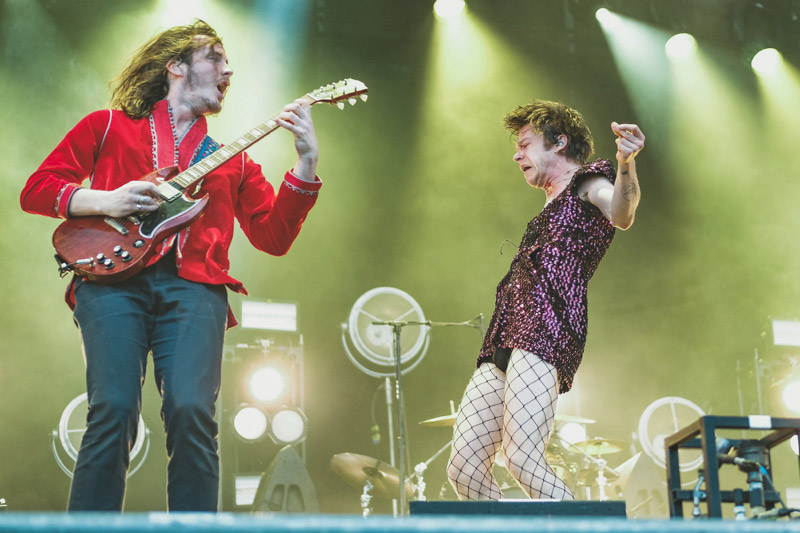 Cage the Elephant have become known for their live shows, particularly at festivals. Even those who don’t know the band have been impressed by their festival performances, wild events that include singer Matthew Shultz doing something crazy, at least. Their set at Lollapalooza’s Grant Park Stage was that, suitably southern grit & wild. While they might not be the most inspired or original band (they did win a Grammy, but so did The B-Sharps…), they definitely do strong live shows, all wildness up there on stage like a band that sounds like them should be. 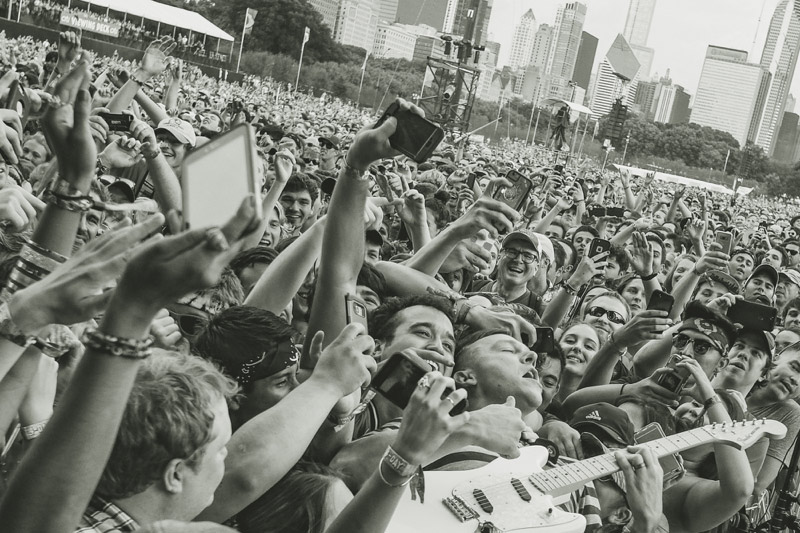 At Lollapalooza ’17, Shultz wore a dress and fishnet stocking, later to take off the dress, and preached “One love, one race.” Of course he went into the photo pit, early & often, rocking out there & with fans at the barrier. He even thanked the people who put on festivals across the country, name-checking C3 Presents. Though one shouldn’t forget about how active the rest of the band is – they might be tied to their instruments, but rocking as hard as they can as well (like guitarist/older brother Brad Shultz playing while crowd-surfing early on). 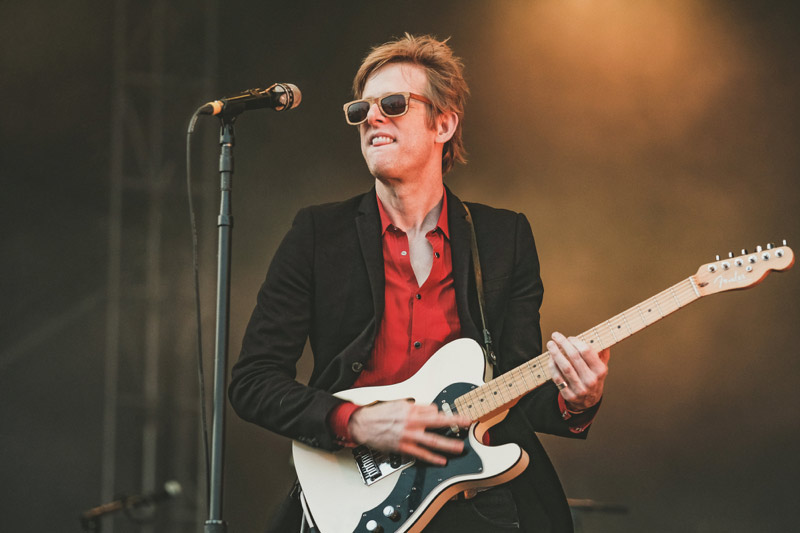 Last weekend, Austin’s Spoon played an underwhelming set at Panorama Festival in New York (QRO recap). Their Lollapalooza performance at Lake Shore Stage was naturally quite similar (including “I Turn My Camera On” third, while the photographers were still in the pit…), but the un-tented stage and bigger crowd gave them more room to have fun, as opposed to just being cool. Also, for the established indie-rock band, this is a festival that they’ve done before (QRO photos at Lollapalooza ’14). Unfortunately, rain did come down during their set, and “The Underdog” still needs to be done with horns – and they were a little overshadowed by Cage’s wild set before, the rain during theirs, and Muse after them. 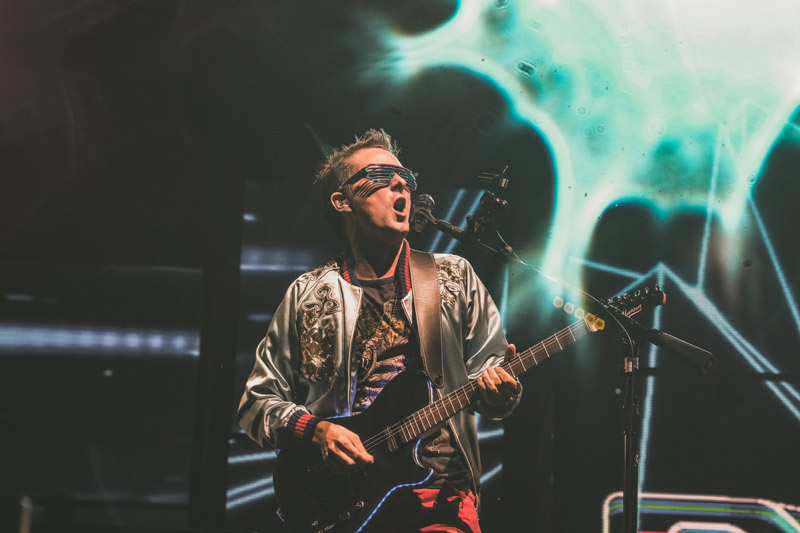 Even with the on/off, hard/none rain, Muse was of course epic in their rock. But the rain got harder & harder, and at 9:08 PM, singer/guitarist Matt Bellamy told the audience that the band was being told that they have to leave the stage, “Not sure why, but we’ll find out.” They even said that “Muse wants to play,” but no dice – not just Muse at the main Grant Park Stage, but all the artists, including Lorde at the other end Bud Light Stage, was forced to close. Not the first time weather has messed with Lollapalooza (QRO recap of the year with an evacuation), and unfortunately will not be the last. 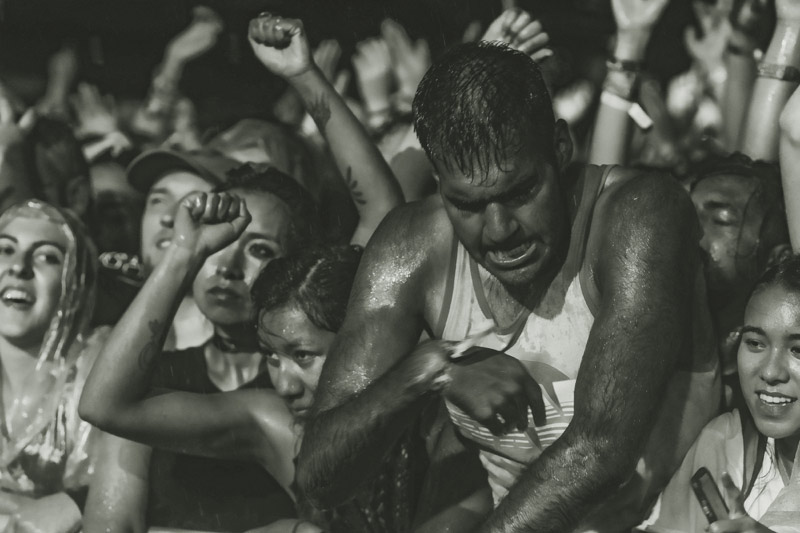