It was a full, if slightly backward-looking, Day Two at Lollapalooza... 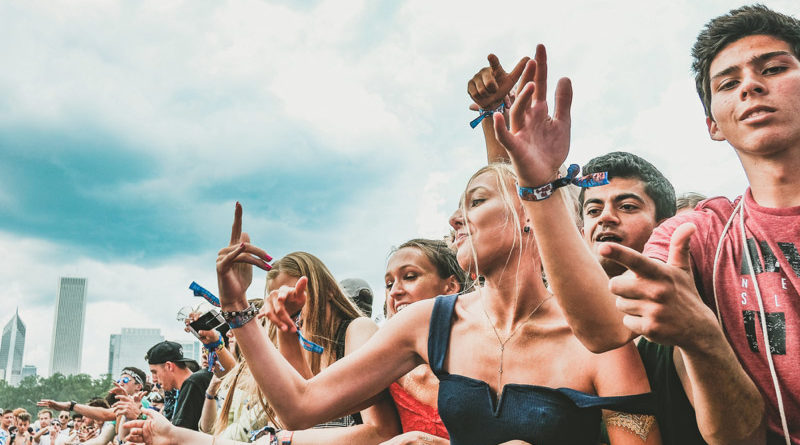 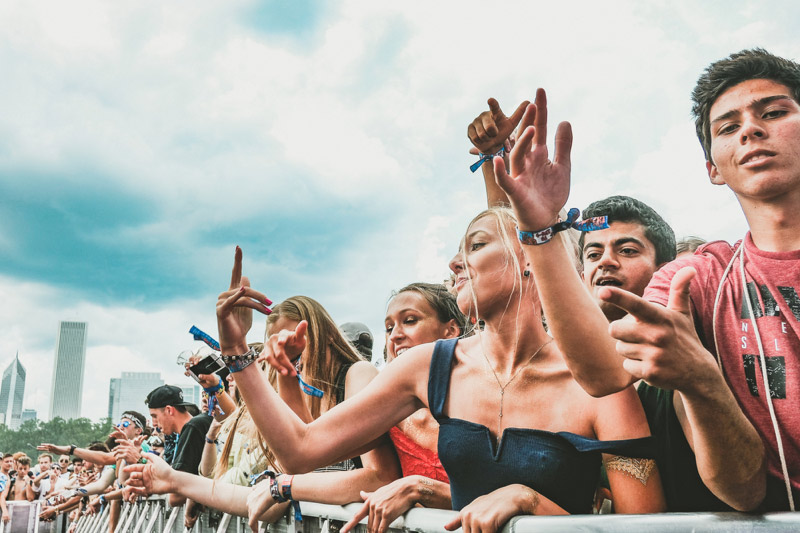 After a storm forced the early closure the day before, the skies looked overcast & ominous on Friday, bordering on out-and-out cold. However, there was only a slight rain in the early evening, and the full day happened. 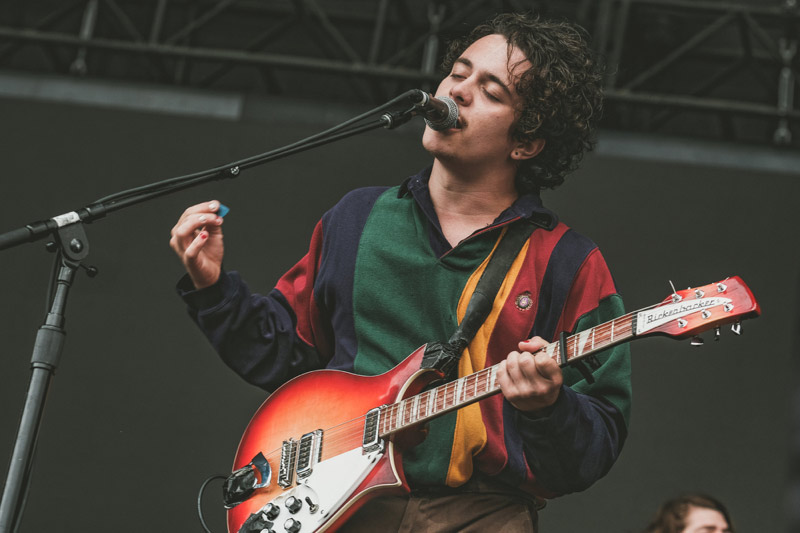 Opening the main Grant Park Stage were The Districts, who good emotional rock, though perhaps it was too early (and a little too cold) for the emotion. Opening the nearby Lake Shore Stage was lady soul from young lady Bibi Bourelly, who had been moved later thanks to The Pretty Reckless cancelling. 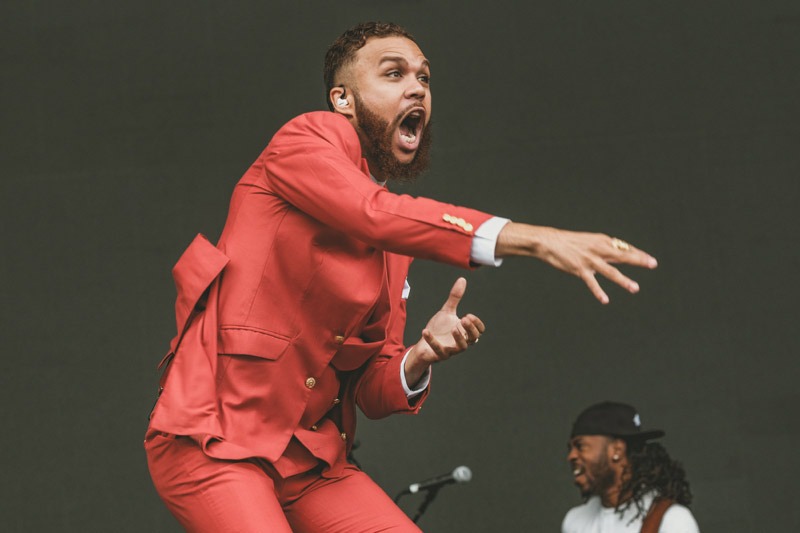 It was a ladies man, Jidenna, who took the Grant Park Stage, though a ladies man who also rocks. Always appreciate it when an R&B singer has a full backing band – and one that dances. Back over at the Lake Shore Stage were the also moved later Lemon Twigs. When keyboardist Danny Ayala couldn’t get his instrument to work, singer/guitarist Brian D’Addario covered for him by covering R. Stevie Moore solo. D’Addario made sure to cite Moore, and indeed generally seemed to introduce every sunny pop-rock song that the band did. 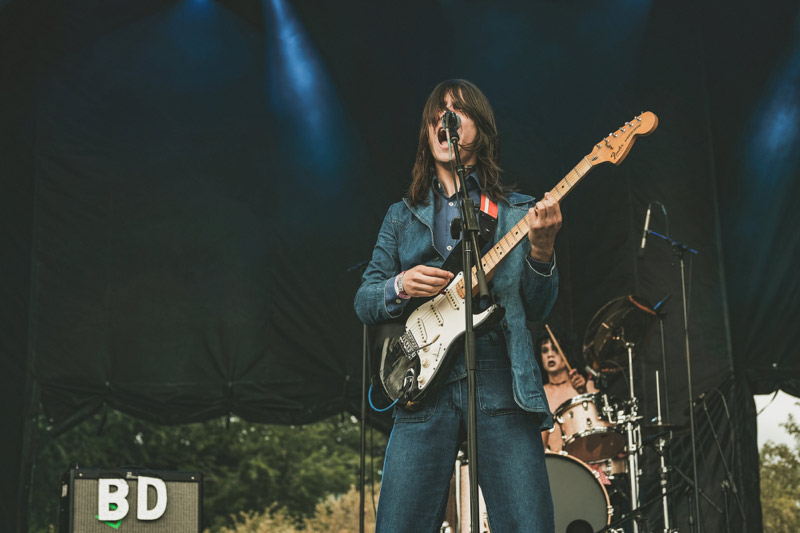 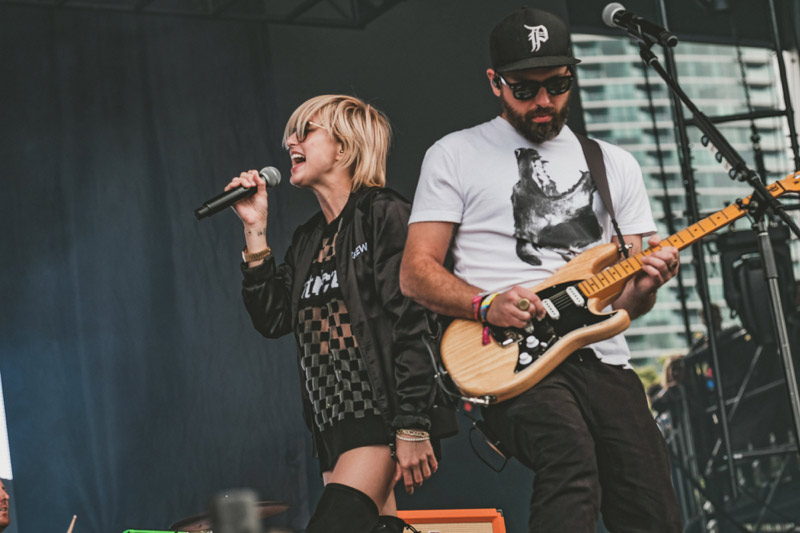 “This is when we start to fuck up your shit – in the nicest way possible…” Such was Phantogram on the Grant Park Stage. They delivered some strong emotional electronica, which they’ve been doing for longer than today’s newer hit acts. They mentioned it was their fourth Lollapalooza, most recently last year with Big Boi as Big Grams. More up-and-coming was Bishop Briggs on the Pepsi Stage, with her bordering-on-stealing-the-trademark-from-Björk hair in two tiny buns on the top of her head. 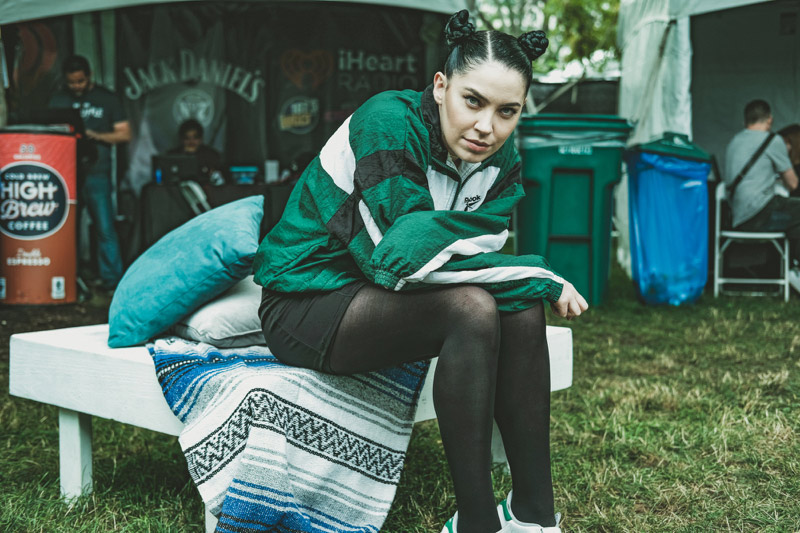 Also not playing their first Lollapalooza was Tegan & Sara, on the other main Bud Light Stage. One joked about the other passing out at their first Lollapalooza, making the news. Later Sara, “Being a gay woman,” recommended Trojan Bareskin condoms & safe sex in general, because all day a plane had been flying over the festival with a banner for the condom brand. Sara even imagined the pilot finding out that she’s gonna spend the day flying the Trojan flag – pointedly imagining the pilot not as “Bob,” but, “Fuck that, Jane.” When Tegan got confused, Sara jokingly accused her fellow feminist of not being able to imagine a female pilot.

But the real great banter from an act known for their great banter (like the prior night at their Lollapalooza after-show – QRO review) was Sara’s growing obsession with the VIP area in the crowd. Cordoned off from the rest of the audience right at the front of the stage, it was really obvious because it was not as crowded. Sara was trying to shout out to all the people on the GA side of the barrier, but instead focused on making sure that the “older” VIPs were putting their hands up with everybody else. Eventually Tegan challenged her sister to go down into the VIP, with which Sara did, and Tegan criticized as rewarding the big spenders, though Sara also high-fived some GA fans at the front (and remarked, upon coming back on stage, that the area smelt like “horseshit”).

And the pair also did songs. They dedicated “Nineteen” to the nineteen-year-olds out there, their “fellow nineteen-year-olds.” A group of girls younger than that next to your correspondent cheered, one shouting, “My ID says I’m 22!” Tegan & Sara got fans to get their hands up during “Hang Onto the Night” – that was when she called out VIP for not participating. Of course the last two songs were big hits “Boyfriend” and closer “Closer”. 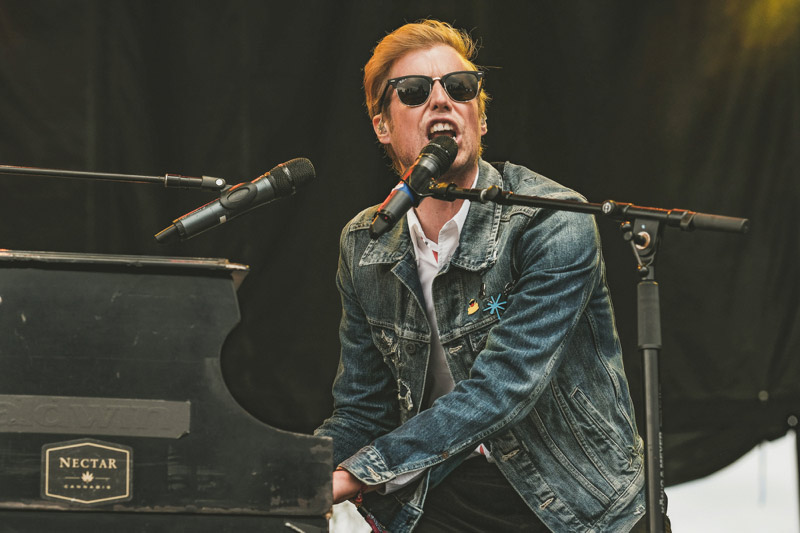 Meanwhile, Andrew McMahon In the Wilderness was climbing on his own piano at the Lake Shore Stage – though didn’t match Sara Quin by going into the crowd, as he had the weekend prior at New York’s Panorama (QRO recap). And Ryan Adams was rocking at Tito’s Stage, even if the sometimes-prickly pear didn’t allow photographers, and his light and video screen show was marred by playing during the day – one does have the feeling that Adams thinks he should be an evening act, even headliner, like he was the day after in Iowa at Hinterland Music Festival (QRO photos). 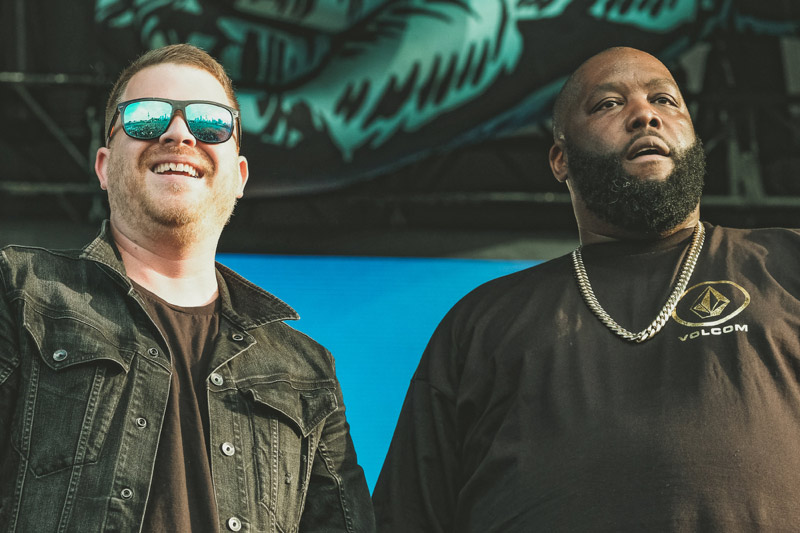 For their opening music, Run the Jewels walked onto the Grant Park Stage to Queen’s “We Are the Champions”, and they really are. As good as the duo’s rhymes are, there are two other things that make them special. One is the rapport between Killer Mike and El-P, really good friends that enjoy playing off each other. Maybe someday they’ll get so big that they want to go solo, but they’re already big, and they already were solo (QRO live review of El-P album release party); indeed, it might be that they had solo careers before their much bigger success together, that they don’t take their partnership or success for the granted, and aren’t sick of each other (think of like every other famous musical duo ever…). The other great thing is that the pair really enjoy their success, and it can be seen.

A fan, Jacob Powell, had a sign asking to go onstage, “Let Me Rap ‘Legend Has It’.” And they did, inviting him (with a thirty second countdown), and Powell killed it, even impressing the duo (with Mike twirling him around). Run the Jewels are that kind of act, the kind who could invite a fan up to perform, but also to ask everyone to take a step back (more than once) after seeing fans up front getting crushed. They dedicated their final song, “Down”, to the just-passed Chester Bennington. 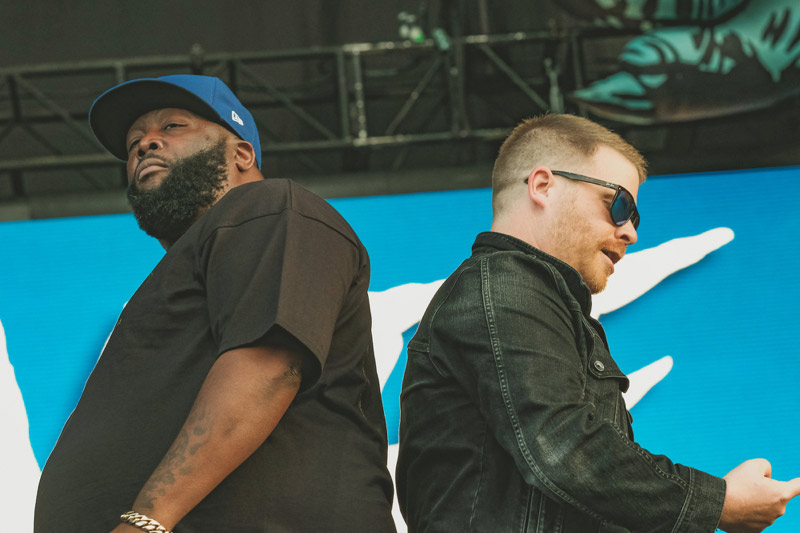 While they’re best known as a spooky act, on the Lake Shore Stage for this festival, Little Dragon was more dance than spook. Singer Yukimi Nagano was draped in white, which did reflect well under the evening festival lights. 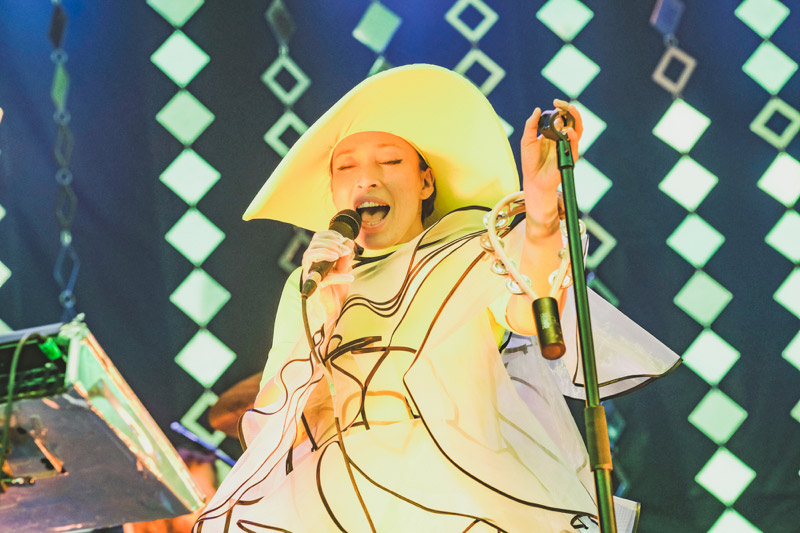 Headlining Friday at Lollapalooza was a big, shiny rock band – The Killers. It’s actually still kind of surprising that they’re still at this headline-a-top-fest level (there were rumblings that they were fill-ins for a cancelled headliner like The Weeknd or even Kanye West). They were among many pseudo-alt rock bands that broke out in the first decade of the century/millennium, and so many of them have fallen by the wayside, or morphed into something else (usually frontman gone solo).

One might not think that The Killers are that inspired, a sort of of throwback to the big pop-rock bands of yore, the kind that dominated the radio when that’s what mattered. But perhaps for younger folks, they feel as important and alive as big pop-rock bands felt to you when you were young. Malia Obama certainly enjoyed them, rocking out so hard that she lost her iPhone in VIP.

The Killers covered Chicago locals Smashing Pumpkins’ “Disarm”, and paid tribute to the band that should have played in full on that stage the night before by also covering Muses’ “Starlight”. Their encore went past the curfew of 10:00 PM, with singer Brandon Flowers more than once asking the crowd if they should keep playing – but you knew they weren’t done until they played original breakthrough hit “Mr. Brightside”, which was the night’s closer. 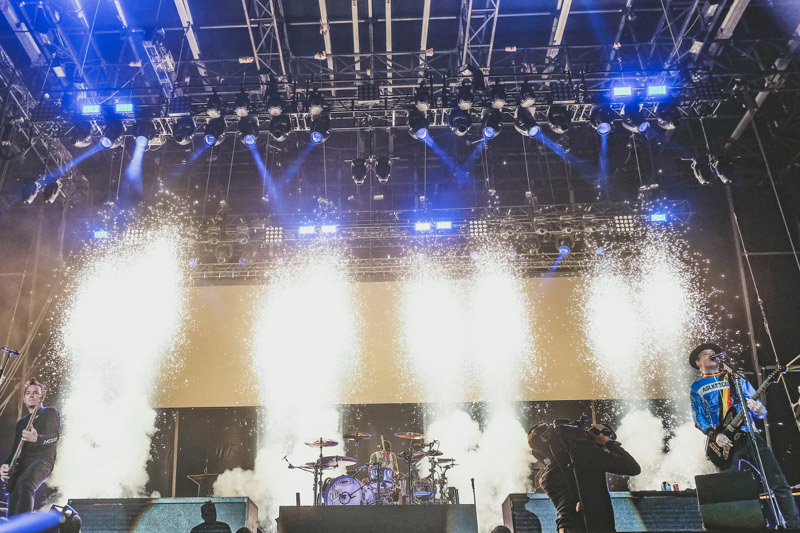 But if you really wanted a throwback to when you were young, and a band that you’re surprised is still headlining the likes of Lollapalooza, there was Blink-182 at Bud Light Stage. The trio is a throwback to youth because their music was always pretty juvenile, if sometimes juvenile in the right ways, and there was that point a decade-plus ago when they seemed to dominate MTV (back when that mattered). Surprisingly headlining because it isn’t even really the Blink-182 of old, as singer/guitarist Tom DeLonge left the band to pursue investigating and revealing UFO conspiracies (seriously), replaced by Matt Skiba of Alkaline Trio, who isn’t some no-name or no-talent replacement, but one can’t help but feel that bassist Mark Hoppus and drummer Travis Barker felt that they needed to keep a fame & financial lifeline going.

However, Blink-182 get major points for earlier this year pulling out of the debacle that was Fyre Festival early, before it was a debacle (if like a day before), and later calling out the plutocratic excess it aimed for. 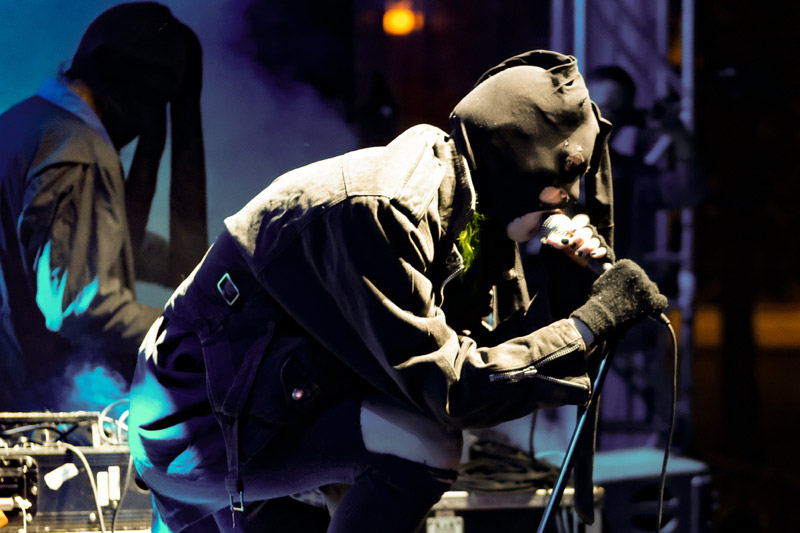 Pepsi Stage had another blast from the past, albeit a very different sort of blast from a much more recent past, in Crystal Castles. Less than a decade ago they were the hottest act out there, singer Alice Glass rocking crowds as enthusiastically extreme as anyone. But then she and songwriter Ethan Kath split, and he hired a new singer in Edith Frances. There is still worthy chaos, but stands in the shadow of what came before (at least they aren’t photo-phobic anymore – perhaps that indicates that Kath isn’t as full of himself, or perhaps that he knows that his best days are behind him).