Saturday at Lollapalooza was a hot one, quite literally.... 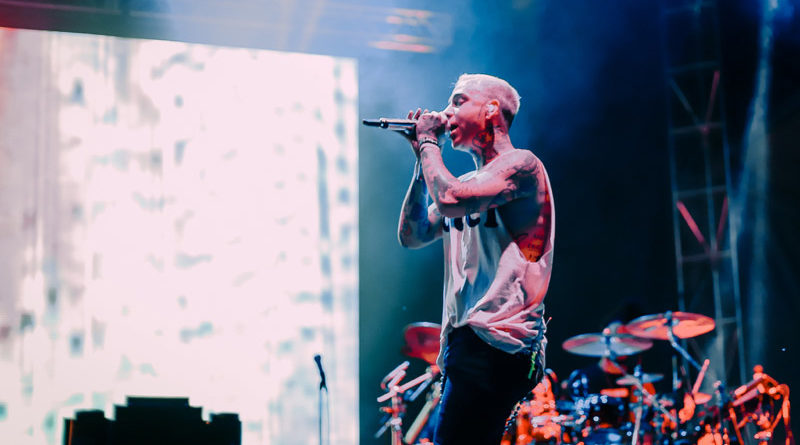 Saturday at Lollapalooza ’18 was a hot one, quite literally, with temperatures way up there and the sun beating down on Grant Park. This made it hard to bounce from stage to stage, especially from one end of the long festival grounds to the other.

But did increase the appeal of the Bud Light Dive Bar Stage, thanks to its shade (and Bud Light). Sur were playing it for the second time in a week, after having done it last weekend at New York’s Panorama (QRO photos). Their sexy modern blues-rock definitely appealed to the kind of Lollapalooza attendees who would go to the small, heavily sponsored stage. Another nice aspect of it was that the acts played on the same floor as the fans, not the big, distant stages of the rest of Lollapalooza, which made it easy for Sur’s singer to go into the crowd.

Meanwhile right over at the Tito’s Handmade Vodka Stage was Tank & The Bangas, who brought their big, brassy sound & persona to Lollapalooza. Highlights included “Smoke.Netflix.Chill”, because they’re just the right sort of band to have a song about that modern activity. They later played the Bud Light Dive Bar Stage as well.  Meanwhile, Pale Waves played in at least some shade at the American Eagle Stage, though the gothic act is used to real darkness. 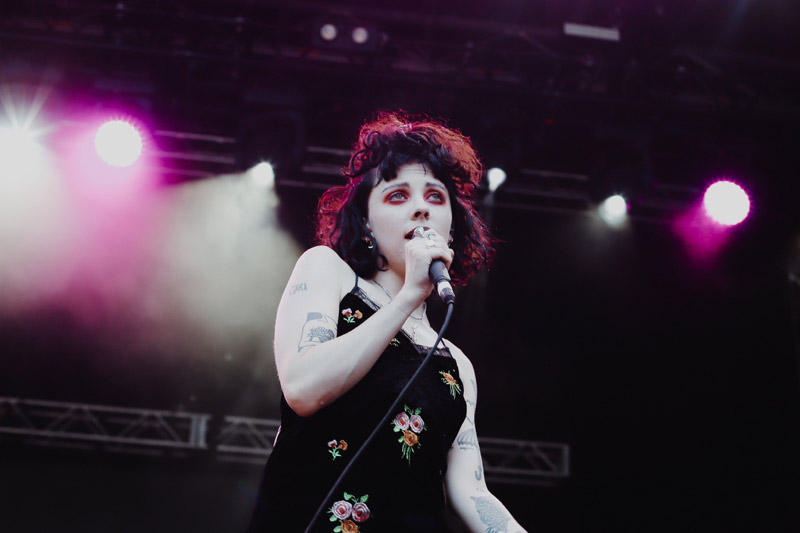 Things were not working out so well for next at Tito’s, Lil Pump. First, the rapper came on late (totally living up to the stereotype). Then he had to keep stopping as fans kept passing out from the heat and EMTs had to be called in. Indeed, at one point he went into the photo pit to try to help, which only made things worse, as fans pushed forward to get a picture of him. And there were problems with his sound cutting off. He seemingly spent more time on the stage arguing with management than actually performing. These kinds of things do unfortunately happen at Lollapalooza (and most any festival), but rarely all for the same performance. 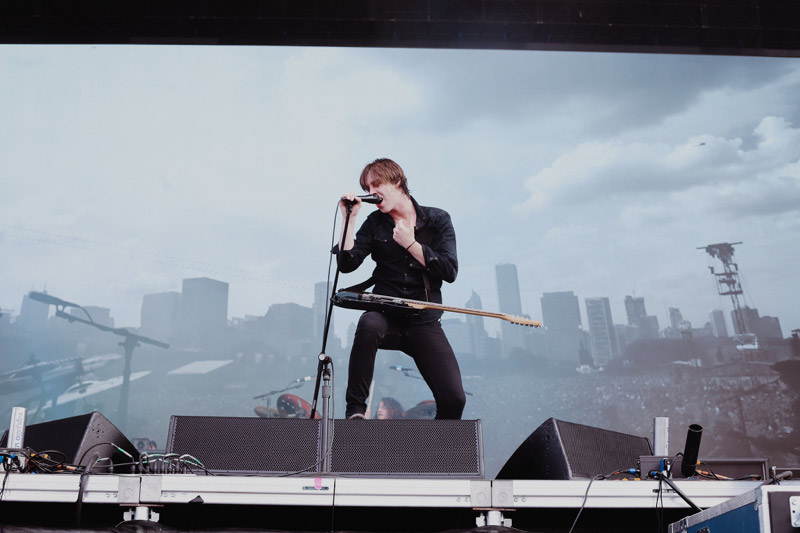 It was all much better at the south end Grant Park Stage for Catfish & The Bottlemen. Like Friday’s Greta Van Fleet, Catfish aren’t exactly reinventing rock ‘n’ roll with their throwback sound, but do have a big stadium sound. One could definitely see why people like them.

The Bud Light Stage featured a notable booking in rapper/actor – by this point, actor/rapper – LL Cool J. His musical career goes back to when Lollapalooza was a touring festival, but he’s since become best known for starring on NCIS: Los Angeles (and thus is the toughest rapper playing a cop on TV this side of Ice T). Yet he’s recently been pushing to revive classic rap, such as with his new Sirius XM station Rock the Bells Radio, and advocated for its resurgence at Lolla ’18. He worked very well with DJ Z-Trip, who actually manipulated sounds (even used turntables) instead of just pressing play & cashing the check (like so many at the EDM Perry’s Tent) – and LL opened with “Mama Said Knock You Out”, in case you weren’t paying attention. Indeed, it was quite a contrast with the chaos of the brand new Lil Pump, showing that veteran professionalism wins out. 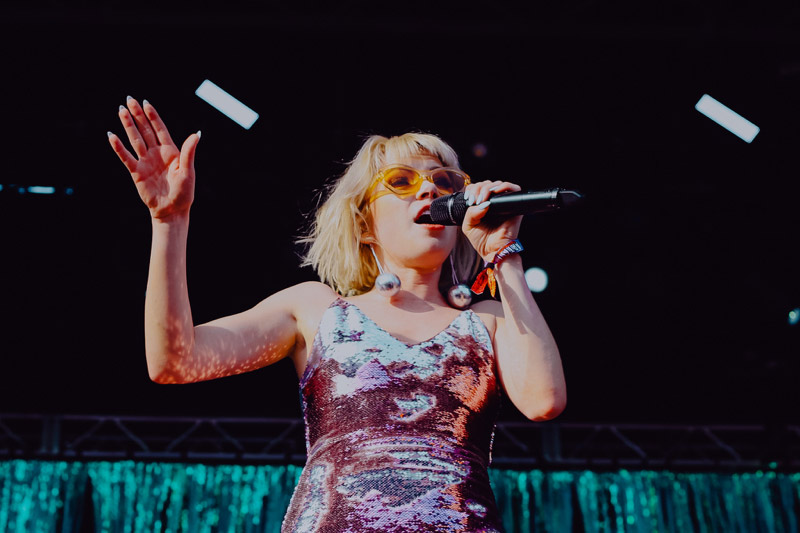 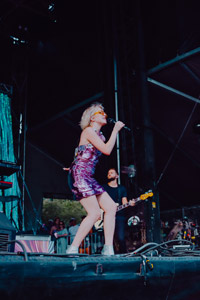 But if you wanted modern pop, there was Carly Rae Jepsen at the Lake Shore Stage. Okay, we are years removed from “Call Me Maybe”, but she’s definitely held her own since then, no maybe about it. Hell, she was given a (fake) sword by fans, because Carly Rae Jepsen does totally deserve a sword. It is interesting how she is welcomed even by the indie crowd – hell, two years ago she played Chicago’s hipster Pitchfork Festival (QRO photos)… 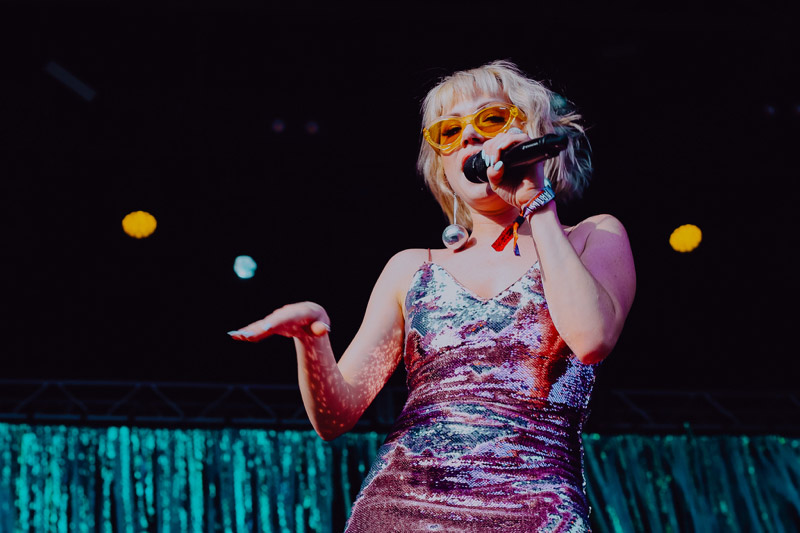 True indie songstress graced the Bud Light Stage: Annie Clark, a.k.a. St. Vincent. Her artistic craft has been more & more perfected, album-to-album, most recently on this year’s MASSEDUCTION (QRO review), and that comes through in her live show. But what was notable was that her live performance, which can be a bit too perfect at times, leaned more into the loose rock at Lollapalooza. Admittedly it was quite similar to her set the weekend prior at Panorama in New York (QRO photos), including the ‘traffic cone orange’ color to her outfit (though it was a more traditional dress, and not some get-up out of Aeon Flux), and that included closing with “New York” – but this time updated it to sing, “Chicago isn’t Chicago without you…” 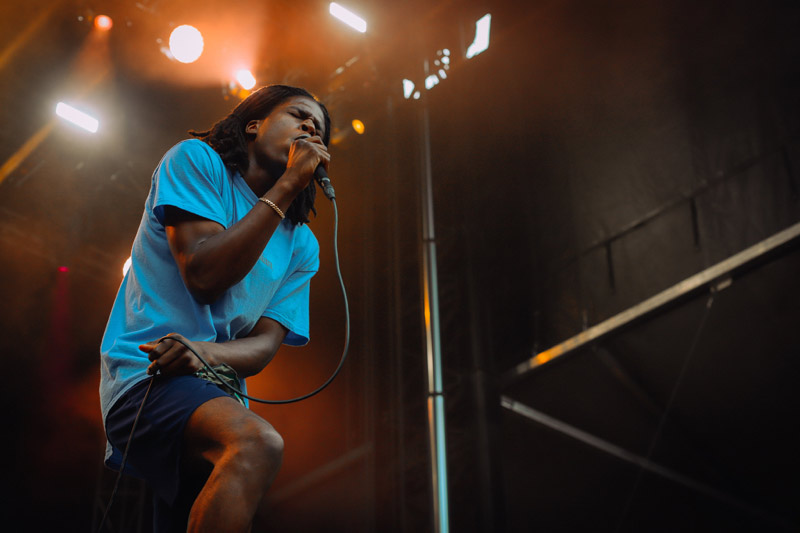 On the more mainstream end of things, after Daniel Caesar sang at the American Eagle Stage, back on the southern end of the festival, was the big EDM singer and presence of Logic, who at the Grant Park Stage did distinguish himself from the ‘push the button and press play’ of Perry’s Tent (if also had a rather aggressive crowd). Following that, across at the Lake Shore Stage, was Dua Lipa, a hot pop star with the chops & big audience to prove it. 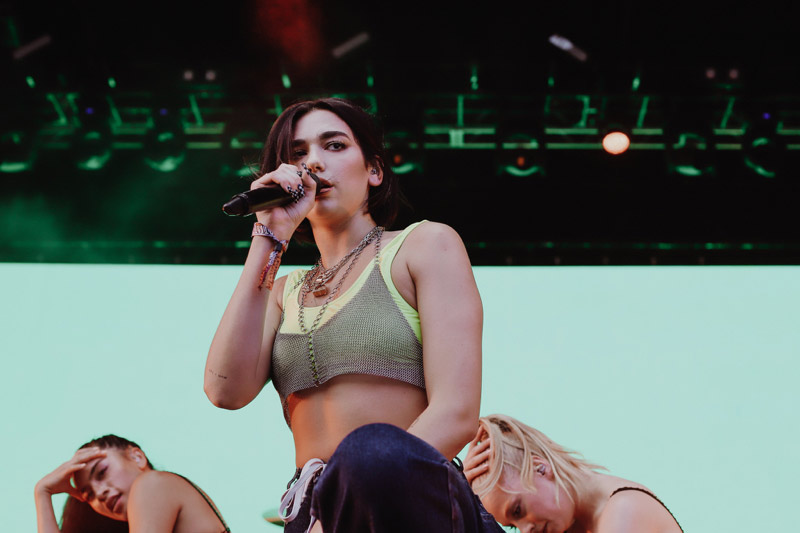 When the Lollapalooza 2018 schedule was announced, there were countless jokes about Vampire Weekend vs. The Weeknd, Saturday at 8:30 PM. First off, jokes about The Weeknd’s name can’t beat Saturday Night Live’s Weekend Update’s ‘The Weeknd Update’ (though VW never got that when they played). And the two acts, while both headline-worthy, are not very similar. Plus jokes about band names are kind of weak in general. 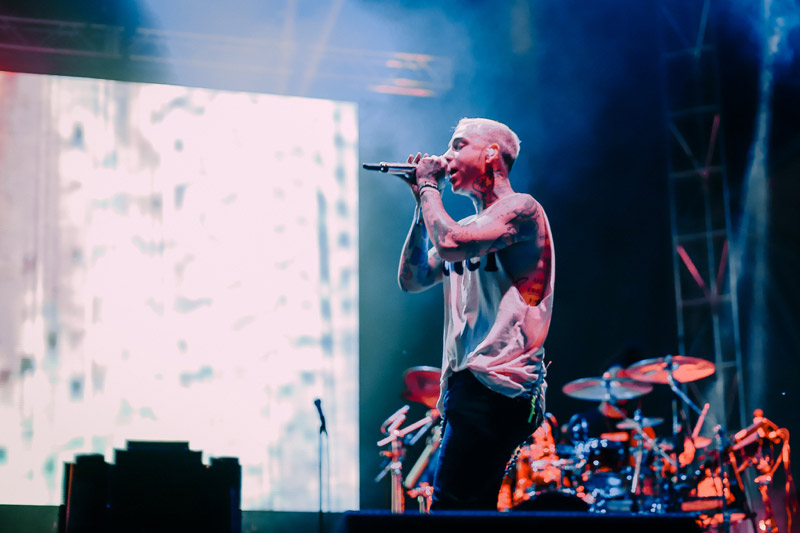 And the real kids were ignoring both and going to blackbear spin & more at Perry’s Tent. 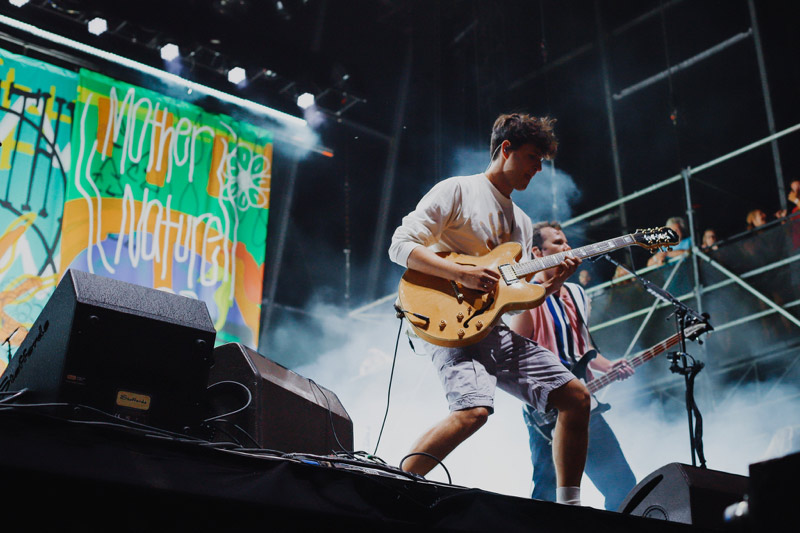 Obviously The Weeknd had the larger crowd, because this isn’t the nineties or even the aughts, and pretty much every time it was rock vs. hip-hop or any other genre at Lollapalooza ’18, rock had the smaller crowd. But Vampire Weekend’s set was arguably more interesting, because while The Weeknd’s was part of summer festival tour (which was supposed to include the weekend prior’s Panorama before it was rained out – QRO recap – and will include San Francisco’s Outside Lands the weekend after – QRO preview), Vampire Weekend were playing their first live shows in four years (indeed their first festival performance since 2014), their first without founding member Rostam Batmanglij, and their first with their new, expanded, live line-up. 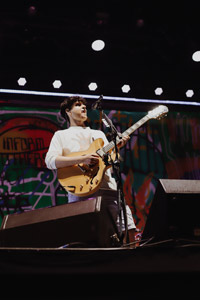 Just in case you weren’t aware it was something new, Vampire Weekend opened by playing “A-Punk” – three times in a row. That would be annoying with a lot of songs from a lot of bands, but that piece’s catch works on repeat. The group played all sorts of old hits, like “Cape Cod Kwassa Kwassa” and “Oxford Comma”, along with more recent material.

And they promised even more recent material was coming, i.e. a fourth album that was already done. However, Vampire Weekend didn’t play anything from the new record, still re-finding their footing and all that, but did hit up covers of Dusty Springfield’s “Son of Preacher Man” and the oh-so-appropriate “Saturday In the Park” by Chicago – not to mention bassist Chris Baio doing the Seinfeld theme song. 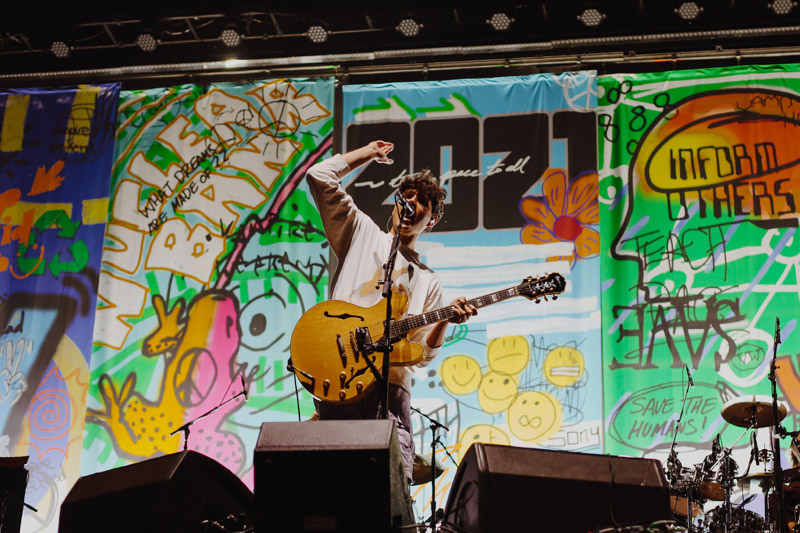