Friday at Lollapalooza '19 went big - including with the guest stars.... 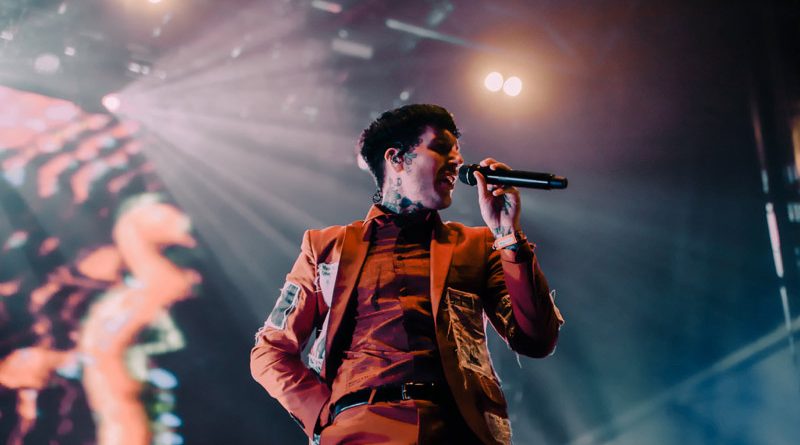 As people revved up towards the weekend, on Lollapalooza Friday there was the viral video of a 100+ kids jumping/knocking down the fence to get into the festival, where the only person stopped was a guy with a prosthetic leg. Yet both the festival and the Chicago P.D. were quick to follow-up by announcing that all of those fence-jumpers/breakers were quickly caught inside the festival. And that one guy who was stopped before? He actually ended up getting in, because ’19 artist Rich the Kid got in touch with him online and gave him an artist pass (Rich the Kid himself actually didn’t perform on Friday, his time slot given to Polo G, but was squeezed into the Saturday line-up). 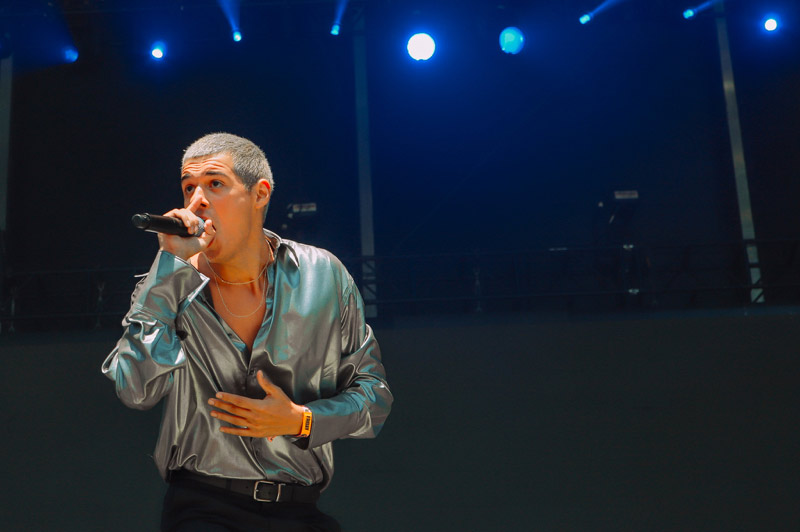 The hot early part of the day at Lollapalooza is when to see the up-and-coming acts, and to see if they’re actually going anywhere. Omar Apollo had a strong crowd for 1:00 PM, when he opened up the second day at the massive Bud Light Stage, as did Boy Pablo right after at Tito’s Stage. The Nude Party have been playing seemingly every festival this summer, and their Cali surf-garage did fit well under the sun at the Lake Shore Stage (bonus points for thanking the techs, “Out all day in the heat, tuning too many guitars.”). 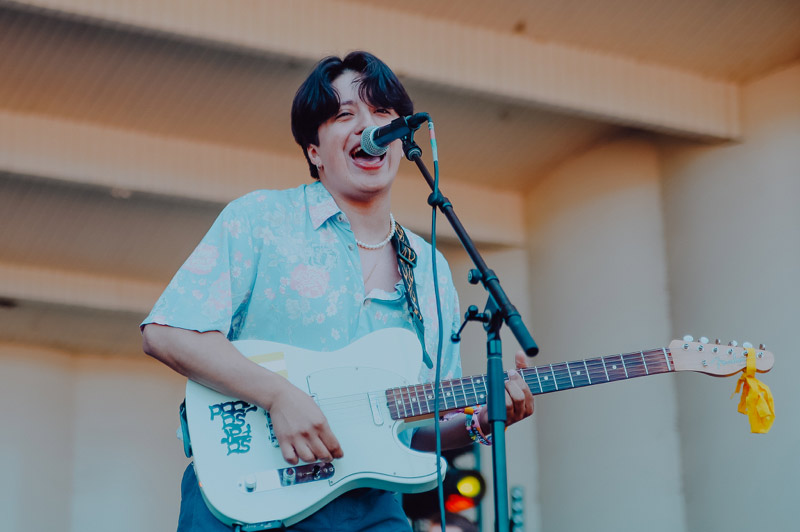 Also just by Lake Michigan, but in the shade on the side of Grant Park, BMI Stage always has at least one act that one figures will return to Lollapalooza to play a bigger stage, like the shiny electro-pop of Against the Current. Right next-door HONNE was doing an acoustic intimate side-session at the Toyota Music Den. A member asked a fan up front who she was psyched to see, she said them, he said, “Not counting us,” so she came back, “No one,” and he laughed and responded, “Right answer, to a trick question.” 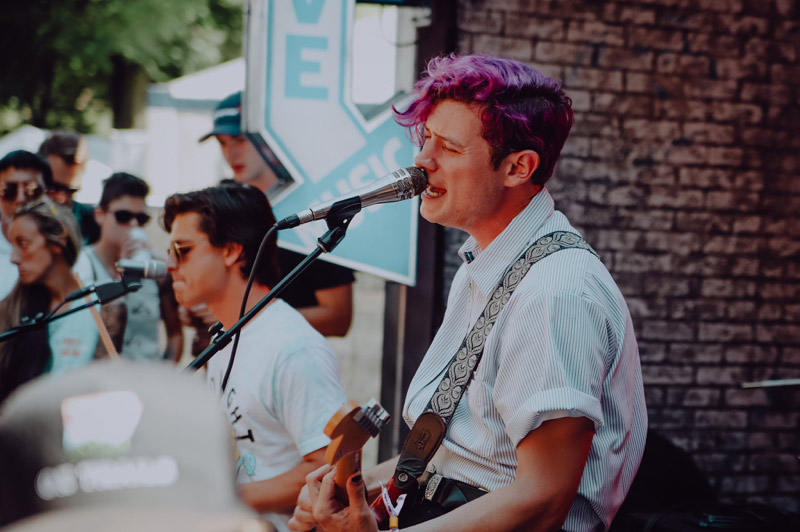 If one wanted to see both competing time slot acts DREAMERS and SHAED early on, or just didn’t get to Lollapalooza in time, or just didn’t want to stand under the sun, both artists played their own intimate side-sessions at the Bud Light Dive Bar. There was a full balcony for both danceable acts, who joked about playing the sponsored side stage – but it was #InternationalBeerDay… 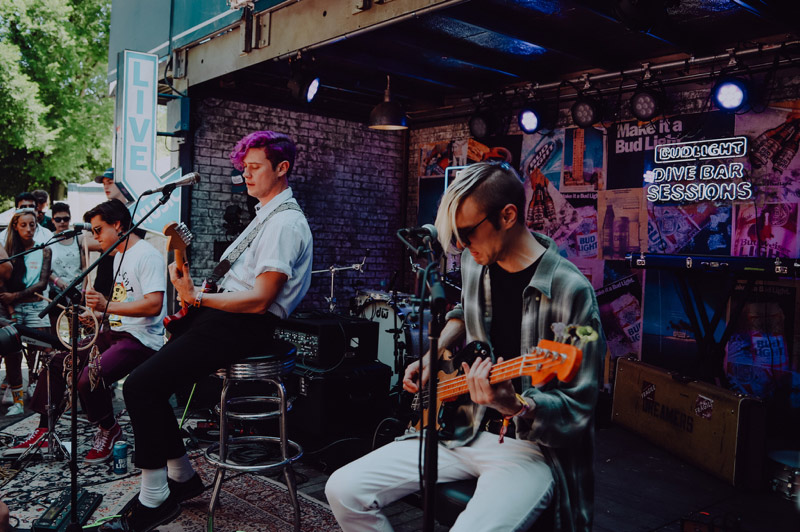 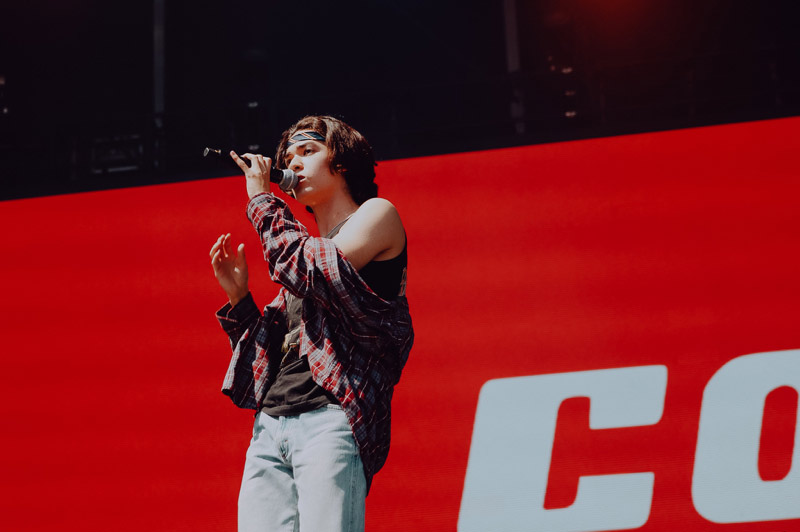 You might not have heard of Conan Gray, an “internet personality” (that’s how he’s listed when one Googles him), but your kid sister or niece, or at least her friend, loves the young man, and so did a lot of young women at the Bud Light Stage. A kind of precocious pop star, his set included his YouTube breakthrough “Idle Town”, about him getting out of his “small town” of Georgetown, TX (population: 70,685, and the seventh fastest growing city in the country). 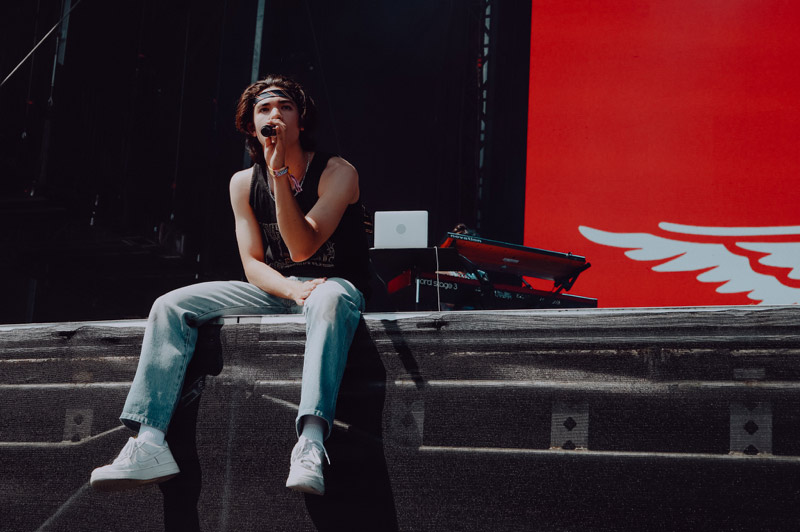 When people complain about Lollapalooza not having the alternative anymore, it’s usually older guys (you can tell because they use the nineties term “alternative”), and they’re not paying attention to all the sad songstresses that the festival books, like Japanese Breakfast at Tito’s Stage. Admittedly, Michelle Zauner did lean into her more sunny indie-pop side at the very sunny stage, but also paid tribute to Chicago by covering local alt-legends Wilco, with “Jesus, Etc.” Meanwhile, Tierra Whack spat rhymes & charmed the American Eagle Stage crowd. 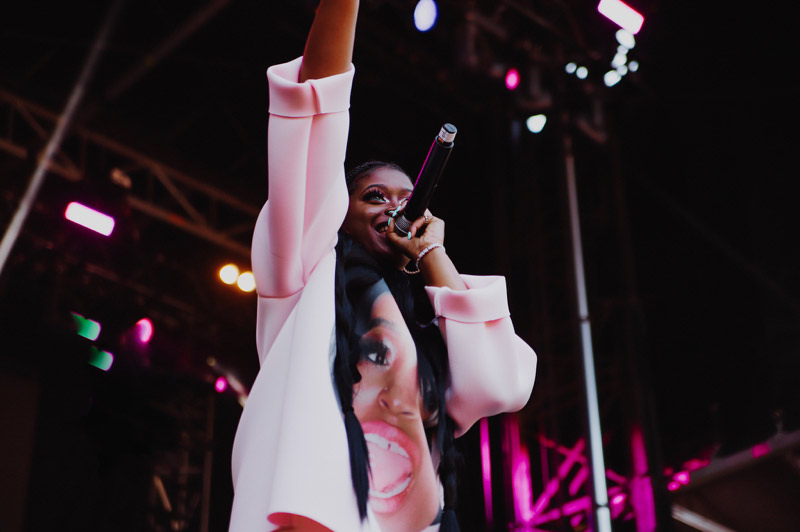 The Bud Light & T-Mobile main stages, at either end of the festival grounds, had some truly odd competing performers on Friday – yet shared a special guest star. First there was Maggie Rogers vs. 21 Savage. Rogers brought really uplifting pop to Bud Light as she played her umpteenth festival this year (QRO photos at a festival two days later), while Savage had exactly the kind of big crowd at T-Mobile that you’d expect for him: wild, who went even more so when Chicago great (and last year’s headliner) Chance the Rapper joined him for “Monster”. 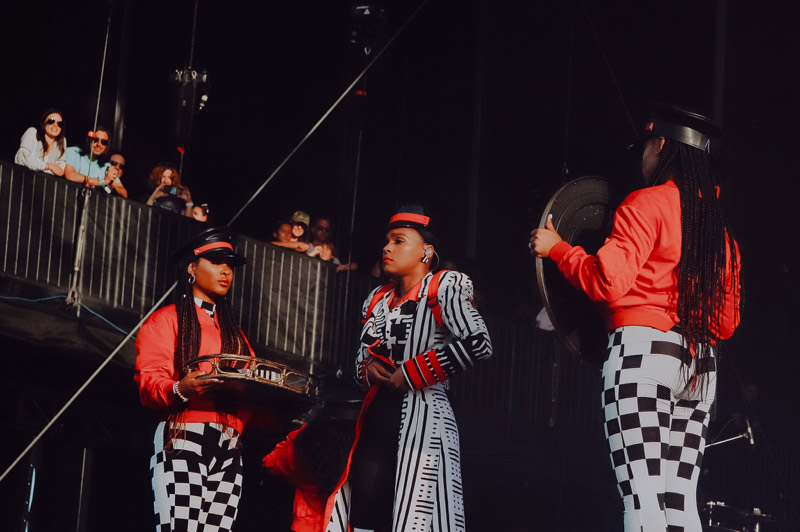 Later on was Death Cab for Cutie vs. Janelle Monáe. Monáe is the kind of performer perfectly suited for Lollapalooza of today, big, energetic pop lady with an incredible stage show at T-Mobile, including so many great dancers. Meanwhile, Death Cab are the kind of successful alt act with a big discography who used to more populate Lollapalooza line-ups, but they still sounded great with their great songs. They did lean more towards their old classics, and weren’t earplug loud like so many ’19 artists, making it the right kind of performance to sit on the grass and watch on the big screen. Indeed, they added the beautiful oldie “I Will Follow You Into the Dark” because a “prominent Chicagoan” had asked them to play it – none other than Chance the Rapper again, who made it over to the Bud Light Stage (imagine the backstage golf cart smuggling him up the festival grounds in secret) to do his “Do You Remember” live for the first time ever (after practicing at the soundcheck to Death Cab’s after-show the night before). Chance just dropped The Big Day, and Death Cab frontman Ben Gibbard sang on the song. The crowd went suitably wild for the hometown hero, and the piece sounded great, but DCFC still closed with their own great, “Soul Meets Body”. 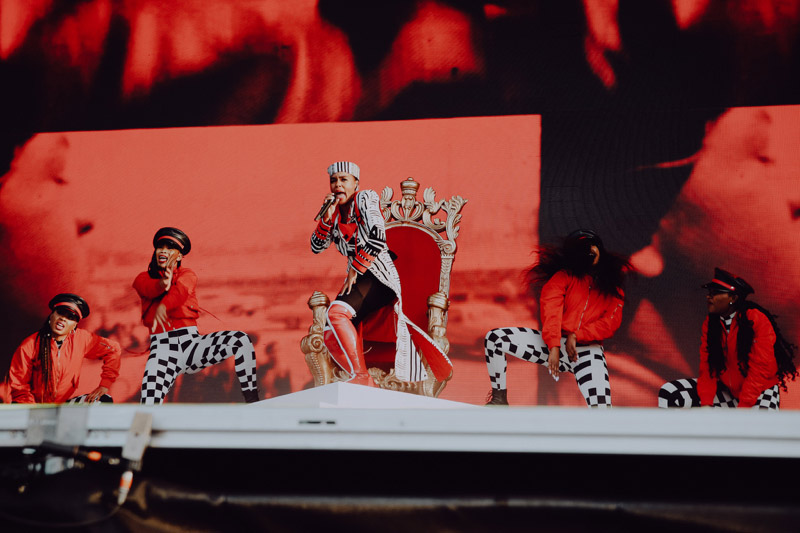 If you didn’t want to deal with the massive main stages and the sun beating down, there was Bishop Briggs at the American Eagle Stage. In her return to Lollapalooza, she brought for full church choir, white robes and all, for “Champion”. 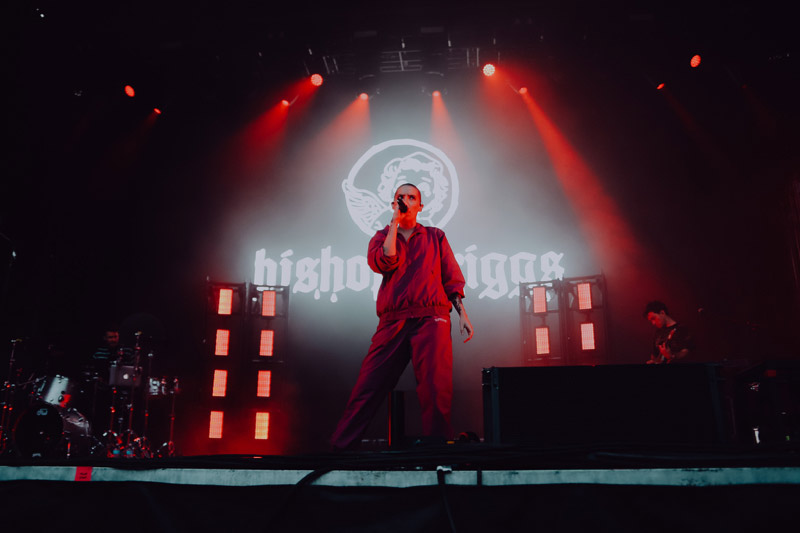 The T-Mobile vs. Bud Light headliner conflict on Day Two was Tame Impala vs. Childish Gambino. Tame Impala are massive Aussie psych-rockers who have had astonishing success, even headlining Coachella earlier this year, and even without their usual confetti cannon at Bud Light, they didn’t shirk in the face of the competition. Frontman Kevin Parker dedicated “Why Won’t You Make Up Your Mind?” to the recently released A$AP Rocky, saying, “Get home safe, dude.” However, it should be noted that Tame Impala have been headlining a slew of festivals this year (QRO photos headlining an early ’19 festival), and haven’t released a new record since 2015’s Currents. If you haven’t seen them recently, by all means do, but they do need to get back to the studio in order to keep their momentum going. 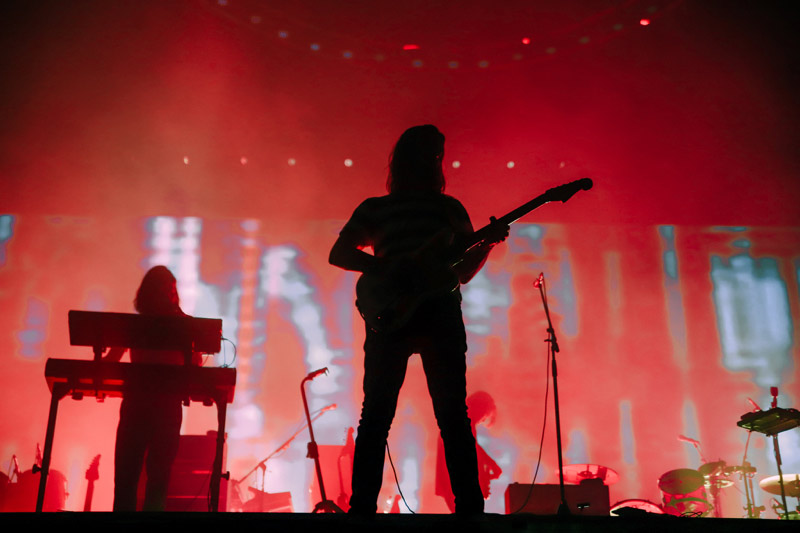 Meanwhile, there was Childish Gambino, a.k.a. actor/rapper Donald Glover. He set out to make his Lollapalooza headlining set at T-Mobile an event, and certainly did so, fireworks included (though if you only heard them, you might have thought they were gunshots, because that’s what people always say, that gunshots sound like fireworks…). Even right after he asked people to put their phones down, he took time out of his set to take selfies with fans up front. And all the photographers were griping because he didn’t allow anyone with real cameras to shoot him, even from the crowd, because Troy from Greendale Community College has gotten a big head since he went to Atlanta and piloted an early Millennium Falcon. 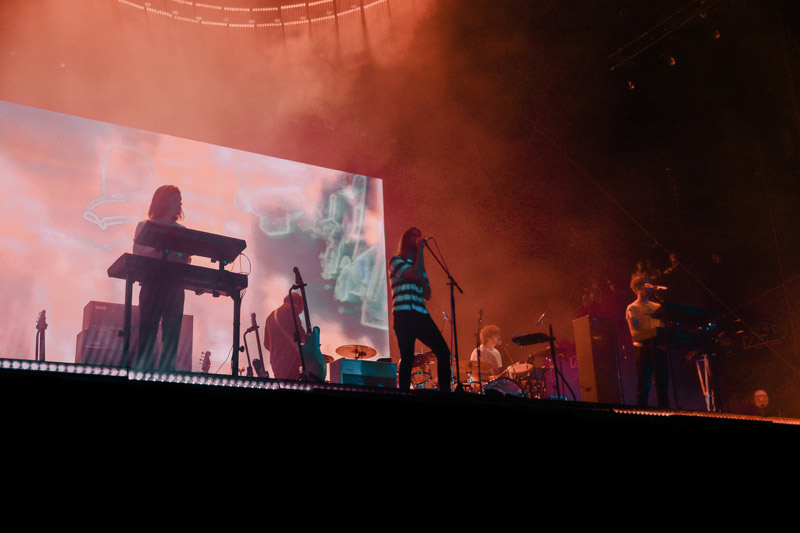 Also, please make note of Bring Me the Horizon going up against both of those at the smaller American Eagle Stage. If you don’t want to endure the massive headliner crowds, that space under the trees is a great alternative, and Horizon likewise didn’t wilt. 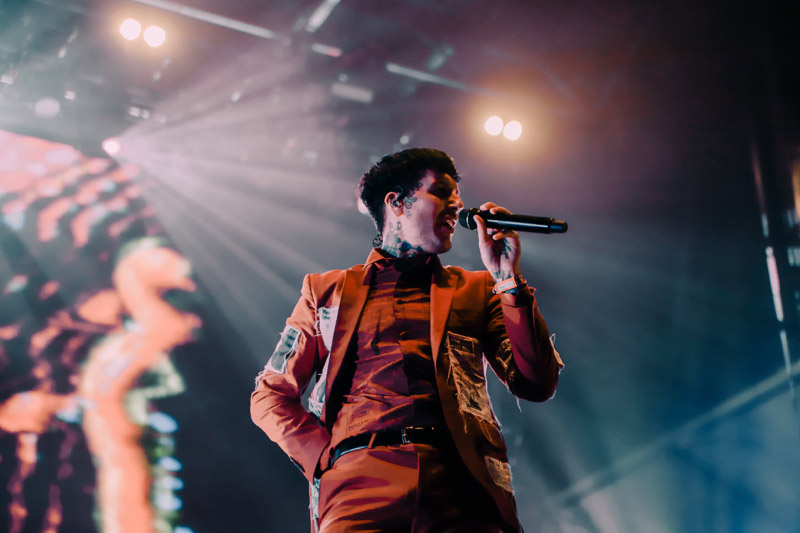