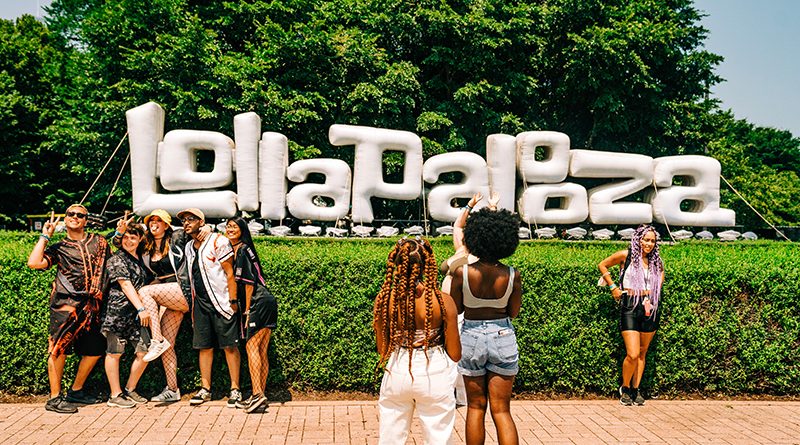 The big news at the start of the final day of Lollapalooza ’21 was that DaBaby was kicked off his headlining slot – finally. After a homophobic & AIDS-phobic rant the prior weekend at Miami’s Rolling Loud, then doubling down with a non-apology and video, it seemed odd that Lollapalooza would keep him. Indeed, when Mayor Lightfoot spoke on Day One, she stated that Chicago & Lollapalooza “Don’t embrace hate” – yet DaBaby was still on the bill at that point. Perhaps she was giving the festival a nudge/shove, or at least covering herself from association with him. And it’s not simple to kick off an act, particularly a headliner, particularly that late. But Lollapalooza eventually did, moving Young Thug up to that headline slot, and adding Chicago’s own G Herbo in Young Thug’s slot.

[editor’s note: The day after Lollapalooza ended, both Governors Ball and Day N Vegas also dropped him from their line-ups. Then DaBaby made more of an actual apology]

[Billboard reports that DaBaby promised a true apology video before his Sunday set, and when it didn’t appear, was canceled]

It’s never easy to hype up the crowd early on the final day of a long festival, but Princess Nokia brought it to the T-Mobile Stage. She had a mosh pit, she crowd-surfed – but noted that, for her to properly surf, fans would have to put down their phones. She rapped about “My little titties and phat belly” on “Tomboy” and more, with a love for all body types, bringing dancers and bubbles.

Late adds have a tough time, but G Herbo showed how to do it at the T-Mobile Stage. Of course, he’s a Chicago local, and had even appeared on the first day thanks to Miley Cyrus (see Thursday). There was real appreciation by the locals, and discovery by visitors.

There are definite times & places one wants to sit at any festival, and usually then one ends far from the music, but not at the forested GrubHub Stage, and mxmtoon was a perfect fit for a shady sit. She brought charming songs about sad subjects like seasonal depression, and even a ukulele for “Feelings Are Fatal”. Meanwhile, Brittany Howard seemed less rocking, more soul-jazz, than her sound with the Alabama Shakes. If it wasn’t as electric as you wanted, she does still have a great voice & presence.

After seeing Sullivan King spin his big sound & effects at the Solana x Perry’s Tent, your correspondent was in the press tent and randomly ran into Chloe Bennet, of Marvel’s Agents of S.H.I.E.L.D. (and recently cast as Blossom in the upcoming live-action Powerpuff Girls). She seemed to be there with some musical act, though was also a pop singer in China before S.H.I.E.L.D. Your correspondent completely flubbed meeting her, after asking her if she was indeed from S.H.I.E.L.D. and she replied jokingly to name his favorite episode, “And I better have been in it,” before adding that she was in every episode.

Your correspondent blanked (the show ran for seven season & 136 episodes…), mumbled something about a scene with Stan Lee – that she wasn’t in. He also mumbled something about fellow star Clark Gregg and if the show is canon (a major topic of debate among MCU fans), with which she replied that it’s not (has probably been asked that a lot). Afterwards, of course, your correspondent thought of lots of good comments he could have made, from praising its longevity (no mere six-episode streamer like today’s Disney+ MCU) to how it evolved outside of the MCU shadow, but there’s a reason he doesn’t write about television & movies…

For the last evening of Lollapalooza ’21, the festival gave the alt-rock kids a chance to shine. Modest Mouse returned to live music on the T-Mobile Stage, behind last month’s The Golden Casket. This was only the band’s second show since everything shut down, so they were a little rusty, but for a large section of indie-rock fans of a certain age, they are the foundational band. Of course, they played breakthrough single “Float On”, but notably not as their closer.

But Band of Horses did close with their own breakthrough, “Funeral”, at the Lake Shore Stage (to a sing-along). Ben Bridwell and co. were in fine spirits, Bridwell joking about going to his first Lollapalooza back in 1993 while in high school in Raleigh-Durham – and current Horses bassist Matt Gentling was playing it (as part of nineties should-have-been-big Archers of Loaf). Bridwell really appreciated the width & breadth of the festival, thanking founder Perry Farrell, as well as noting that Horses had also previously played Lollapalooza Brazil & Lollapalooza Chile. They were definitely having fun, including Bridwell joking that the tambourine he brought out for “The General Specific”.

And closing out Lollapalooza ’21 at the T-Mobile Stage were none other than Foo Fighters. The band has become one of the biggest and most reliable rock acts out there – whether you think they’re reliable great or reliably alright (or even if you still think of them as the ‘other band from Nirvana’s last drummer’…). They’ve risen to be a kind of massively wide-appeal rockers along the previous lines as U2 and Bruce Springsteen, even in today’s less automatically rock-tilted landscape; for instance, they recently post-pandemic reopened New York City’s iconic Madison Square Garden (QRO venue review) & Los Angeles’ The Forum, and have even trolled the likes of the homophobic Westboro Baptist Church & anti-vaxxers. ‘Good for them’ one has to feel, even if you’re not that into them (or more of a Krist Novoselic fan…).

“They only gave us two hours, motherfuckers,” frontman Dave Grohl remarked about playing the longest of any act at Lollapalooza ’21, and their enthusiasm is infectious right now (in all the right ways). From opener “Times Like These” on, they were on, fun-loving rock stars and all. This included putting on their ‘Dee Gees’ alter-ego to cover “You Should Be Dancing” (from their new Bee Gees cover album, Hail Satin), plus covering Queen’s “Somebody To Love”, with Grohl going back to the drums & drummer Taylor Hawkins singing, as well as X’s “Nausea” with vocals from Grohl’s daughter Violet.

[plus, sometimes one must remember that enjoying all that giant stage success is iconic punk rock Germs guitarist Pat Smear, one of the sweetest late career booms in music ever]