Lollapalooza returned big on Day One.... 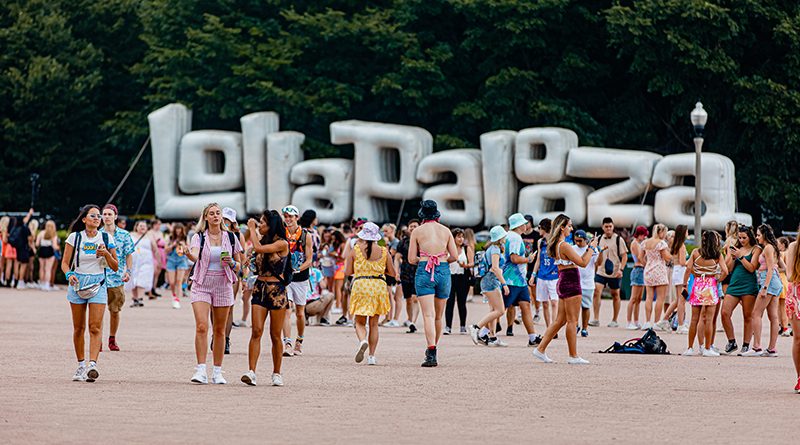 Opening up the massive T-Mobile Main Stage at the start of Lollapalooza was the charming Aly & AJ with their big, country-touched pop. As is often the case with early-in-the-day sets, the crowd got bigger as they went on, particularly loving the sisters’ “Don’t Need Nothing”. MAX on the nearby Lakeshore Stage brought big electro-rock. There’s probably too much of the style, and it has no indie-cred, but the crowd was into it – including MAX’s cover of Outkast’s classic “Ms. Jackson”.

In addition to the bigger stages at both ends of Grant Park, there are the smaller ones in between. Toyota Music Den would have acts doing special second sets, and Migrant Motel brought a healthy audience for the space. Unfortunately, there was not so many people at the next door BMI Stage for Taylor Janzen – the stage should be billed as, “The stage with shade…” (Migrant Motel played it later)

Then there’s Perry’s Tent – or rather “Solana x Perry’s”, as the cryptocurrency blockchain got added on as a sponsor at the last minute. That “Perry” is Perry Farrell, singer of Jane’s Addiction and founder of Lollapalooza, who bought the festival back and brought it back. Rumor is the music veteran isn’t actually that much of a fan of the EDM that’s spun at ‘his’ tent, but DJs like Justin Jay are very popular with the kids.

One thing Lollapalooza is good for is seeing artists you’ve been hearing a lot about, and seeing if they’re worth all that hype. Orville Peck has gotten notice just for his outfit, as he always wears a cowboy hat and fringe mask, even before the pandemic, even during press tent interviews (but Clinic did the mask thing first…). He delivered deep-voiced country at the T-Mobile Stage, perhaps gothic-country – or mock-country. He covered “Born This Way” at Lady Gaga’s request, doing it as epic country.

It’s also great at Lollapalooza to see artists have excited crowds that you didn’t know they drew. LP brought grandeur to the Tito’s Handmade Vodka Stage, but also fun. And there was big reaction online to QRO’s grainy from-the-crowd photo of them, including from the likes of Mexico & Italy, showing that LP has grown from making hits for others (even singing on Cracker’s hidden track “Cinderella”) to star. Meanwhile, Flo Milli was able to own the smaller GrubHub Stage without the usual back-up dancers used to hype a crowd, and brought such a big audience of her “bad bitches” that security cleared out the photo pit after the first song.

Admittedly, Lollapalooza ’21 could make you feel old, and not just in a, ‘Your father let you out of the house dressed like that?!?’ way (though, that too – Matt Gaetz would love it…). Something for Gens A-to-Y were Black Pumas, smooth sounds and engaging on the T-Mobile Stage, like closing with their Target commercial-level hit “Colors”. But it was the college kids who recommended Kim Petras at the Lake Shore Stage, with her own great engagement, including killer back-up dancers.

Usually, the press tent at any festival is not what civilians imagine it to be, as the artists have their own Artist’s Village (that press have to walk past and wish for as they head to steerage class Press Lounge), but occasionally you get great sights (and there is a happy hour). Thursday saw the surprise appearance of the iconic Billy Idol – and him meeting the legendary Steve Aoki! It was completely by chance, the two appearing on different closing stages (see below), but the two filled every photographer there’s wishes and chatted for a few moments, to many photos of their completely different hairstyles.

Aoki was there because he was headlining Day One of the Solana x Perry’s Tent, playing after Tchami. EDM DJs at festivals are still just mostly a guy behind a very raised table, but they will bring extras, especially this year. Tchami had some nicely timed smoke machine. Aoki brought out the likes of Sydney Sierota from Echosmith at his start, with other special guests such as Alex Gaskarth (All Time Low) and Darren Criss (Glee). And Aoki is just such an enthusiast for music, grin as big as his hair is long, that it’s infectious.

But the undisputed headliner of Thursday was Miley Cyrus. When it was announced that she was playing Lollapalooza, it did signify how mainstream this year was going to be, but she turned out to actually be the one to bring back some of the old alt-rock of the past. Cyrus has been busy mastering cover after classic cover, not just one or two but entering into Replacements/Yo La Tengo also-an-amazing-cover-band territory (helped, of course, by having a highly skilled backing band). She brought on said Billy Idol for not just his “White Wedding” but also their collaborative “Night Crawling” from her Plastic Hearts (other guests this evening included Wiz Khalifa, Chicago’s own G Herbo and even Bulls mascot Benny the Bull…). She had the kids screaming for Blondie’s “Heart of Glass”. She even played Pixies’ “Where Is My Mind?”, plus Temple of the Dog’s “Say Hello To Heaven”, like old school Lolla! Cyrus also didn’t shrink from her own catalogue, mashing up her famed “Wrecking Ball” – with Prince’s “Nothing Compares 2 U” (also known for Sinead O’Connor’s cover of it).

Like other massive pop stars such as Kanye West and Taylor Swift, it’s easy to be snooty and look down on Cyrus – hell, she rose to fame as Disney star Hannah Montana! But more & more even the hipsters have been learning to love the big stars, whether it’s Swift working with Aaron Dessner of The National, or us all getting behind #FreeBritney (who Cyrus voiced her support for on this stage). And Cyrus has been able to do it her own way, no borrowed cred or deserved sympathy.

So, yeah, Miley Cyrus headlined Lollapalooza – and was quite good.

-photos courtesy of Lollapalooza, except BMI Stage photos from BMI, and your correspondent’s photos of Steve Aoki & Billy Idol from his iPhone