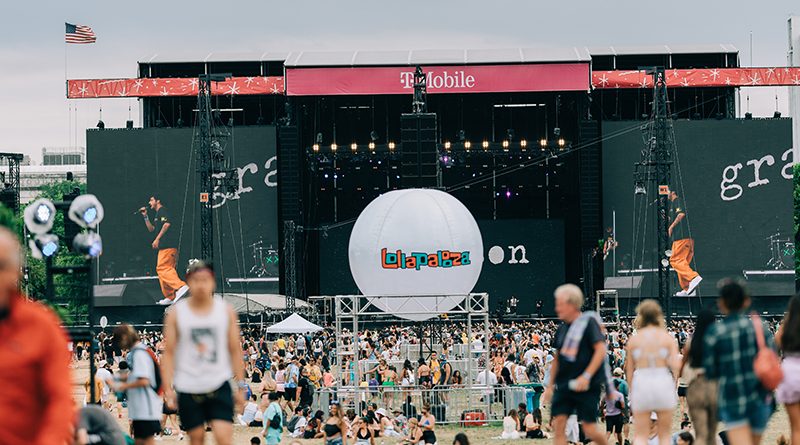 All festivals have last minute schedule changes, artists dropping off & jumping on, but there were more than usual at Lollapalooza ’21 – though rather understandable, given the circumstances. Indeed, it was more surprising how stable the line-up was – and that the biggest change had nothing to do with COVID (see Sunday).

It’s tough to be one of those last-minute, early-in-the-day acts filling in, as nobody bough their 2021 Lollapalooza tickets to see a late-add like Monophonics at the Lake Shore Stage, but their big soul, horns included, is easy to enjoy. On the other hand, there was a big turnout for a special acoustic set by Tate McRae to start the Toyota Music Den that day, but she is charming.

If the feeling is that rock has been eclipsed at Lollapalooza ’21, then its back-in-the-nineties foundational indie-rock definitely has decreased – but is not gone. It was great to see the likes of Porches at Tito’s Handmade Vodka Stage, who were such a throwback they covered Nirvana’s “On a Plain” (hopefully the kids knew the original). Meanwhile, Michigander had more relaxed, but also energetic, indie-rock at the GrubHub Stage, including a song written in high school, “When I could only dream of playing Lollapalooza, and look where I am now…” (ironically, this crowd had more gray in their hair than most at Grant Park this year)

Every music festival deals with female underrepresentation, and Lollapalooza has probably done better than most, and not just with Miley-sized headliners. Even the notoriously male-heavy (leaning on toxic male-heavy) EDM field is getting more XX, like VNSSA bringing the good vibes to the Solana x Perry’s Tent. At the small & shady BMI Stage, Joy Oladokun did everything from folk to covering “Smell’s Like Teen Spirit” (yes, another Nirvana cover – at least a different song), not to mention speaking out against police violence, and for personal acceptance.

There are also still some nice finds, and some judge-if-up-to-the-hype in indie at Lollapalooza ’21. Salt Lake City’s The Backseat Lovers brought a nice touch of wistfulness, even country, to their emo-indie at the T-Mobile Stage, the twenty-year-olds taking style cues from Almost Famous’ Stillwater. Already discovered was Mt. Joy at Tito’s Handmade Vodka Stage, with a massive, difficult-to-navigate crowd for their smoother alt-country, filled with spaces you’re not allowed to stand and kids navigating the bodies by holding hands and creating a chain (that messes with everyone else).

That ‘judging the hype’ only increases at the day goes on at Lollapalooza, as growing stars play the middle-of-the-line-up slots to big crowds. Cautious Clay delivered at the Lake Shore Stage, with smooth sounds and a full band. On the other hand, Trippie Redd just had his DJ and his album at the Bud Light Seltzer Stage. Much like Polo G the day before (see Friday), it wasn’t even an instrumental track devoid of vocals for Redd to rap over, but instead he just yelled over his own recorded voice.

Young the Giant used to be a too little nice a listen, enjoyable yet not gripping enough, particularly live at a festival like this, but they have grown a harder edge when they want to, like “Something To Believe In”. And they haven’t forgotten about their breakthrough self-titled debut (QRO livestream review of Young the Giant), including starting at the T-Mobile Stage with “Your Apartment”, and playing original breakthrough single “Cough Syrup” – not at the end, but still dedicated to “old fans.” They even covered Nelly’s “Hot In Here”.

“Fuck COVID! I’ll get to ‘Fuck the Police!’ later…” Thus, entered Freddie Gibbs onto the Lake Shore Stage. His DJ played some classic tracks to hype up the crowd, like “Just a Friend” from the late Biz Markie (right after you’d finally gotten it unstuck from your head…) – which did mean that Gibbs himself came out ten minutes after his scheduled start time, a common issue with rappers at festivals. But the crowd was hyped, chanting “Freddie!” at the start.

Lollapalooza does know how to get some hype for itself, pulling off a special intimate appearance by chart-topper Machine Gun Kelly at the tiny Bud Light Seltzer Sessions. Announced only an hour before, the crowd was probably twenty times what the beer tent was supposed to hold, spilling out to see Kelly closer than you probably ever could. And yes, his new girlfriend/old pin-up Megan Fox was there at the side, to witness Kelly climb the space’s rafters to close.

And then there was Limp Bizkit. When the nineties rap-rockers were announced as part of the Lollapalooza ’21 line-up, those who didn’t say, “Who?”, said, “Why?” Admittedly, the band’s once-notoriety has been revived in recent weeks by the Woodstock ’99 documentary, and the part they played in that debacle. For some reason, they decided the return this year, and Lollapalooza was their coming-back party (which makes a certain degree of nineties sense – and you know they like the said product of their Bud Light Seltzer Stage).

The day before, singer Fred Durst, maybe one of the most hated men of the alt-nineties, wiped his social media and posted a new pic with grey hair, and that was what he leaned into. He came out “Grampa style,” and announced he has a new album titled, “Dad Vibes,” t-shirts included. He joked around, particularly noting that Bizkit was playing the same time as Megan Thee Stallion (see below), and how the crowd should go see her (and he might too). After the last song, guitarist Wes Borland threw his guitar into the crowd, with a near ‘death match’ ensuing. Of course, it was destroyed, to chants of the band’s line (once again notorious thanks to Woodstock ’99), “Give me something to break!”

One thing Durst was right about was that you should really see Megan Thee Stallion. When what festivals that are happening this year, and Thee Megan was on a lot of line-ups, it was noted that she seemingly was never listed as headliner. Well, she should from here-on-out, judging from the massive crowd she had at the T-Mobile Stage (at least she was put on the biggest stage). And she was in full form with her “hot girls” (both female fans & her own gravity-defying dancers), including calling out those who like girls, those who like boys, and those who like both. Even in today’s era of sex-positivity, there might not be anyone who does it as well as her (yes, she did “W.A.P.”).

While others seemed more random on the Lollapalooza ’21 line-up (see above & below), it was a particularly odd slot when Angels & Airwaves played the Lake Shore Stage. That was between Megan & Post Malone (see below) on the nearby T-Mobile Stage, and the band is the outfit of Tom DeLonge, formerly of Blink-182, now best known for being a UFO hunter (he fronted the group that got the recent government UFO files declassified). And they can rock – plus will not “Surrender”.

Solana x Perry’s Tent had a giant rig set up in the evening, which loomed over Oliver Heldens, even when he ended with a remix of the Tetris theme song. It was presumably there for stage headliner Slander, who did bring his fullest stage show (for a guy behind a table). There was also iann dior at the GrubHub Stage, and his electro-pop – or maybe it was rap?

Rivaling Limp Bizkit for ‘random act playing Lollapalooza ‘21’ was Journey, the seventies rockers following the nineties rockers at the Bud Light Seltzer Stage. But it’s really not a massive festival if there isn’t one truly legacy act, someone from back in the day who are still delivering. Journey was revitalized by new singer Arnel Pineda, and he/they have kept at it since 2007, giving them a new energy. And you know they put on a show – plus played almost the longest of any artist at Lollapalooza ’21, because they’ve got that kind of catalogue, such as “Separate Ways (Worlds Apart)”, “Don’t Stop Believin’”, Open Arms” and more. And bonus points to the active sign language interpreters, as this was kind of what they were made for.

The EDM DJs might have had their own special lighting rig, but Post Malone brought his own full scaffolding rig to T-Mobile Stage – even starting his headlining set from it. The rapper admitted he was rusty, but aren’t we all (he also got in a plug for his own Posty Fest in Dallas over Halloween). Of course, he had fireworks, and for “Tommy Lee” brought on that song’s guest star Tyla Yaweh. Thankfully, the megastar has a bit of humor about himself, as when he played “Stay” on acoustic guitar, told the crowd it would be the most boring part of the set, and they could take a bathroom break then if they wanted.

-photos courtesy of Lollapalooza, except BMI Stage photos from BMI