Thank God it was Friday at Lollapalooza.... 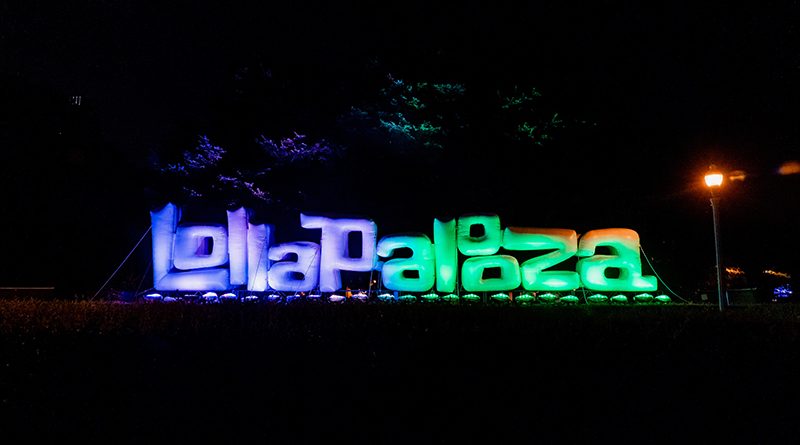 Before heading to Lollapalooza for the day, your correspondent stopped off at a listening party for Abstract Mindstate. The rap duo were big in Chicago in the late nineties/early aughts, but never broke through, so broke up – until now, thanks to none other than Kanye West. The Chicago superstar got Olskool Ice-Gre and E.P. da Hellcat to get back together, producing their reunion record, Dreams Still Inspire (out August 6th). There’s also a documentary on the band coming up, We Paid Let Us In! (QRO documentary trailer review).

While there weren’t a ton of people at the event (no chance of seeing Mr. West, as we all know he’s living in Atlanta’s Mercedes-Benz Stadium – of course it would be the Mercedes-Benz Stadium – working on finishing his Donda, which should come out the same day as Dreams), it was great to go to a Lollapalooza-adjacent event in a year seemingly without any (outside of official after-shows) – and yes, there were free drinks and free Chicago deep-dish.

Abstract Mindstate were there, greeting visitors (including press) and detailing the record. They talked about “flexing” their wordsmithing on “Expository Mode”, “Move Your Body” about the person you’re not into, and more. They described how West really produced, not just providing beats, such as suggesting guest singer Jonquia Rose open “Salutations”, overruling on “Social Media”, and bringing in his cousin/back-up singer Tony Williams for “Body”.

The pair also talked about inventing a new genre, “Adult Contemporary Hip-Hop”, or “ACHH”, that brings in more soul than say, trap. And that it’s not just for the old rappers like them, but even youngsters such as Joey Bada$$.

There’s definite commentary that rock is seemingly missing from Lollapalooza 2021, albeit mostly comments from aged rockers who’d only be there if they were chaperoning their kids. Yet you could find some head-banging at Grant Park, such as Black Pistol Fire at Tito’s Handmade Vodka Stage, who had the crowd at the end shouting “One! More! Song!” Jawny put on some funkier rock at the GrubHub Stage, including covering The Killers’ “When You Were Young”, because The Killers are veteran rockers at this point (they did headline Lollapalooza ‘17 – QRO recap). And on the T-Mobile Stage Grandson declared, “Rock’s back, baby!” Well, electro-heavy rock, but the singer demanded, “I wanna see more crowd-surfing, more people on people’s shoulders, cause it’s been too long…”

But rap and R&B were on an equal footing with the ol’ guitars. Mick Jenkins was self-confident but also engaging at the Bud Light Seltzer Stage, asking people, “2020 sucked – hands up if you know 2021 will be better, but not that better…” Rising phenom Giveon had a long intro and big entrance to squealing teen girls that knew his smooth & seductive sounds. Yet there was also Polo G with just his DJ and recording on the Bud Light Seltzer Stage. He just rapped over it, not even an instrumental track, but rapped over the recording of him rapping, for an underwhelming appearance that also started late and ended early.

Meanwhile, the EDM kids had Solana x Perry’s Tent – and it was for the kids. Even for Lollapalooza, even for Lollapalooza ’21, that stage drew the half-naked teens for record-spinners such as Riot Ten, Subtronics, and Jauz. How the artists did depend on how much you like raving, but there were those who did it all better, such as Subtronics calling upon his “Cyclops Army” in his big sci-fi intro, or Jauz bringing a well-fitting blend of other young-appeal stages (albeit playing other people’s songs).

And as the day went on, the crowds got wilder – as did the artists. White Reaper was doing their first show since COVID, bringing the kick-ass rock of The World’s Best American Band (QRO review) & more to the Lake Shore Stage that “Might Be Right”. The young people at T-Mobile Stage for Roddy Ricch were going absolutely nuts, and knew all his songs. There’s nothing quite like seeing teen girls in tube-tops & short-shorts rapping along…

One issue with Friday was the weather – not that it was too hot, as we’d all feared in this summer of wildfires and ‘heat domes’, but that it was too cold, even threatening to rain. But a light drizzle didn’t damper the excited audience for Jack Harlow at the Lake Shore Stage, who shouted, “Daddy!” repeatedly when they waited for him to appear. He joked that security didn’t want him to jump into the pit, but he still did.

Some might have been surprised that Tyler, the Creator had moved up to headlining Lollapalooza, after playing it much earlier in the day just back in ‘18 (QRO photos). But he’s evolved in sound, style, and success, bringing a massive show to the T-Mobile Stage, complete with wilderness backdrop and numerous costume changes. He was in Chicago behind last month’s Call Me If You Get Lost, his first solo album in a decade, and has become a big-name artist. “They told me I was too weird, too niche, it was shock value and I’d last six months. But here I am headlining Lollapalooza now!”

-photos courtesy of Lollapalooza, except your correspondent’s photos of Abstract Mindstate from his iPhone