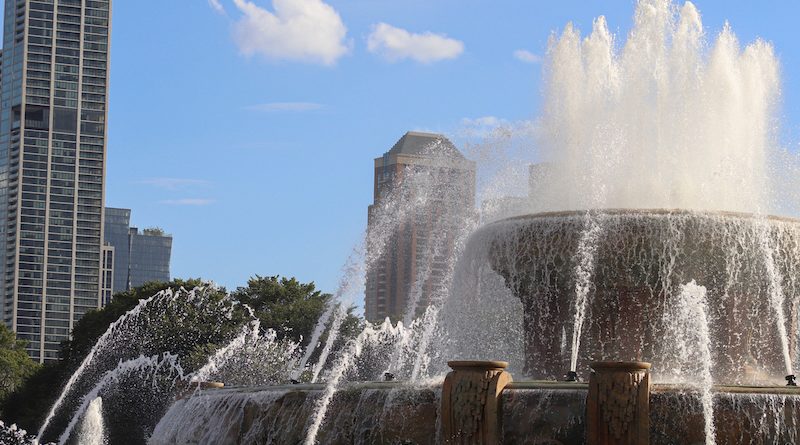 Lollapalooza is a chance to catch acts that you’ve been hearing about, to see if they live up to the hype – even if they don’t. Admittedly, you & most everyone else in the Bud Light Seltzer Stage crowd at DJO were there because the band is fronted by Joe Keery, a.k.a. Steve Harrington of Stranger Things (as opposed to Things guitar-playing Eddie Munson, a.k.a. Joseph Quinn, who was backstage with Metallica on Day One). Keery does have some indie credentials, having been part of Post Animal until he had to leave when his acting career took off, and has stayed in the musical game with his own DJO. But the music was kind of psych-lite, not as notable as Keery the actor or even his not-Steve hair. Similarly, Goth Babe on the Coinbase Stage was another hyped, unimpressive act.

Living up to their hype was Italy’s Måneskin, the 2021 Eurovision Song Contest winner on the T-Mobile Stage. Usually those Eurovision acts are flashes in the pan, who never make it across the pond (give or take an ABBA), but the big hair & big glam rock of Måneskin has wide appeal, and the group has the right level of not taking themselves too seriously. Props given to singer Damiano David for giving props to the Active Sign Language interpreter (unsung stars of every Lollapalooza), the girl up front crying & singing along, and the nation of Ukraine (this year’s Eurovision winner). Guitarist Thomas Raggi went into the crowd, while bassist Victoria De Angelis wore pasties, because this was a party (you know drummer Ethan Torchio would have done his part if he wasn’t stuck behind that kit, but such is the way of the drummer…). Also having fun was Beach Bunny following on the Coinbase Stage, celebrating their great new album Emotional Creature (QRO review), with catchy & fun indie-rock, thanking their family, and asking for fans on shoulders.

Meanwhile, the Discord Stage had some special acts. Claire Rosinkranz had her viral hit “Backyard Boy” for all her fans. And despite losing his voice the night before, KennyHoopla hooped it up at the Discord Stage, with a full band – and a full mosh pit for “Hollywood Sucks”. And later on, Dominic Fike drew perhaps the stage’s biggest crowd over all four days, with songs of off Don’t Forget About Me Demos and even some more somber What Could Possibly Go Wrong tracks.

Despite its historic roots going back to the alt-nineties (or maybe because of them), Lollapalooza has never been a fest for reunions. Pixies might have started the twenty-first century alt-reunion trend at Coachella, and Chicago’s own Riot Fest might specialize in them, but Lolla has preferred the of-the-now & long-running acts. But it’s also still Perry Farrell’s festival, and for ’22 he brought about a reunion – not of his still-active Jane’s Addiction (see them on tour in the fall with The Smashing Pumpkins), but of his post-Jane’s nineties act Porno for Pyros at the T-Mobile Stage. Yes, sort of a random reunion (like Paul McCartney reuniting Wings, or Billy Corgan, Zwan), but that made it special – and they did have a notable MTV hit back when MTV still had alt-music hits (and still had music), “Pets”, which even Beavis & Butthead loved (another nineties reunion that just came back, heh-heh). It was clear that Farrell & co. (including wife Etty) were enjoying being back up on stage, he still a consummate frontman. Pumpkins’ own Billy Corgan joined them for a cover of “When the Levee Breaks” – Farrell had joined Corgan the night before Lollapalooza at a benefit for Corgan’s native Highland Park and the survivors of the July 4th attack there.

As Lollapalooza ’22 came closer to its end, there was still time for one more big dance number, thanks to BANKS on the Coinbase Stage. Admittedly, it was not the best timing for her, still in the summer sun, and between two nineties guitar guy acts on the T-Mobile Stage (if she’d played before Dua Lipa…), but the artist gave it her all, and you better believe she had a great dance crew. Meanwhile, though The Kid Laroi is best known for his work with others, such as Justin Bieber and the late Juice Wrld, he and his emo-rap stood on his own at the Bud Light Stage.

Even with the biggest veteran acts, there’s a question whether they’ll play with the kids at Lollapalooza. Green Day is as old as the festival, going back to the alt-nineties, yet Billy Joe Armstrong, Mike Dirnt, and Tré Cool have managed to not only stay together, but stay big, even stay kinda relevant. They found another connection with the youth in the aughts with their opposition to the Iraq War, and only last summer played ballparks on their ‘Hella Mega Tour’ (QRO live review). Indeed, just on Friday night of Lollapalooza, they played a special intimate after-show at The Metro that everyone was talking about, where they pulled out rarities.

Armstrong wore a Metro t-shirt as the band played big to close out Lollapalooza ’22. Yes, it was a big, fun show – including fireworks. Even the cops sent to patrol the festival were into it. Armstrong did great intros for everyone on stage, including their long-running tour guitarist Jason White and very own rock saxophonist Jason Freese (a resurgent job these days). He even asked for a fan, Abby, to come up and play guitar on their version of “Knowledge” by their Bay Area classic forerunner punks Operation Ivy – and then let Abby keep the guitar! They also covered the ultra-classic “Shout”, got fans & themselves to get down as it got “a little softer now” (band members literally lying down on stage at one point).

Okay, maybe they didn’t play anything later than 2009’s 21st Century Breakdown (QRO review), and you were having your most fun when they played off of 1994’s Dookie, but it was still a great, enjoyable, big finish to Lollapalooza ’22.

Of course, to certain folks, Lollapalooza ’22 ended, indeed even began, with J-Hope at the Bud Light Seltzer Stage. Singer from a little ol’ band called BTS, now that the globe-conquering K-Pop boy band phenomena has gone on hiatus, this was J-Hope’s chance to shine on his own. There were members of the fan BTS Army camping out for him from the start of the day (even before), to witness him make history as the first South Korean to headline a major U.S. music festival.

It would be easy to look at his booking as a simple lay-up for Lollapalooza, but it was still a big deal (and came in late), stretching where even the likes of Coachella or Bonnaroo haven’t. And J-Hope did deliver for his fans, whether with his newer, darker, even harder singles “More” and “Arson” from his new concept album Jack In the Box, or reliable BTS pieces such as “P.O.P (Piece of Peace), Pt. 1” or “Dynamite”. J-Hope admitted that many people there were seeing him for the first time, and certainly made his impressive stage presence known.