Lollapalooza '22 went big on Thursday, with a massive-with-a-capital-M headliner & much more.... 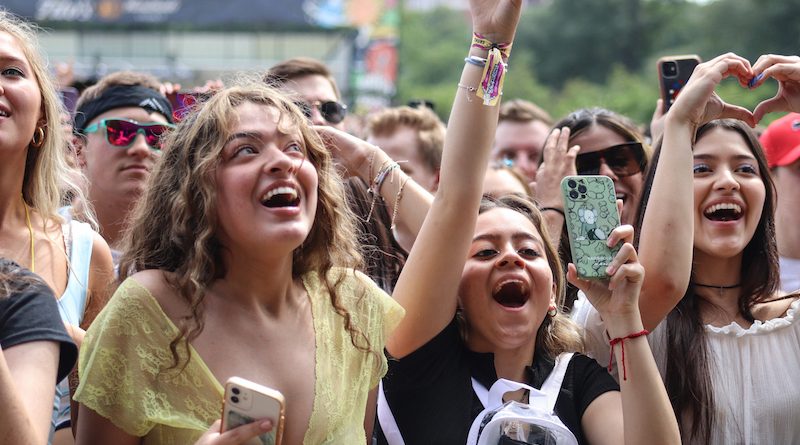 Ever since expanding to four days in 2016 (QRO recap), the additional Lollapalooza Thursday has long felt a little lighter, less big than the rest of the (very big) festival, with fewer one-day ticket-buyers, even some with full fest ticket-holders skipping the first day, and the headliner not quite so massive. Not so for 2022. Yes, the primary reason was the massive-with-a-capital-M headliner, but was true for the whole day. Yet Thursday also didn’t lose that ‘first day looseness.’

Take Sampa the Great on the Coinbase Stage. Coming on at 1:30 PM under the midday sun, they didn’t wilt – of course, perhaps it didn’t feel quite so hot & sunny for the first-ever Zambian act to play Lollapalooza (and Coachella, and Glastonbury), the family band that included siblings & a cousin (“We’re doing the Jackson 5 thing!”). Frontwoman Sampa was quite charming & energetic, both just what you wanted from some act you’d never heard of that early on the first day, and just what you’d want to do as an act few had heard of that early on the first day. On the flip side from the breaking-new-ground was Ireland’s Inhaler, going over ground at the Bud Light Seltzer Stage once trod by their forefathers – in this case, literal father, as Inhaler frontman Elijah Hewson is the son of none other than Bono.

While the alt-rock has long since declined from being Lollapalooza’s focus these days (it ain’t the nineties anymore…), it still has its place at the festival in ’22. Case in point was the Coinbase/T-Mobile Stage back-to-back of The Wombats and Manchester Orchestra. Neither are twentieth century holdovers, nor brand-new acts, both having played the festival before (QRO photos of The Wombats at ’18 Lollapalooza – QRO photos of Manchester Orchestra at ’14 Lollapalooza), yet have a wide enough alt-appeal to return, the right level of indie/mainstream for the festival. For The Wombats, it’s their rock/electro mix, from this year’s Fix Yourself, Not the World (QRO review) to old chestnuts like “Techno Fan”. For Manchester Orchestra, it’s their alt/hard balance from last year’s The Million Masks of God (QRO review) to emotional oldies such as “I Can Barely Breathe”.

The other side of Grant Park tilted more towards the young folks and their hyperactivity. There was Role Model beneath Tito’s Bandshell, while the beautiful Tove Lo has been wowing crowds for a few years now, and the Swede didn’t tone it down on the Bud Light Stage for Middle America with sexy songs such as “Talking Body” and “How Long” (and flashing her crowd). Meanwhile, 100 gecs brought their unique brand of so-of-the-moment-don’t-even-try-to-decipher-it hyper-pop to Tito’s, purple & yellow wizard costumes included.

The best-kept secret of Lollapalooza has long been the BMI Stage, and not just because it’s all in the shade. The hidden-by-those-shady-trees stage hosts up-and-coming acts, obviously some you might never heard from again, but also those who will be playing the big stages next time they come to Lollapalooza. For instance, there was Jesse Jo Stark, who came out to chants of “Jesse! Jesse!” like she was a headliner, with pieces such as “So Bad” and “Modern Love” from her upcoming album (word is that the goddaughter of Cher even had Lenny Kravitz watching from side stage).

There are always some slightly random acts at any Lollapalooza, one you might think don’t fit on any day, but are getting notice and know how to play. This year had the rising jam star Billy Strings on the big T-Mobile Stage, who himself seemed a little shocked. And he let the crowd know, “We’re gonna play some bluegrass for you,” just in case anyone was wondering. Meanwhile, the younger & more of-the-brand Remi Wolf played the smaller, shadier Discord Stage with “Sexy Villain” and “Disco Man”.

There are also quite a few acts at any Lollapalooza who have played many festivals that summer, who might feel a little over-exposed, but up there you can see why they’re recruited so much, such as this year with Ashnikko on the Coinbase Stage. Just her & a DJ, she had impressive stage command (aided by her latest great outfit), and a great conversational feel for the crowd – before she covered Avril Lavigne’s classic “Sk8er Boi”, she prefaced by admitting that every skater boy she’s ever been with has been “subpar in bed…”

But let’s face it: any day at a festival where Metallica headlines, the day is about Metallica. It’s easy to forget how amazingly successful they’ve been, and not as some sixties/seventies classic rock act, but as the very definition of “heavy metal.” Yes, they’ve had their misses (singer/guitarist James Hetfield asked the crowd to give 2003’s much-maligned St. Anger another try, because they’re so successful they’ve even got their go-to lemon – but what about Lulu (QRO review)?…), but they’re just such a reliable juggernaut in a world where so little big is reliable, let alone a rock act.

Indeed, there is a certain class of reliable festival headliner rock acts, and Metallica might be the pinnacle of it. They’re old enough to have a giant catalogue of songs, but not so old as to only appeal to old-timers. They’ve got their own set-up and draw, yet don’t only appeal to already-fans – it’d be hard to find someone at any Lollapalooza who didn’t always want to check out Metallica.

Yes, there were a lot of old-timers there, some bringing their kids in metal shirts that said things like “Kill ‘Em All” or were for Cannibal Corpse (note: you can’t accuse a kid of being a poser; that’s like getting angry at a baby in a Sonic Youth Goo onesie). This is a band who played Lollapalooza ’96! This is Beavis’ favorite band!

They had their own forward stage section, which even guitarist Kirk Hammett and bassist Robert Trujillo got to vogue on (they’re a rare act where the drummer, Lars Ulrich, might be the most famous member). Hetfield was in fine form, not just in vocals but other moments such as before suicidal “Fade To Black”, reminding the crowd (and viewers back home) that they’re not alone, please talk to someone.

Of course, Metallica has had a recent boom in popularity among the young & old thanks to a little show called Stranger Things, which after teaching a whole new generation about the amazingness of Kate Bush and “Running Up That Hill” earlier in its season, brought Eddie Munson out to rock the Upside-Down with the most metal moment ever, playing Metallica’s iconic “Master of Puppets”. The band not only closed with it, but had a video cameo from that seminal scene, and the actor Joseph Quinn (who admittedly has short hair now & has always been British) met with them backstage.

Note that if you weren’t up for the head-bang, Lollapalooza still provided two very different options for Thursday headliner. At the other end of the festival was rapper Lil Baby on the Bud Light Seltzer Stage with a more relaxed, yet still in control, set, while stuck in between at the smaller Discord Stage was the sweet Caroline Polachek, who, instead of the futile task of trying to compete with those big artists & volumes, slowed things down with pieces such as “So Hot You’re Hurting My Feelings”.