After all the action of the first two days, the proper weekend began a little slow at Lollapalooza ’22.... 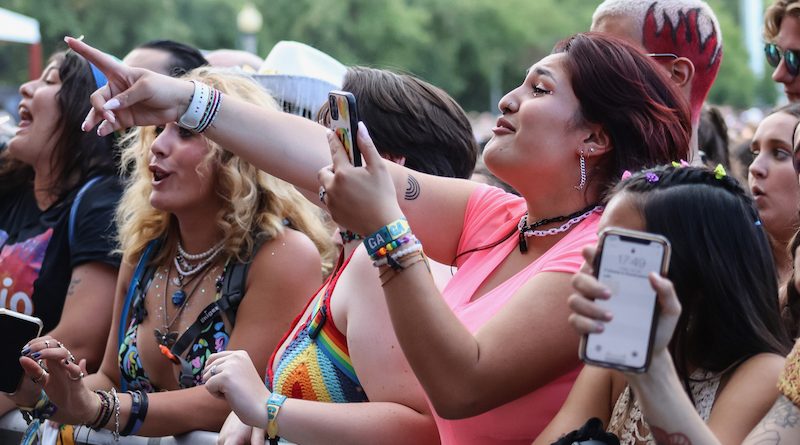 After all the action of the first two days, the proper weekend began a little slow at Lollapalooza ’22, with a bass-heavy Cochise at the T-Mobile Stage, then well-known collaborator Alexander 23 playing it relatively safe at Tito’s Bandshell (including covers of staple earworms “Everybody Wants To Rule the World” and “Since You’ve Been Gone”).

For any act playing early at a festival, under the hot sun, it can be a little tricky, with smaller crowds, and most of those there not knowing who you are. But it’s also a chance to really have fun, really enjoy just being able to play the likes of Lollapalooza, if you’re the likes of HINDS. The Madrid group had a lot of fun on the Coinbase Stage, including asking before one song if anyone in the crowd knew how to play it, basically expecting that no one would, only for a pink-haired fan named Darci to volunteer, brought up to play bass on “Garden”. If more charming than inspired, they were certainly very charming, including covering The Clash’s “Spanish Bombs” (okay, a little obvious, but they earned it), and their first original Spanish song, saying, “No Google Translate for our friends & family.” Meanwhile, the small BMI Stage had the excitable & colorful pop-punk of Meet Me @ The Altar, later on the sweeter GAYLE, who met with fans after her set (including writing out birthday wishes for one).

New Jersey’s FLETCHER is another artist who has played a lot of festivals in 2022, but you could see why on the T-Mobile Stage. She not only did her beloved hits “Undrunk” and “Becky’s So Hot”, but also debuted the new “Feel” and unreleased “You Ruined New York City For Me”, not to mention her own mash-up with Billie Eilish’s “Happier Than Ever” – and closing out by running through the excited crowd. On the other side of the musical age coin was the OG king of emo, Dashboard Confessional, playing nostalgia at the Coinbase Stage to folks who frontman Chris Carrabba admitted probably were too young to know the songs, but sang along anyway.

While the other stages at Lollapalooza vary in genre as much as the festival, Solana x Perry’s Tent is dedicated to EDM, usually home to kids & beats. But sometimes another act gets slotted in there (the DJs have pretty quick set-up & break-down times), such as Chicago rapper Lil Durk. Perry’s is wild at the lowest key of times, and this was not one of them, including cops & EMTs, and twice having to stop the set for the big screen behind him to ask (in bright red) for people to take a step back (though both times it was pulled off without much fuss). Though the toughest time might have been the rapper himself, as he was injured in the face by one of his many pyrotechnics, playing on & bandaged up afterwards.

Later on, Perry’s took another swerve, this time across the ocean with the K-Pop of Tomorrow x Together. They’ve already been billed as, “The next BTS,” and seem to be living up to it, if not at that global dominance yet. Indeed, their Lollapalooza set was kind of an introduction of them to America, with perfect dance moves and pop songs such as “Good Boy Gone Band” and “Valley of Lies”, the latter of which featured guest iann dior doing another Lolla ’22 guest appearance.

Modern alt-pop came through at the T-Mobile Stage with Hollywood’s Wallows, who include actors (of course), Dylan Minnette and Braeden Lemasters. For COIN at Tito’s Bandshell, this was the first festival this year where they’ve had pretty much their full production and played a longer set, brings songs like “Take the Stairs”, “Valentine”, and “Watering a Dead Flower” to a fest for the first time, with frontman Chase Lawrence diving into the crowd for “Into My Arms”.

One thing to note with rappers at festivals is they often stick to their usual script of having their DJ hype them up beforehand, like YG did with DJ Vision at the Coinbase Stage, which might have brought some sing-alongs and a white boy mosh pit, but also shrunk the time YG actually played. Yet the rapper still found time not only to demand, “More titties,” but also critique them. If Chelsea Cutler didn’t have as large a crowd later on at Coinbase, she still called it, “The best night of my life!”

The rhymes continued into the evening with Big Sean on the T-Mobile Stage, who brought out both YG and his quite pregnant girlfriend Jhene Aiko. And closing out Day Three at that stage was J. Cole, who improved upon his last time playing Lollapalooza (including bringing out his own guests in fellow Dreamville artists Bas and J.I.D), showing how an artist can grow over time as a performer.