Ladies (and some men) ruled on Friday at Lollapalooza '22.... 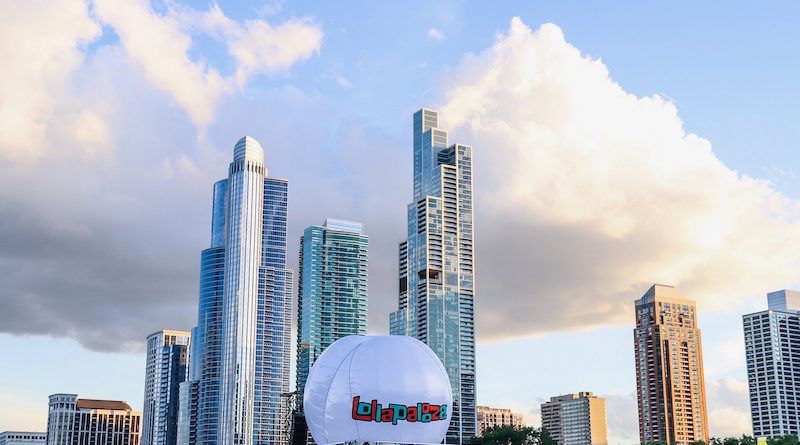 After a big Thursday that was a little headliner-focused, Friday spread out the love more, from early on to late in the day, including high female representation that shouldn’t be news, but still is.

It can be easy to judge acts just based on what they look like in their promo photo, and what you’ve come to expect at Lollapalooza, but Del Water Gap on the Coinbase Stage sounded pretty country for a guy who looked like a teen pop star. Meanwhile, Brit Mahalia on the Bud Light Seltzer Stage engaged by telling girls that they don’t need to wear a bra, “No matter the committee, itty-bitty or big fuckin’ titties…” She also asked guys to talk more, noting the stigma with men & mental health.

It couldn’t be Lollapalooza without a buzz band, and ’22 got the buzziest band of right now, the Isle of Wight’s Wet Leg. They blew people away last year with songs like “Chaise Lounge” (QRO review), “Too Late Now” (QRO review), and “Angelica” (QRO review), and delivered earlier this year with their self-titled debut (QRO review). On the Discord Stage, Hester Chambers & Rhian Teasdale were as giddy as ever, noting that it was their first festival in the States (not counting the club gigs of SXSW – QRO photos). The big crowd at the small-ish stage (it was noted that their Empty Bottle after-show sold out in about thirty seconds) clapped along to “Supermarket”, screamed along with “Ur Mum”, and of course there was a big sing-along to the highly anticipated “Chaise” closer.

In addition to the small BMI Stage at Lollapalooza, there were also second sets by some artists at two even smaller, even more sponsored spots nearby, the Toyota Music Den and Bud Light Seltzer Sessions. For instance, BMI Stage Friday opening act Daisy the Great had another go, having fun at the tiny Toyota Music Den.

At Tito’s Bandshell, The Regrettes had the crowd crouching down & getting up, livening up their catchy pop-punk, including a cover of Lily Allen’s “Smile” (though too much smoke machine at the Bandshell, as it just looked like dust in the air). Also at Tito’s was Mikaela Straus, a.k.a. King Princess, celebrating the release of her new record Hold On Baby, while MUNA brought their own great new self-titled album (QRO review) to the Discord Stage.

As the day wore on, the bands & crowds got bigger. Glass Animals have been having a huge year, and had a huge audience at the T-Mobile Stage, their big electro-pop totally fitting modern day Lollapalooza. On the other hand, Norway’s girl in red brought more kick-ass girls playing to a loving crowd at the Coinbase Stage, great lesbian romantic woes story-telling.

Last year, rapper-turned-pop-punk superstar Machine Gun Kelly both played a surprise set at Lollapalooza (with now-fiancé Megan Fox on side stage), then co-closed out Chicago’s Riot Fest (QRO photos) with some choice words about the act on the other stage, Slipknot. That certainly kept him in the press (and angered a lot of hard rock fans), but this year he’s managed to play it straight and stay big, such as with his hit record Mainstream Sellout. His massive tour (QRO photos at Madison Square Garden) has included him coming out aboard a giant pink helicopter, so many wondered what his Bud Light Seltzer Stage headline set would include.

There was the pink helicopter, though it only sat on stage (even Lollapalooza can’t bring that kind of indoor rigging to Grant Park), but there was much else. He dove into the crowd for “Into My Arms”. He was the rare Lollapalooza ’22 artist with special guests, including Avril Lavigne (“Bois Lie”), iann dior (“Fake Love Don’t Last”), and Lollapalooza performer Glaive (“More Than Life”), the last the first time that they’d ever played “Life” together. Kelly had not only a speech against letting the internet control your life, but a whole video (blowing up a big TV man). If you’re gonna be big, do it big…

Also doing it big was Dua Lipa on the T-Mobile Stage, with a totally sexy, affirming headline set. And yes, she also had killer dancers, because of course she did. The only problem? The set wasn’t streamed on Hulu like other Lollapalooza ’22 performances, something her many fans around the world bemoaned online.