Sweden’s Emil Svanängen (best know to his legions of fans as Loney Dear) spent some time with QRO.  After a grueling thirteen-hour drive to Portland, Oregon from San Francisco (how rock ‘n’ roll!), Svanängen chatted about his musical roots, the second leg of his U.S. tour, his current state of mind, and what we can expect from him in the future:

QRO:  What were your earliest musical influences?

Emil Svanängen:  I remember like, early melodic synthesizer music, sort of.  That was really early.  I liked European melodic pop music.  That was early influences.

QRO:  Did you come from a musical family?

QRO:  Was your first musical instrument the piano at age four?

ES:  Yeah, maybe touching it, playing WITH it.  I started playing clarinet when I was eight.

QRO: Why did you choose the clarinet?

ES:  I think it was the government that chose it for me.  I think I wanted to play.  My sister played clarinet.  Maybe that was sort of a factor to it.  We already knew the teacher.  It could’ve been that.

QRO:  Following in her footsteps.  Have you ever collaborated with your sister?

ES:  I’ve been trying.  She’s tough.  I think she wants to tour with me now.  Her oldest daughter, she hates wind instruments.  I mean really, she’s afraid of them.  It’s difficult.  I think she’s getting used to them now!

QRO:  This is the second leg of your U.S. tour, which wraps up in mid-October.  Is the tour continuing abroad or is this the end of the Dear John (QRO review) tour?

Actually, I tried to cancel the [next] tour yesterday.

It just sort of bounces back at you sort of… "You don’t want to cancel this tour, do you?"  It’s some sort of Kafka feeling to that sometimes.  This is sort of the end of the "Dear John" tour, yes.  I… I don’t feel I’m at that part of my career yet when I’m even out on an album tour; I just feel like I’m thrown away somewhere.  I’m doing the best I can.  It’s been a pretty nice year.  It’s like, I guess like… you learn all the time that the obstacles are… I mean that’s something you’re just going to keep repeating all the time.  I guess I’m getting used to… Strange obstacles last days has made it more difficult than ever, but I’m getting there I guess.

QRO:  Which countries were you able to tour this time around that you’ve never played for before?

ES:  We just went to Brazil and Argentina.  That was fun.  We played a great festival there.

I sort of needed that receipt that we were chosen the best band of the festival.

And the festival was sort of chosen to be the best festival in Brazil, which made me feel good because I’ve been having sort of questions about what I’m doing lately so, that was nice to hear.  We played Buenos Aires as well, which was amazing.  That’s just strange things.

QRO:  So, validation for what you’re doing?

ES: Yeah, I think I need that right now.

QRO:  What are the main differences between touring Europe and the United States, if any?

ES:  I guess that it’s… America is such a strange country.  Things change.  I mean there are really long drives so that explains the changes, but so many things happen when you drive for five hours.  That doesn’t really happen in Europe in the same way.  Still you get into other areas but… I mean you just run into strange people at gas stops in the middle of the old definition of nowhere.  I guess that’s the difference.  It’s a long flight.  I don’t know, I’m learning more every time I have to tour but now I’m back to just a big question mark.  Life is, it’s not many years left so I guess I need to start enjoying it now!

QRO:  What is the most fun thing you’ve done during your time off during this tour?

ES:  I guess I was sort of swimming in Brazil with shark risk.  That was fun.  I don’t know.  But since I came to the States it’s been, I bought a strange percussion instrument that we’re starting to use that sound a bit like a lot of bicycle bells.  It sounds like a bicycle orchestra on a stick!

QRO:  Where did you find that?

QRO:  We’ll look forward to that on a future album. 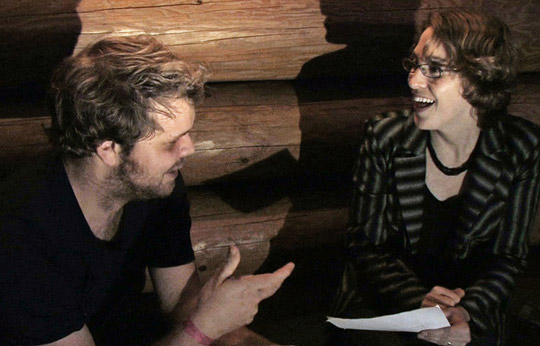 QRO:  It’s been said that some people are virtually moved to tears during your live performances.  How does it make you feel knowing you have the ability to stir such strong emotions in people?

ES:  I don’t, I haven’t seen that myself and I used to feel that I… remember that five-ten years ago when I was watching an artist and I was thinking if I would be able to go up there, I would do such an impact.  And sort of now I just feel… I don’t know what to do.  Um, I mean, I’m not even sure if I… I sort of believe you when you say that but a part of me doesn’t think your speaking truth, so I don’t know what to say.  It’s amazing if that’s true.

QRO:  What are you most proud of musically speaking?

QRO:  How was that different from your previous recording?

ES:  I mean, those were part of… that was all in one stroke really.  And then life became a bit easier after a few years, but creating became so much more difficult.  That was… I hope that’s going to return sometime.  That was a great.  That was a great time recording that.

QRO:  If you had to pick one song of yours for someone to listen to who wasn’t familiar with your music, which song would you choose and why?

ES:  I mean, I guess that’s what you struggle with all the time.  Which song is, is me?  It would probably be a song with more music than with heavier music than heavy lyrics.  I really like "Sinister In a State of Hope" and I really like the song "Violent" from the new record.  I really like our live version of "Everything Turns To You".  I guess I’m working on that song still, that most important one.  I think and hope something is going to happen next year.  Some sort of elevator thing.  Meaning, not in a literal way, but something… I’m waiting for some sort of bump right now something to…

QRO:  That will lift you to the next phase?

QRO:  Have you started material on your next album?

QRO:  Do you have a release date set?

ES:  Not at all.  I think as soon as possible is the best one.

QRO:  Have you noticed any significant changes between what you’re playing with now and your current catalogue?

I’m fairly up to date with the movement forward and the live record.  I don’t know what’s going to happen.  I just want it to be more profound or something.  More important.  More, more…

QRO:  You’re not trying to re-invent yourself for the next record?

QRO:  What do you think of music videos?

ES:  That’s amazing.  I mean, for me it’s just been lack of time all the time with what I’m doing.  I’ve never really had a fair chance to express what I want to do with video so far so it’s… there’s one video some guy from Houston made for me for the song "Distant" that’s just a time lapse video.  I love that one; I really love that one.  I guess.

QRO:  Was that the bridge?

ES:  No that was the one with just like um, an oil tanker ship going up the channel.  It’s pretty amazing.

QRO:  Since we’re in Portland, although you’ve not had a chance today obviously because of the thirteen-hour drive, have you had a chance to explore Portland in the past?

ES:  Yeah, I’ve been having some really amazing things happening here, just meeting people.  I’m sort of trying to discover the city still.  I’m getting to learn things.  I have my ideas of how the city works but I don’t think I know a lot of things yet.

ES:  Yeah, it’s amazing.  It’s one of my favorite cities.