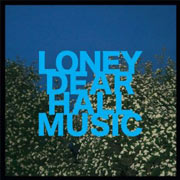 Since the implosion of Swedish indie pop years ago (QRO Swedish Sensations), the Nordic nation continues to be prolific in churning out new acts, expanding musical diversity over the years.  From electronica of The Knife to lo-fi punk pop of Love Is All (QRO album review) to the woodsy folk of José González, finding music to your ears should be effortless.  Amid the sonic assortment, you can count on Sweden’s everlasting love affair for the melancholy.  Stockholm-based singer/songwriter Emil Svanängen (QRO interview) is a perfect example of a musician preoccupied with the lugubriousness.

On Svanängen’s sixth LP, the appropriately titled Hall Music, with its expansive reverb and baroque flavor reaches a new grandeur in Loney Dear catalogue.  Unlike the bedroom pop of his earlier work, the sweeping pop symphony of Hall Music begs to be played in a grand concert hall with a full orchestra.  Unfortunately, the grandeur it achieves is not so much through the mastery of the craft, but its ornate and extravagant use of instrumentation.

Opening with the most uninviting track of the LP inaccurately forecasts the rest of Hall.  "Name" starts off harmless enough with Svanängen’s voice dominating the slow opener with faint strokes from the organ.  But after about half way through, the song becomes dissonant as his voice climbs into a screeching falsetto, paired with equally piercing keys.  Luckily, the cacophony lasts less than a minute then we are introduced to the very soothing "My Heart" – a quintessential Loney Dear track with effortless melody and sing-song candor that shimmers.  The same could be said about the following number, "Blues" – a gorgeous ballad, but it could lose the chime-y, sweeping keyboard and utilize more notes in the lower end of the scale.  Long time collaborator Malin Ståhlberg sings on the final track, "What Have I Become?".  One of the better arrangements of the album, its bookend position seems to be a tacked on bonus track, but it could also signify an unfinished chapter of what’s to come.

An artist needs to evolve their style over time in order to keep up interest for themselves and their audience.  Svanängen himself has stated that he’s making a "different" kind of music and wanted Hall Music to be a departure from his previous record, Dear John (QRO review).  Certainly the tricenarian has achieved his goal by suppressing the dark ambience that propelled his previous effort, save for tracks like "D Major" and "Largo", which pares down instrumentation to allow much needed hollowness on a very ornate album.  Svanängen has managed to make a sound of indiscernible amount of instrumentation; on "Maria, Is That You", brass, percussion, strings, woodwind, etc. are piled on senselessly.  Overall, Hall Music is bit too bright – too tinny, shimmery, and treble heavy to be enjoyable for the whole ride, but you can bet that Loney Dear’s pensively sad crooning will befriend your misery.