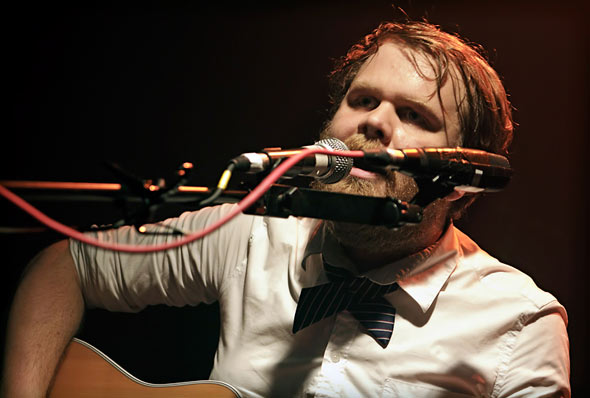 Click here for QRO’s review of Loney Dear at Doug Fir Lounge in Portland, OR on October 3rd, 2009

Click here for photos of Loney Dear at Webster Hall in New York, NY on June 7th, 2007 in the QRO Concert Photo Gallery

O Patro Vys (Czech for, "the next level") is a multi-functional space run by a non-profit organization to support creative projects in the artsy Mont-Royal neighborhood in Montreal.  On a wintry autumn night of November 4th, the intimate second level venue welcomed an entertainer no stranger to the frigid temperatures.  Swedish singer/songwriter Emil Svanängen – a.k.a. Loney Dear – made his second stop in the French Canadian city on a brief six-date North American tour to promote his sixth LP, Hall Music.

Unlike Loney Dear’s previous tour when Svanängen brought along a full band (a drummer, a keyboardist, and a female backup singer/multi-instrumentalist), he was almost a one-man show this time around.  Occasionally, a red-haired Swedish lady provided backing vocals and keyboards.  Before the lights lowered, the idea of a solo performance didn’t sound like the best fit for Svanängen’s most ornate album to date.  But after a few minutes, the former pro-cyclist demonstrated that even the most grandiose Loney Dear tune could be transformed to suit the most modest setup.

A compact drum kit to stage right, laptop on the floor to stage left, and an arc of effects pedals enclosed a chair where Svanängen would sit with his twelve-string acoustic guitar.  He removed his black shoes to reveal blue socks that would be as busy as his fingers.  Wearing white oxford shirt, black trousers, and a bow-tie – all less than pristine to match his mounting beard and tousled hair – Svanängen tried to get comfortable in the myriad of gadgets he must conquer to pull of his sweet, melancholy bedroom pop.

The eleven-song set, mostly about lonely hearts, started and finished off quietly with Svanängen singing along to his acoustic guitar, while the core of the show saw him trying to throw in as much percussion as possible via drum kit, tambourine, or hand clapping.  Opening track, "Names", from Hall Music, warmed up the Swede’s falsetto.  The Stockholm resident followed the new track with tunes form previous albums – "Violent" and "I Was Only Going Out" from Dear John (QRO review) and "Saturday Waits" from Loney Noir (QRO review)

before returning to play several tracks off his new album.  After "D Major", Svanängen stood up to take a bow and turned away from the crowd for a moment to symbolize his exit and return to stage to play encore.  Loney Dear closed out the show with older material – "Sinister In A Sate of Hope" and "Dear John"/ "I Love You (In With The Arms)".

People who are familiar with the Loney Dear show know that Svanängen’s bantering is just as entertaining as his musical performance.  With heavy Swedish accent, the curly-haired musician’s remarks come off like an innocent child discovering things for the first time, with a humor that seems unintentional.  For example, before playing "Young Hearts", Svanängen had the crowd chuckling when he told the audience why they had to sing: "It seems like – British Airways broke the E and F in this song… well, it doesn’t matter, this sounds almost like pedagodic, pedagogic?  Is that the word?  Pedagogical – thing that I don’t have that F note so you’ll have to sing it."  While Svanängen’s songs become an event with a full band, a disheveled performer alone in the spotlight singing about all the woes love can bring seemed to fit perfect for the idea of what Loney Dear is.

After a long drive from New York City, which Svanängen referred to as "the other city," he was eager to drink and mingle with the merry crowd who had been cheering him along.  While Montreal may have seen few specks of snow that day, inside O Patro Vys, the warmth not only came from the packed bodies but the regards from the audience charmed by Loney Dear’s sincere effort to entertain.