<img src="http://www.qromag.com/wp-content/uploads/2012/07/loscampesinosjun22.jpg" alt="Los Campesinos! : Live" />Los Campesinos! have not mellowed with age - and neither have their fans. ... 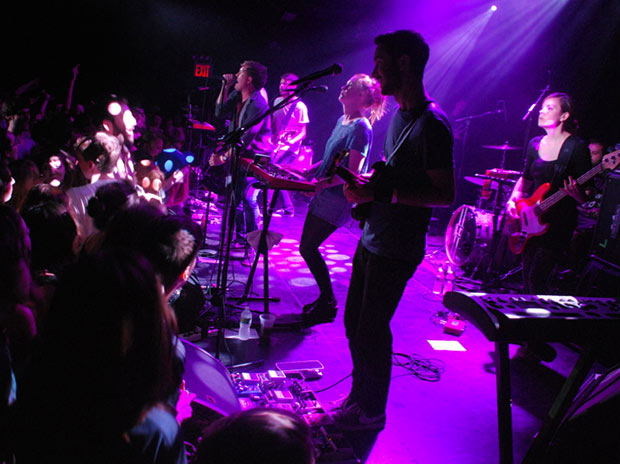 From their very beginning, Los Campesinos! have been fueled by a manic, youthful energy, and only more so live.  Yet there have also been signs in recent years that the collective has been calming down.  2010’s Romance Is Boring (QRO review) had as first single “The Sea Is a Good Place To Think About the Future” (QRO video), a great song – perhaps their best ever – but also a slow and sad one, even if also a cry against decay.  Last year’s Hello Sadness (QRO review) particularly restrained the exuberance, with even the biggest songs such as the title track or other single “By Your Hand” having a slower beat.  They’ve lost members (QRO interview), gotten new members (QRO interview), and even fired a member (QRO interview).  They’ve played on TV (QRO Indie on Late Night TV) – they’ve even successfully marketed their music (getting that sweet ‘Budweiser Ad’ money…).  In short, the elfin, twee sugar-rush kids have grown up.

But judging by their show at New York’s (le) Poisson Rouge on Friday, June 22nd, Los Campesinos! have not mellowed with age – and neither have their fans.

LC!’s second tour of the States behind Sadness, the (le) Poisson Rouge show in particular would have seemed to be a mellower set, as the place is more known for seated shows (QRO venue review) and tries to maintain an artsy, cultured, worldly air to it (thus the French name).  And the show was the middle of three in the NYC area – the night before had been at Maxwell’s (QRO venue review) in Hoboken, New Jersey, and the night after was at Brooklyn Bowl (QRO venue review) in (yes) Brooklyn, two venues that are much more suited for rollicking good times.  The space even seemed to limit opener Yellow Ostrich (QRO photos) from rocking as much as they do on record.

But instead you had a super-excited crowd ready to go from the first notes of “By Your Hand”.  There was even crowd surfing during the first song, which singer Gareth Campesinos! (QRO interview) jokingly remarked right in the middle of the piece, “You’re too old to do that – get down…”  That wasn’t the only time that Gareth actually tried to calm the crowd down, but always with humor. 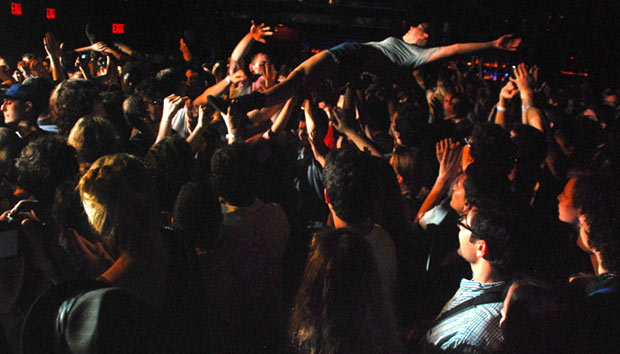 Los Campesinos! would kindly request that you bear in mind that there are many delicate, attractive girls in the first row.  And, in approximately one hour’s time, you’re gonna be trying to make out with them – so treat them good now, okay?

I don’t want to seem like a killjoy, but that circle pit thing is really lame.  If you’re up here, it just looks like a bunch of dudes bumping into each other, and lots of small people getting crushed…

Note that he seemed to be only talking about guys being too exuberant – no remark on girls jumping on stage, as a few did throughout the show (one even kissing singer/keyboardist – and Gareth’s real-life sister – Kim on the cheek), as well as crowd surfing themselves.  Instead he introduced a song, “This is a song about your girlfriend – as if you have a girlfriend… [directed at one tall, enthused fan in the middle of what had been the circle pit] This is ‘Song About Your Boyfriend’.”  Maybe Gareth was thinking that in an hour’s time he’d be trying to make out with one of the many delicate, attractive girls in the first row… 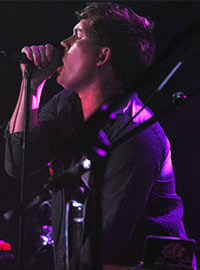 Los Campesinos! mixed from their four full-lengths, going so far on the set list (QRO photo) as to never play two songs in a row from the same album.  However, despite this being a tour behind Sadness, they did one more song from Romance than from Sadness (admittedly an encore return that wasn’t on the set list – the show was scheduled to start & end early, with another show lined up afterwards, so LC! likely weren’t sure if they’d have time for an encore).  And they didn’t skip on the energetic classics from their debut LP, Hold On Now, Youngster… (QRO review), from their best-known (and not just because it was featured in the ad for Buds) “Death To Los Campesinos!” – in the middle of which Gareth made that comment about watching out for the girls up front – to the evening’s closer, “Sweet Dreams, Sweet Cheeks”, which had long been their standard show-closer, but had recently been supplanted by Sadness‘ “Baby I Got the Death Rattle” (which was how they closed before the encore break, and the last song on the official set list). 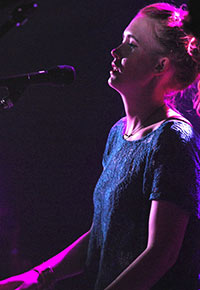 At this point in Los Campesinos!’s career, at any show there are going to be songs you wished they played live that they didn’t – Gareth even joked that they’d play all the songs you’d wanted them to play but didn’t the next night at Brooklyn Bowl.  And there are members no longer with the band that you miss seeing – though Kim is helping even QRO get over Aleks Campesinos (QRO’s Tribute to Aleks Campesinos).  They’ve even been around the block enough to complain about how they were filmed on TV – Gareth mentioned that guest trumpet player Tim [Campesinos, at least for that night] was with them when they were on Letterman, and only plays with the band when they’re in New York, “but somebody didn’t tell the cameraman,” who featured Tim far too much, “and he’s been dining out on it ever since…”  But Los Campesinos! have not mellowed with age.