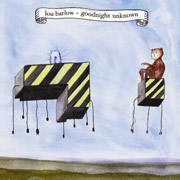 These last few years has seen the major resurgence of Lou Barlow.  First, the once-bassist of Dinosaur Jr. (QRO live review) was part of that band’s reunion, first to tour re-releases of old material, then putting out not one, but two new records, Beyond (QRO review) and Farm (QRO review).  Barlow was also part of the original line-up reunion & tour of another of his old bands, Sebadoh (QRO live review).  And now he’s out with his second solo record on Merge, Goodnight Unknown – as if he wasn’t doing enough already…

While in Dinosaur Jr., Barlow stood in the shadow of legendary alt-punk guitarist J Mascis (that was the reason he left/was fired), but he was the biggest player in Sebadoh, so it’s understandable that Goodnight Unknown hews more to the latter.  However, it also hews more towards Sebadoh than his first Merge release, Emoh (“Which wasn’t emo…” – Barlow at Merge’s SXSW 2009 showcase – QRO recap), adding more of Sebadoh’s echo/reverb than the more alt-folk Emoh.  And that’s a good thing, not just because there are a million-and-one alt-folk artists out there already, but Barlow also doesn’t overdo it, like would sometimes happen in Sebadoh (QRO re-release review). Tracks like opener “Sharing”, or “The Right”, “Gravitate”, “One Machine, One Long Fight”, and “One Note Tone” all hold this up nicely.

There are some more stripped songs on Goodnight Unknown, such as “Too Much Freedom”, “The One I Call”, or “Take Advantage”; though not as memorable as the more Sebadoh-y pieces, they do let Barlow’s under-appreciated voice stand out.  At fourteen songs on a solo record, some of them are naturally forgettable, such as “I’m Thinking”, “Modesty”, or “Don’t Apologize”.  But there’s a reason Barlow’s so in demand these days.