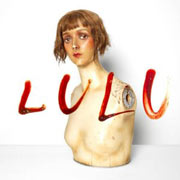 In the QRO rating system, the 4.0 to 4.9 range means "someone goofed."  There really isn’t a better way to sum up this year’s Lou Reed & Metallica collaboration Lulu than just that, someone goofed.  Whoever that was exactly thought that the concept of these two acts joining forces would be way cooler than it actually has been.

Lou Reed and Metallica first collaborated for the Rock & Roll Hall of Fame 25th Anniversary concerts back in 2009 and apparently thought that it would be a good idea to not leave well enough alone.  So they reconvened early this year and the product is this gem that has almost universally been received as some kind of joke.

Click here for photos of Metallica at Nassau Coliseum in Uniondale, NY on January 29th, 2009 in the QRO Concert Photo Gallery

To get right to it, as far as the Metallica half of Lulu goes, absolutely nothing is new or different about their sound aside from the fact that Lou Reed is talking, that’s right, not singing, but talking over it.

Reed is a musical legend, to be sure.  But how he represents himself here can’t help but make one tilt his or her head when subject to lyrics like, "I would cut my legs and tits off / When I think of Boris Karloff and Kinski," from the album’s opener "Brandenburg Gate" or "If you can’t put a butterfly in a jar / If violence mars your final hour / If you make others feel like jam / Poured on a piece of charbroiled lamb," on the song "Iced Honey".  It is easy to see from this project that Reed is approaching it from a rock opera standpoint, but the result is just plain awkward.

As with many Metallica albums past, Lulu is way longer than it should be.  Two tracks clock in over eleven minutes and the album’s closer, "Junior Dad" lasts just shy of twenty.  This does, however, prove to be one of the album’s more enjoyable tracks as the latter half of it exhibits a movie-like string arrangement.  But the majority of the tracks feel completely repetitive.

The song "Mistress Dread" would normally please Master of Puppets-era Metallica fans due to its speed metal feel.  However, it’s lack of chord changes and Reed’s vocals just make it downright annoying.  It’s almost as though they literally thought, "What would it be like if we just played the same note for almost seven minutes?"

The sorrows far outweigh the joys on Lulu.  Its main problem is that it doesn’t sound thought out.  It sounds exactly as if Metallica got in a room, came up with the best riffs they could at the time and then just had Lou Reed come in and speak over it with some lyrics he had in his reserves.  It’s definitely an interesting album, but not the wild and crazy surprise they led people to believe early in the year when they announced they were working on a project that was "not 100 percent a Metallica record."  Hardcore fans of Reed and Metallica will surely purchase it out of loyalty.  But it’ll spend the rest of its life on their shelf purely as a part of their collection.