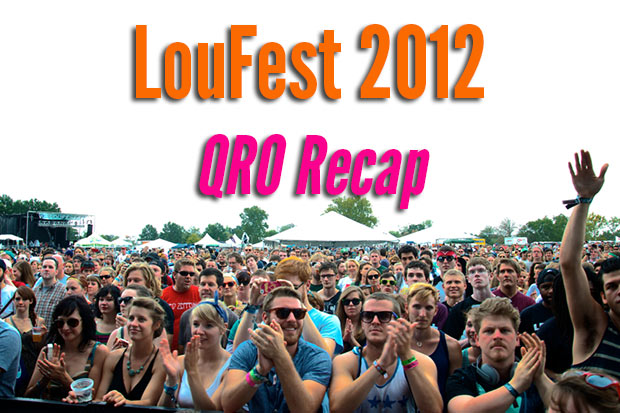 What would a music festival be without a bit of rain?  Festivalgoers come well prepared for a little adverse weather.  That was certainly the case on the weekend of August 25th & 26th in St. Louis, as the good people of LouFest didn’t let the rain ruin their festival.

LouFest is in its third year of existence, and still very much a festival learning the ropes.  It’s a small festival, and excluding the kid stage – which was stocked with Disney Channel-style cover bands – there are only two stages, and the acts alternate between the two.  Of course, this means that concertgoers don’t have to face the age-old dilemma of what band you want to see more when band play simultaneously.  The festival grounds are fairly small, and completely contained within the area of Forest Park know as Central Field.  It’s a clearing on top of a hill, and that there’s no camping available certainly affects the demographic and (odor) of the concertgoers.  Festival vendors are limited in comparison to the mega festival spread of events like Lollapalooza and Coachella, but in all fairness, you don’t go to a music festival for the amenities.

You go to a music festival to hear new music, revisit old favorites, and most importantly frolic about while bathing in either confetti or mud.  LouFest provided it all. 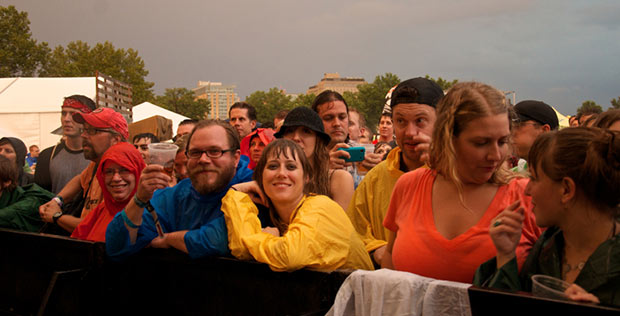 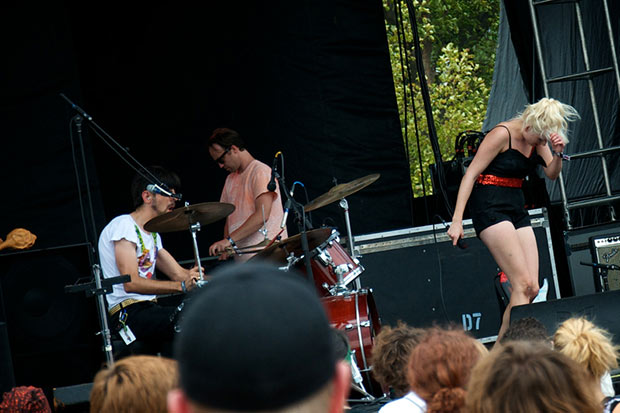 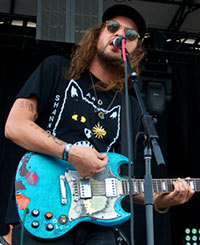 Day One kicked off with St. Louis natives Sleepy Kitty, followed by King Tuff and Cotton Mather.  It was a slow morning.  Sleepy Kitty failed to leave much of an impression, and LA’s King Tuff seemed to be more interested in flying back to LA than putting forward a decent set.  Disappointment of the day, however, goes to the smug and mildly talented members of Cotton Mather.  When frontman Robert Harrison took the stage he launched into a gratuitous intro surely designed for a band with a bigger following.  Cotton Mather’s set was fantastically forgettable.  The band is a traditional four-piece setup, and although all the musicians are technically sound, the songwriting lacks a certain spark, and Harrison’s greater-than-thou attitude is as off-putting as it is misplaced.  Noel Gallagher has earned the right to be an asshole; Robert Harrison is… not worth blathering on about. 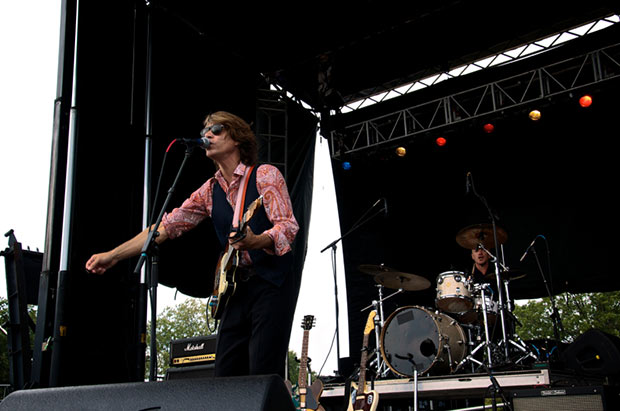 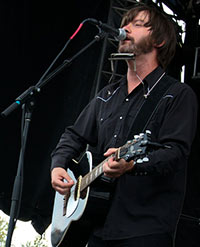 Little Barrie followed Cotton Mather, and brought some desperately needed eager energy to LouFest.  The English trio’s golden guitar licks and boisterous rhythms were reminiscent of Aussie rockers Wolfmother, but without the sheer pop appeal.  The trio is still missing something special, but the pieces for success are all there.  Son Volt, 1/2 of the band formerly known as Uncle Tupelo, is always a big pull in their hometown of St. Louis.  For many attendees, Son Volt was the act of the day.  The other half of that Uncle Tupelo band?  None other than Wilco (QRO live review), and it’s clear why one half of Uncle Tupelo shot to fame while the other enjoyed only modest success.  The crowd didn’t seem to care, as Son Volt was the first show of the day with an audience that was fully and completely enjoyed by the majority of the crowd.  Rain had threatened to cancel Son Volt’s set, but it let up just in time. 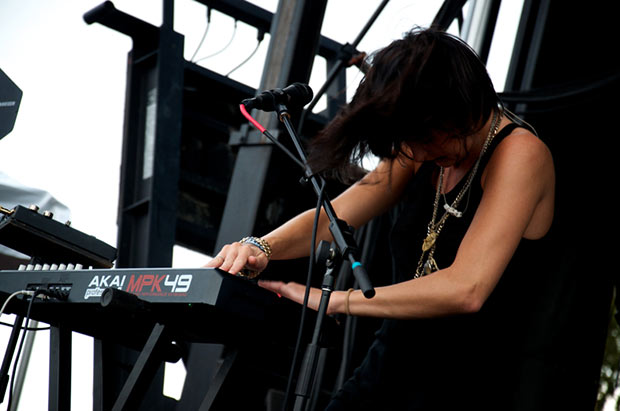 From that point the day took a turn.  The first half of the day seemed clearly targeted for an older crowd with more alt-country tastes, but Phantogram brought the heat with beats for miles.  Their sound is a wonderful mix of hip-hop influenced breakbeats layered with rhythmic and distorted guitar leads, garnished by the vocal stylings of a lead singer who is equal parts talented and attractive.  She wielded the Akai Sampler and vocal modifier with skill and ease, and the result was absolutely fantastic. 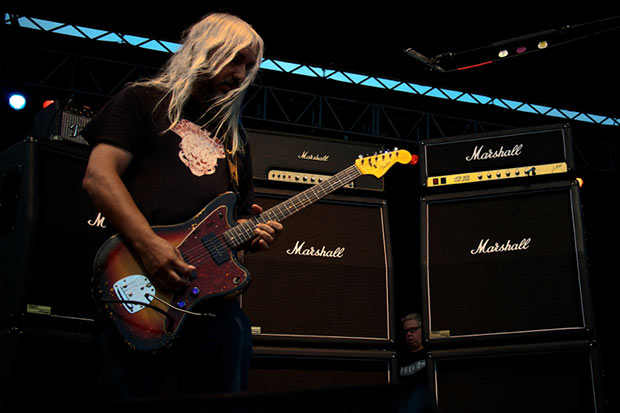 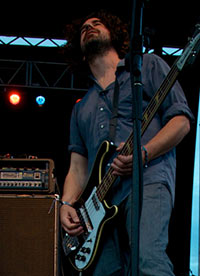 Dinosaur Jr. battled the rain with a raucous set.  Dinosaur Jr. is really good at playing loud, and that they did.  As night fell, the crowd began to morph from fans of Son Volt to hordes of neon clad and body painted Girl Talk aficionados, prepped and ready to get sweaty.  A Girl Talk show is an interesting combination of genres, and an unbelievable culmination of energy.  He brings about 30 fans onstage to dance, and pelts the audience with toilet paper launched from leaf blowers.  The LCD screens on his backdrop flash through imagery loosely related to the tracks currently being mashed up.  But what is truly impressive about Girl Talk is his ability to press people’s buttons.  Yes, he played the same set that he’s been performing for the last year or so, but it’s a set that works.  He knows exactly when a groove is getting old, and quickly moves into a new track.  Ha manages to make irresistible dance tracks from the most unlikely of sources, and his set was a great way to close out day one. 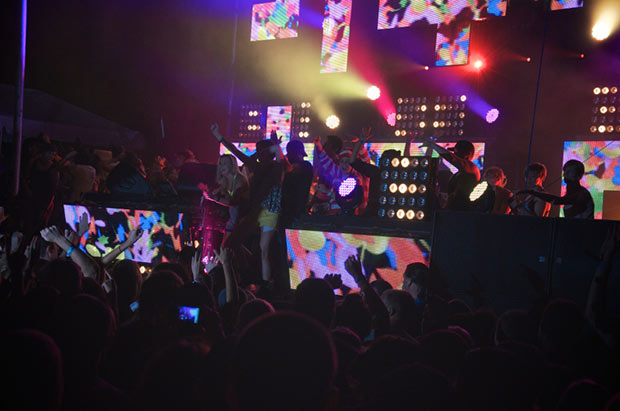 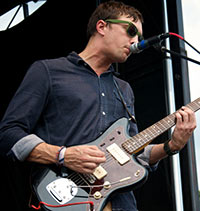 Local trio The Perkinoff Brothers jammed like there was no tomorrow.  It was fairly clear that this was one of the largest shows they’d played, and the wide-eyed local act was honest and full of cheer on stage.  The set was endearing, if unspectacular.  Spectacular was to be reserved for later that night.

THEESatisfaction took the second slot of the day, and their verve was infectious.  The hip-hop duo clearly takes some cues from fellow Seattle group Shabazz Palaces (QRO album review).  The girls’ funk and self-made beats provided a welcome break from the guitar rock that dominated the festival to that point.  The ladies of THEESatisfaction brought choreographed dance moves, rhymes, and sultry crooning to LouFest, just in time to keep the attention of the younger crowd.  And indeed the rest of the day turned out to be more geared to the younger crowd.

Indie rockers Someone Still Loves You Boris Yeltsin hail from Missouri, and a home-state crowd is a friendly crowd.  But there’s a reason that SSLYBY never really blew up; like many of the bands from Day One, they lack a spark.  Their set was solid, yet unspectacular.  It’s generic indie rock at its finest. 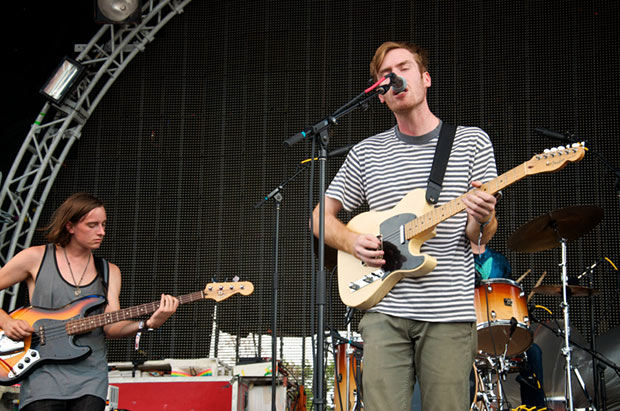 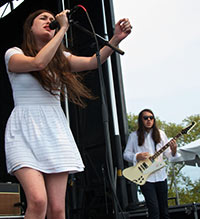 Wild Nothing is one of dream-pop’s newest sweethearts, with a new album set to drop soon, and their reverb drenched ‘80s sound was fodder for sing-a-longs from the crowd.  Day Two brought a much more youthful feel to the festival, due in no small part to the more current lineup.

Cults were absolute hit makers with last year’s “Go Outside”, so much was expected from their set, but curiously enough, they came off as young and inexperienced.  It took a few songs before the lead singer seemed comfortable, and a few songs seemed to fall completely flat.  Of course their smash hit was a smash hit, but perhaps a few more years of performing will do the group well. 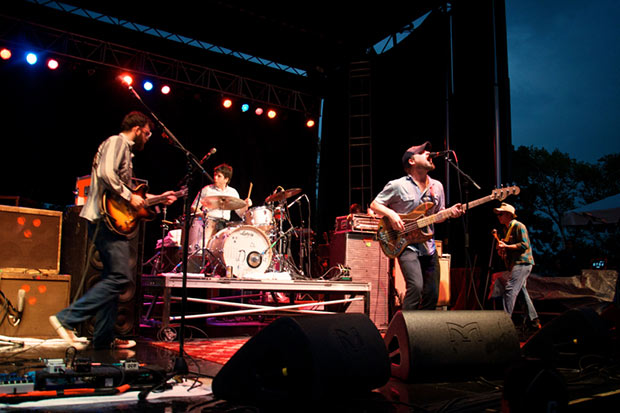 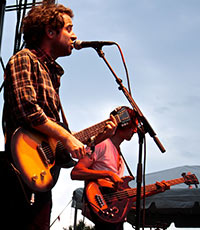 The biggest surprise of the festival was far and away Dawes.  Known more for a laid back sound, Dawes absolutely rocked the festival.  Their blend of Rhodes-heavy folk-rock was the perfect mix for the audience, and despite the rain that picked up during their set, eventually forcing them off early, before they even got a chance to play their single “Time Spent In Los Angeles”.  That didn’t phase the crowd, and the charisma and guitar skills of frontman Taylor Goldsmith combined with the energy of drummer Tay Straihairn made for a set that was wholly entertaining.  The sound was reminiscent of Crosby, Stills, Nash and Young – but it was in no way old-fashioned.  Don’t miss Dawes if they roll through your city.

Dr. Dog got the short end of the stick, as the rain shortened their set to a measly 40 or so minutes, but those that stuck around through the rain delay were treated to some terrific sounds of jam band extraordinaire.  It was the perfect compliment to Dawes and the perfect appetizer for the circus of the Flaming Lips. 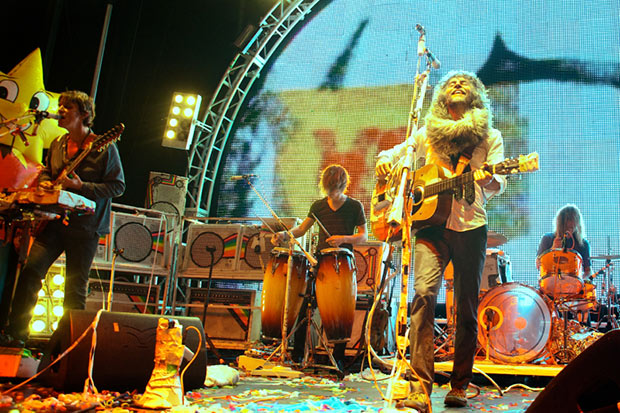 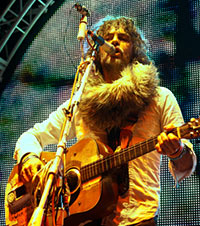 If you’ve never been to a Flaming Lips show, it may be hard to understand the spectacle that takes place.  When the confetti cannons fire and the oversized balloons are released when the first chorus hits, it’s as if your heart is being restarted.  Looking up into the sky and seeing nothing but multicolor with everyone else in the audience is a surreal experience and a shock to the system.  It feels like your birthday.  Wayne Coyne (QRO interview) busted out the old crowd surfing hamster ball and took a stroll out through the crowd, as he is wont to do.  About two-thirds through the show, two concertgoers fully clad in bunny suits made their way to where I was taking it all in.  They were wandering about the crowd giving out hugs and posing for pictures.  It was a surreal experience that seemed only fitting with what was happening on stage, as Coyne was putting on his sheet of foil. 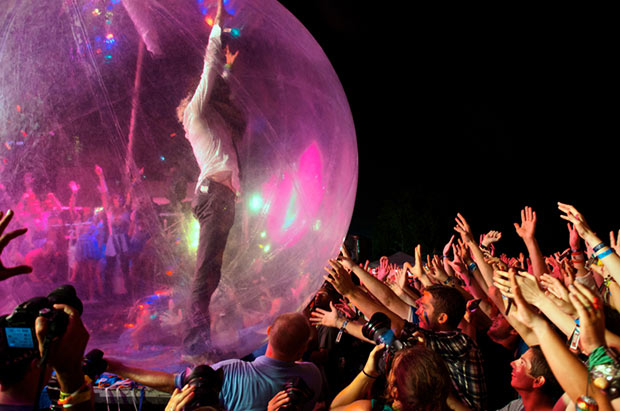 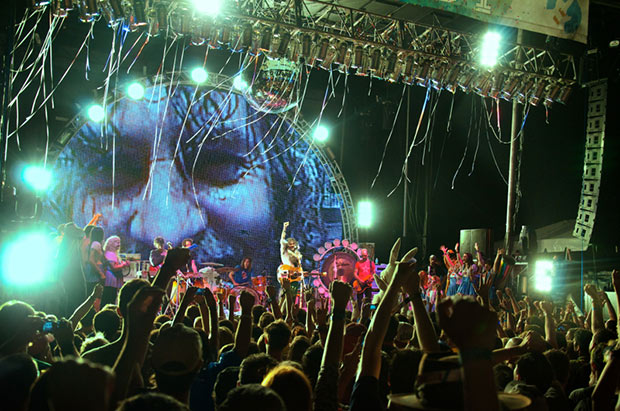 LouFest was by no means a failure, but it has plenty of room to grow.  As the festival gains a footing in the national scene it’ll be able to draw larger acts earlier in the day and avoid the lull that curses early sets.  The Flaming Lips are the perfect way to close out any music festival.  They can completely transform an event from mediocre to fantastic, by sheer power of will and confetti cannon.  If you find yourself in St. Louis during the late summer, LouFest is well worth the price of admission. 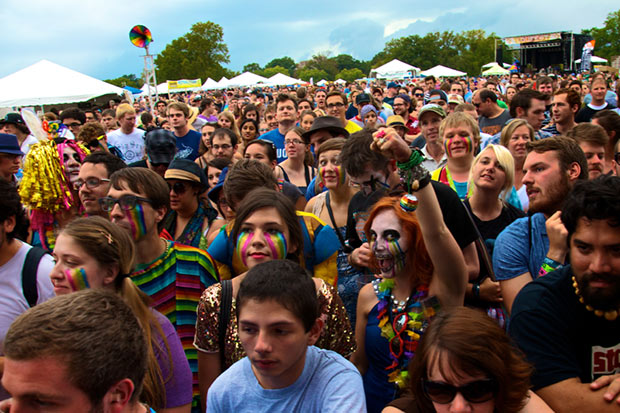