Sometimes, skilled artists need to take a step back.... 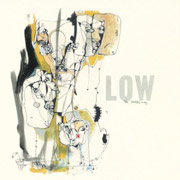 Sometimes, skilled artists need to take a step back.  ‘Slowcore’ outfit Low has long since shown that they are skilled musicians, basically inventing the genre (whose name they don’t like) and delivering exquisite beauty on albums like 2005’s The Great Destroyer (tracks of which were covered by none other than Robert Plant – QRO live review).  The band didn’t repeat themselves, but went more minimalist, on 2007’s Drums and Guns (QRO review), but 2011’s C’mon (QRO review) fell into a plodding nature that you could feel that the band enjoyed, even if you didn’t.  But Low organize themselves better on The Invisible Way.

Now, this is still Low we’re talking about here – the songs are beautiful, mixing vocal duties between husband Alan Sparhawk and wife Mimi Parker, and the volume is, well, low.  But the band manages not to get lost in what they do well, but rather either deliver efficiently or add something new.  The best example of the latter is opener “Plastic Cup”, which manages to introduce some humor into the serious act (still delivered matter-of-factly by Sparhawk).  Parker’s “Just Make It Stop” brings pressure to bear, which makes for more effective emotion.  Meanwhile, Low does slow country great on “Clarence White” (a style their producer knows something about: Jeff Tweedy of alt-country all-stars Wilco – QRO live review).  There are still a few errors – the C’mon plod returns a bit on “Waiting”, and the poppy “On My Own” randomly goes into grand thump.

By the time of Parker’s beautiful coda closer, “To Our Knees”, the sheer beauty of Low has washed over you.  Amidst all of today’s ultra low-key alt-folk acts (looking at you, Bon Iver – QRO live review), get into a band that’s been doing it effectively for far longer.