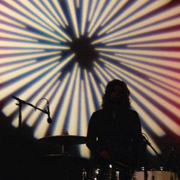 Throughout their career, Low has made a habit of confounding expectations.  Early in their career, when the Duluth band (centered around husband-and-wife Mimi Parker and Alan Sparhawk) was faced with less-than-receptive audiences, they would actually turn their volume down.  More recently, after 2005’s acclaimed Great Destroyer, the group didn’t repeat themselves, but instead returned to their more minimalist sound with 2007’s Drums and Guns (QRO review).  Four years later, C’mon eschews both of those styles for a focus on beauty that rewards, but also a plodding nature that doesn’t.

C’mon can be a frustrating record, because it mixes great songs with ones that are anything but.  The lilting lullaby that isn’t a lullaby “Try To Sleep” is actually rather evocative as it opens the album, but the following “You See Everything” goes soft rock.  Then comes the strong “Witches”, an oh-so-darkly procession forward that chills like the best of Stephen King – but then “Done” just plods along in sad alt-folk.  “Especially Me” combines sadness, beauty, and an ominous nature that impresses, but the beauty of “$20” is just plodding.

Low’s tendency to slow, quiet-loud processionals can get as tiresome as the style on C’mon, taking away both from the pretty but lacking in substance “Nightingale”, but also the growing “Majestic/Magic” and “Nothing But Heart” before and after “Nightingale”.  Only the sweet folk of closer “Something’s Turning Over” avoids it, but lacks anything else to make it feel more than simplistic.

C’mon frustrates because Low is a frustrating band, not only not doing what you’d expect, but also not doing what you’d hoped.  They have the talent to join acclaimed Sub Pop labelmates like beautiful Beach House (QRO live review) or Iron & Wine (QRO album review), but instead chose a much less traveled road.  But there’s a reason that fewer plod down the road that Low chooses.