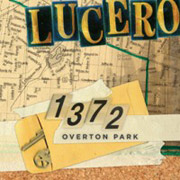 Somewhere along the way, late in this decade’s development of emo-rock, Blue State America’s embracing of alt-country, and the most recent revival of Bruce Springsteen (QRO live review), a ‘workingman’s punk’ developed.  Grittier and more grown-up than emo, more down-to-earth than ‘regular’ punk rock, and with serious blue-collar sensibilities, the sound has taken off both on the coasts & in the heartland, in bands like The Gaslight Anthem (QRO photos), Flogging Molly (QRO photos) – and Lucero.  The Memphis-based act is more cow-punk than, say, the Celtic-tinged Molly, but definitely mid-South/Appalachia, not Confederacy.  The success of that sound led Lucero to sign a four-album major label deal (and to get singer/guitarist Ben Nichols his own quasi-fictional MTV series about the Memphis music scene, $5 Cover).  Three years after their last, Rebels, Rogues & Sworn Brothers, Lucero finally make their Universal debut with 1372 Overton Park, and give the strongest cast yet for workingman’s punk.

One of the secret, unsuspected weapons on Overton Park is horns.  On their most upbeat numbers, Lucero play like an updated version of early, classic Billy Joel (in the vein of the excellence that is "The Underdog" – QRO video – from Spoon’s excellent Ga Ga Ga Ga Ga – QRO review), on such tracks as "What Are You Willing To Lose" & "The Devil and Maggie Chascarillo".  But even when Lucero go up-tempo, there’s still blue-collar undertones.

The country inflection to Lucero has been declining ever since Rebels, but there are still a number of sadder songs on Overton Park.  While the ‘please say goodbye’ "Goodbye Again" and ‘please come back’ "Darken My Door" both get a little overwrought at times, the Boss-like gravel to Nichols’ voice gives weight to "Can’t Feel a Thing" and "Hey Darlin’ Do You Gamble".  The latter also brings back some of the band’s earlier twang, which is only heightened on the following finisher, "Mom", which goes sad and stripped to close things out.

‘Workingman’s punk’ has annoyed punksters, who feel it doesn’t ‘fight the system’ enough, while hipsters think it’s too, well, working class.  And there is the (more substantial) knock that it’s a little too simple, a little too pat, a little too mainstream, a little too regular rock.  But Lucero are standing up for their sound.