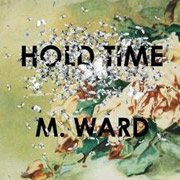 Although M. Ward has been making acclaimed alt-country/folk for a decade or so, he’s still best known for his work with others.  Even his last solo record, Post-War, only got mainstream attention after Ward played guitar in support of Conor Oberst (Bright Eyes) on Late Night with David Letterman in 2004, and Oberst shouted, “M. Ward for President!”  Ward has worked with a who’s-who of bigger solo indie-folk artists, from Oberst’s Cassadega (QRO review) to ladies like Cat Power (QRO live review), Beth Orton, Jenny Lewis (QRO album review), and, most recently, teaming up with actress Zooey Deschanel (Elf, Yes Man) as She & Him last year with Volume One (QRO review).  But now Ward returns to himself with his first solo record in three years, Hold Time, and seems only better for the wear.

Not that Ward is entirely on his own, as he gets some contributing vocals on a few tracks, which happen to be some of the best.  Deschanel returns the favor (even though she’s marrying Benjamin Gibbard of Death Cab For Cutie – QRO album review) with backing vocals on the relaxed, dirty-blues charmer “Never Had Nobody Like You”, as well as on Ward’s nicely echoed and expanding cover of Buddy Holly’s “Rave On”.  Lucinda Williams duets with War on the stripped, slow-beat “Oh Lonesome Me”, whose carrying power makes it the best ‘meaningful’ song on Hold Time.  Unfortunately, Jason Lytle (of Grandaddy) gets a bit lost in the too pressing “To Save Me”, whose speed makes it a bit muddled.

Click here for photos of M. Ward at 2011 Primavera Sound Festival in Barcelona, Spain in the QRO Concert Photo Gallery

Click here for photos of M. Ward at SXSW 2009 in Austin, TX in the QRO Concert Photo Gallery

Mostly, though, this is Ward’s record, and Ward’s alone (even those pieces mentioned above are really him with someone else, just helping out), and he seems in a good mood – certainly in higher spirits than the ruminating Post-War.  Ward combines laid-back charm with blues-y twang and just the right amount of low-tech echo-fuzz on such tracks as “Jailbird”, “Stars of Leo”, “Fisher of Men”, “Epistemology”, and “Blake’s View”.  Being a solo piece of work, Ward does jam a little too much on the record, whose fourteen tracks include a few nice-but-simple stripped pieces (“One Hundred Million Years”, the Hawaiian “Shangri-La”), some gospel-ish godly material (opener “For Beginners” and the wry-bright “Blake’s View”), a ‘not what he does best’ slow orchestral title track, and a guitar echo-blues instrumental outro.

In the past few years, M. Ward has become something like the ‘Dr. Dre of alt-country/folk’: better known and regarded for his work with others than for his own.  But that experience seems to have enlivened Ward, not drawn him down, and he stands out on Hold Time.