Colson Baker, who goes by stage name Machine Gun Kelly, played to a sold out crowd at Ascend Amphitheater in Nashville.... 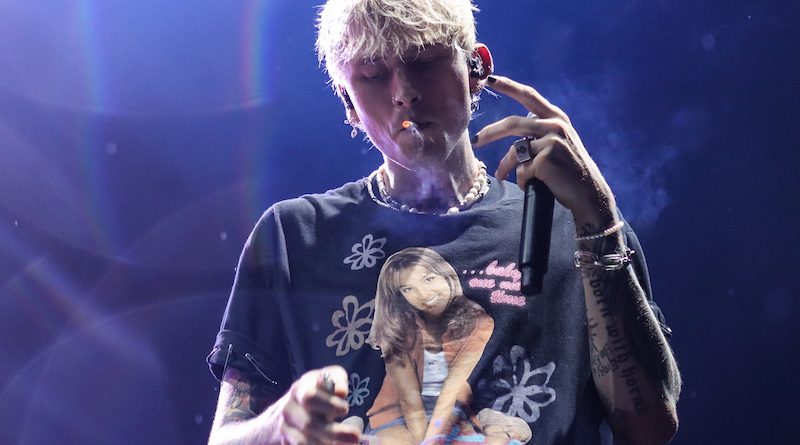 Click here for photos of Machine Gun Kelly at 2021 Music Midtown in Atlanta, GA in the QRO Concert Photo Gallery

Click here for photos of Machine Gun Kelly at 2021 Riot Fest in Chicago, IL in the QRO Concert Photo Gallery

Click here for photos of Machine Gun Kelly at 2017 Lollapalooza in Chicago, IL in the QRO Concert Photo Gallery

Click here for photos of Machine Gun Kelly at SXSW 2012 in Austin, TX in the QRO Concert Photo Gallery

Click here for photos of Machine Gun Kelly at Gramercy Theater in New York, NY on May 22nd, 2011 in the QRO Concert Photo Gallery

Colson Baker, who goes by stage name Machine Gun Kelly, played to a sold out crowd at Ascend Amphitheater on Wednesday, October 6th in Nashville. As the venue filled with screams the second the lights went down, it was no surprise that everyone there was equally excited for live music to be back, and to be in the presence of MGK. Baker slowly rose to the top of a pink prescription pill bottle as he began to sing “Title Track” off of his multi-platinum album, Tickets To My Downfall. It was pretty ironic, as Baker sang, “I sold some tickets to come see my downfall / It sold out in minutes…” to a show that quite literally did sell out in minutes.

He may have begun the show acoustically singing “Title Track”, but that didn’t last for long, as the drums and bass guitars kicked in within seconds, setting the mood for the night. It only went up from there, as MGK proceeded to play hit tracks from “Tickets To My Downfall”, such as “Kiss Kiss” and “Drunk Face”.

MGK began “Nothing Inside”, his collaboration with rapper Iann Dior, onstage but began to make his way through the crowd halfway through the song, heading towards the soundboard. Before you knew it, MGK was climbing on top of the soundboard to finish out the song and give fans a closer look of his vibrant, sparkly pink outfit.

After asking the audience who watched the MTV Video Music Awards, he said that he was going to play a song off of his upcoming record, Born With Horns, and proceeded to play his hit “papercuts”. With sparks coming down during the bridge and MGK slaying on the guitar, this may have been one of the best performances of the night. The crowd’s voices were echoing back to MGK with every word.

“We’re going to play a song we love, but it isn’t ours,” said Baker before beginning his spin on Paramore’s 2008 hit “Misery Business”. He originally just did this cover for fun with Travis Barker (Blink-182) during the COVID-19 lockdown, but ended up adding it as a bonus track on Tickets To My Downfall. This performance had everyone in the crowd jumping and screaming the words at the top of their lungs alongside MGK. He then led into the next song by saying “I’m now going to play a song that none of you know”, then proceeded to sing his smash hit collaboration with blackbear, “My Ex’s Best Friend”. Since no one knew this song in the slightest, because it had only been leading on radio charts for weeks, Baker stepped back and let the crowd sing the majority of the song for him, and they did not miss a beat.

The show then transitioned into Act 2 as MGK’s drummer, who goes by stage name ‘Rook’, had a compelling drum solo before Hotel Diablo opener “Sex Drive” began playing. As “Sex Drive” welcomed the crowd into MGK’s world of Hotel Diablo, a massive skull slowly turned, revealing the singer standing on top of it, as he began his rap portion of the show with “El Diablo”. Flames overtook the stage as the singer transitioned into a mix of “Floor 13” and recent release, “DAYWALKER!”, featuring Corpse Husband. Throwing it back to one of his first albums, MGK then began rapping “Wild Boy”, which was one of his first hit songs. This was by far the most energetic ‘act’ of the show, as every time the crowd was encouraged to jump or scream, they listened, with no doubt.

After doing a remix of fellow rapper Jack Harlow’s “What’s Poppin’”, Baker slowed things down a bit as he sang some songs from his famous ‘Lockdown Sessions,’ covers and songs that he wrote and posted to YouTube during the COVID-19 lockdown. One of these songs was “Pretty Toxic Revolver”, where the crowd was just a sea of floating flashlights; a beautiful sight in the middle of downtown Nashville.

A video then began playing which showed clips of Baker’s father in the hospital, with quotes playing in the background from previous conversations they had had. As Baker returned to the stage with just an acoustic guitar and a stool, he dedicated the next song, “Lonely”, to his late father, who he stated passed last year. The performance was chilling, with smoke emerging from the stage as the crowd recited every word to Baker throughout the emotional song.

Vines floated down onto the stage to begin ‘Act 3’ of the show, as MGK started out with “Banyan Tree”, which originally started as a poem written for Baker by girlfriend Megan Fox. He dedicated the song to her of course, and stated how he wished she could be there with him to see it performed in her hometown. Baker then began his hit “Forget Me Too”, featuring award-winning singer Halsey, and the crowd went wild. Right before Halsey’s part of the song began, Casie Baker, MGK’s daughter, came out on stage to surprise him. The look on his face was priceless, as she sang the remainder of the song with him. “That’s my kid, man!” he exclaimed.

MGK’s ‘Tickets To My Downfall Tour’ has to be one of the best tours of the year, by far. His energy and excitement for what he does is truly unparalleled. Be sure to catch him on one of his remaining dates of the tour, or keep your eyes peeled for 2022 dates announced for the upcoming ‘Born With Horns’ tour!