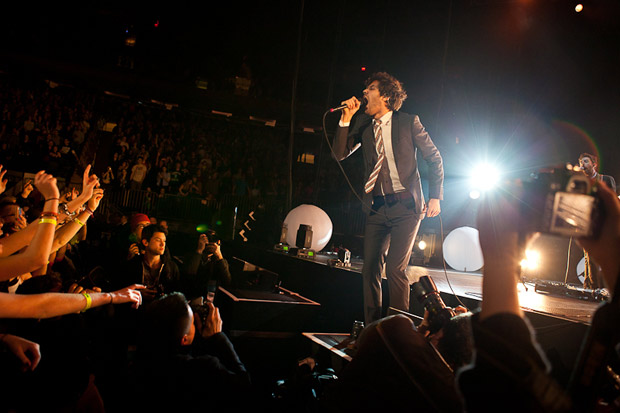 On Friday, February 8th, the northeast was buzzing about ‘Nemo’ – not the captain of the Nautilus or the lost animated fish, but the massive snowstorm hitting that day.  Ever since the Frankenstorm Sandy knocked out power to most of the New York City metropolitan area, storms have been on the mind of folks in these parts – and The Weather Channel took advantage of that by deciding to name snowstorms like hurricanes, despite the rest of the meteorological community completely dismissing the unilateral move (to rank the idea as scientific serious vs. marketing ploy, just see the names TWC chose – Athena, Gandolf, Yogi, Zeus… and Nemo).  Still, the snow was coming down hard, bringing about cancellations from flights to events – but not at Madison Square Garden (QRO venue review), where Passion Pit, Matt & Kim, and Icona Pop ruled the evening.

Click here for photos of Icona Pop at The Paramount in Huntington, NY on December 7th, 2012

Click here for photos of Icona Pop at CMJ 2012 in New York, NY

Admittedly, it was a thin crowd when Swedish female electro duo Icona Pop took the stage at 8:00 PM.  The two separate sections of the pit (front and back) were far from full, and there was only a smattering of fans in the seats surrounding.  It also would be hard for any two people to fill the stage at MSG, but the pair did bring the sound (even if the lights were a little low).  Indeed, their electronic-dance laced with pop was a particularly good fit with the headliner Passion Pit, and those fans that got there early were delighted with set, even if it was only a quite short fifteen minutes. 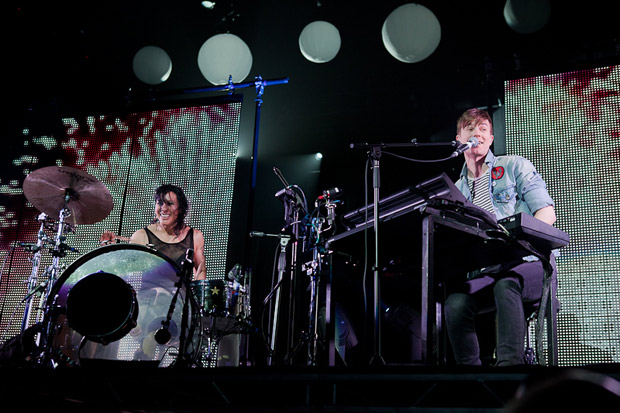 Click here for photos of Matt & Kim at Terminal 5 in New York, NY on November 15th, 2012 in the QRO Concert Photo Gallery

Click here for photos of Matt & Kim at 2012 Catalpa Festival in New York, NY in the QRO Concert Photo Gallery

Click here for all of QRO’s coverage of Matt & Kim in QRO’s ‘Spotlight On : Matt & Kim’ Feature 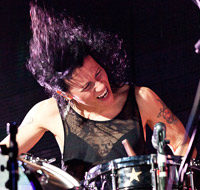 At least the short set also had a short turnover time – just ten minutes after Icona Pop ended, Matt & Kim bounded upon the stage (they know how to change sets at “The World’s Most Famous Arena”…).  Nobody quite makes an entrance like Johnson & Schifino, leaping about to heavy beats before taking their seats – Matt Johnson on keys, Kim Schifino on drums.  Not that they ever stay seated for very long: after opener “Block After Block”, Matt & Kim asked, “Everybody Jump” – to the classic tune. 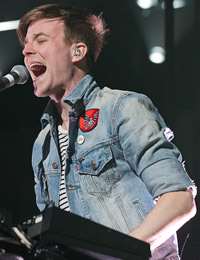 This was the first time Matt and his “partner in crime & partner in sex, Kim” had ever played MSG, and even for an always upbeat & excited act, they were particularly happy this night – Kim let the crowd know that this was the first time she ever wore a thong at a show (and asked that, when people see her, just think the “Thong Song” tune), while Matt attempted to throw a t-shirt into the crowd (and failed – which of course Kim chided him on…). 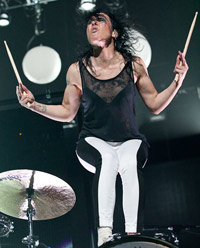 The set was shorter than their usual headline gigs (QRO review), but hit up key numbers from full-lengths Lightning (QRO review), Sidewalks (QRO review), and Grand (QRO review), including singles “Let’s Go”, “Daylight”, and “Lessons Learned” (the one with the video where they got naked ten blocks north in Times Square, almost exactly four years prior to this night).  And yes, Kim went out above the crowd, held aloft by hands while she did shook her ass – despite having a medical boot on one foot because she’d previously injured her ankle (“Don’t walk down stairs and text…”).  It was a suitably exciting performance for the night that both fit the evening and could stand on its own. 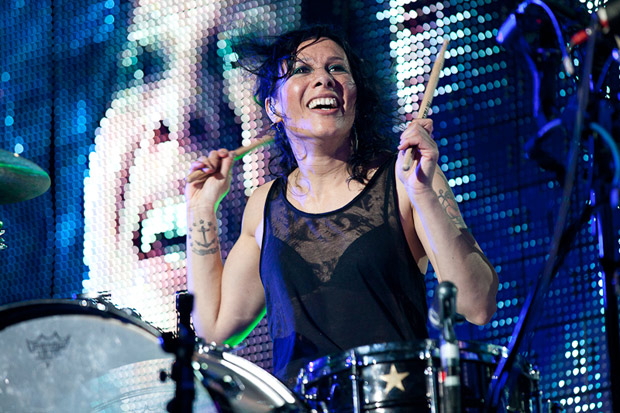 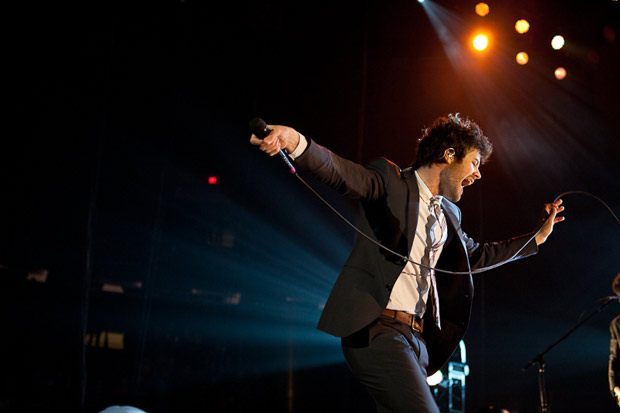 Click here for QRO’s review of Passion Pit at Crystal Ballroom in Portland, OR on December 3rd, 2012

Click here for photos of Passion Pit at The Backyard in Austin, TX on September 15th, 2012

Click here for QRO’s review of Passion Pit at Bank of America Pavilion in Boston, MA on June 22nd, 2012

Click here for photos of Passion Pit at 2011 Moogfest in Asheville, NC

Click here for photos of Passion Pit at The Ritz in Ybor City, FL on June 14th, 2010

Click here for photos of Passion Pit at Terminal 5 in New York, NY on January 9th, 2010

Click here for photos of Passion Pit at SXSW 2009 in Austin, TX

But the main event was Passion Pit.  For any band, headlining Madison Square Garden is pretty much the highest they can get – but it was especially special for Passion Pit.  The college boys from Cambridge (all attended the prestigious Berklee College of Music save Emerson singer Michael Angelakos) have seen things get very big very fast – 2008 single “Sleepyhead” caught everyone’s ears, and debut full-length Manners (QRO review) was a major hit, getting them to major label Columbia among other things.  Their upbeat electronica spawned numerous imitators, but the group returned in force last summer with great follow-up Gossamer (QRO review).  However, the subsequent Gossamer tour was cancelled due to Angelakos seeking treatment for bipolar disorder.  But you can’t keep a good band down – Passion Pit played Saturday Night Live last fall (QRO Indie On Late Night TV), and now was playing their biggest stage ever.

As Angelakos exclaimed at one point during the night, “They told me I could never tour again.  And now we’re here at Madison Square fuckin’ Garden!…”

The set list mixed and matched from Gossamer and Manners, starting off particularly strong with Gossamer’s “I’ll Be Alright” and Manners’ “The Reeling” – two great singles from those albums that weren’t ‘the single’ from either album.  Both full-lengths do suffer somewhat from being in the shadow of their amazing first singles, but this was a night where Passion Pit showed the breadth of their work, as well as depth.  “Carried Away” (Gossamer), “Moth’s Wings” (Manners), and “Love Is Greed” (Gossamer) also proved themselves mightily in the early going, while the back half had Manners’ “To Kingdom Come” and Gossamer’s amazing, “Take a Walk” (QRO review).

“Walk” was the first single from Gossamer and is also the leadoff track, so was effectively bringing Passion Pit back – at the top of their game.  High and uplifting like Passion Pit is, it is interesting to note the lyrics, which are an immigrant’s song of moving up in this new land, America – only to lose it in the quintessentially American way of over-borrowing and bad investments.  There’s even a line, “Once I was outside Penn Station / Selling red and white carnations” – Penn Station being connected directly to Madison Square fuckin’ Garden itself (though it’s doubtful that even the hardest working of immigrants were outside selling flowers that night).  The evening ended with Manners’ “Little Secrets” taking the crowd “higher and higher,” but of course Passion Pit returned (“I want to do this right”) with “Sleepyhead” to close out the night. 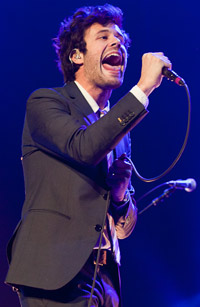 Despite ‘Nemo’ raging outside, Madison Square Garden was full for Passion Pit’s sold-out show.  There were surely some who couldn’t make it that night, and the next stop on the tour, Saturday night in Boston, was postponed, as New England was getting it much worse – but only put off one night, to Sunday, at another massive space, Boston University’s Agannis Arena.  That should be particularly special for Massachusetts’ Passion Pit (Berklee holds ceremonies there), but there’s nothing like Madison Square Garden – and there was nothing like this night at The Garden. 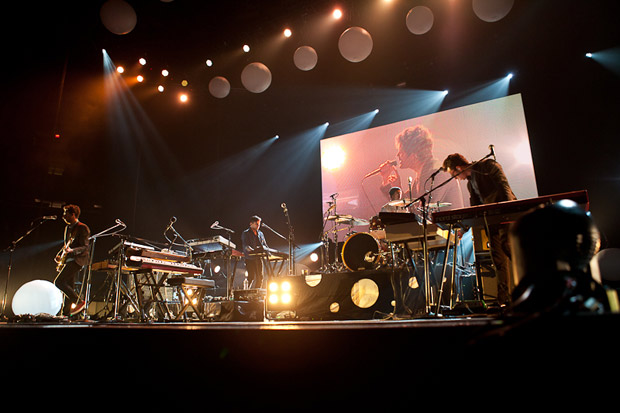 Esben & The Witch – Wash the Sins Not Only the Face