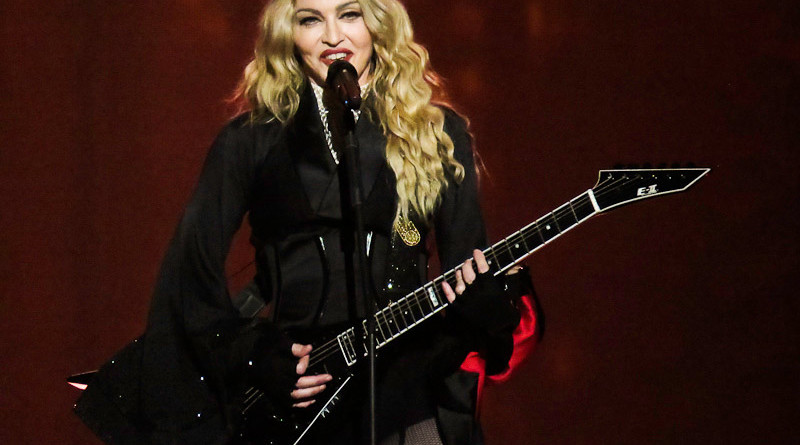 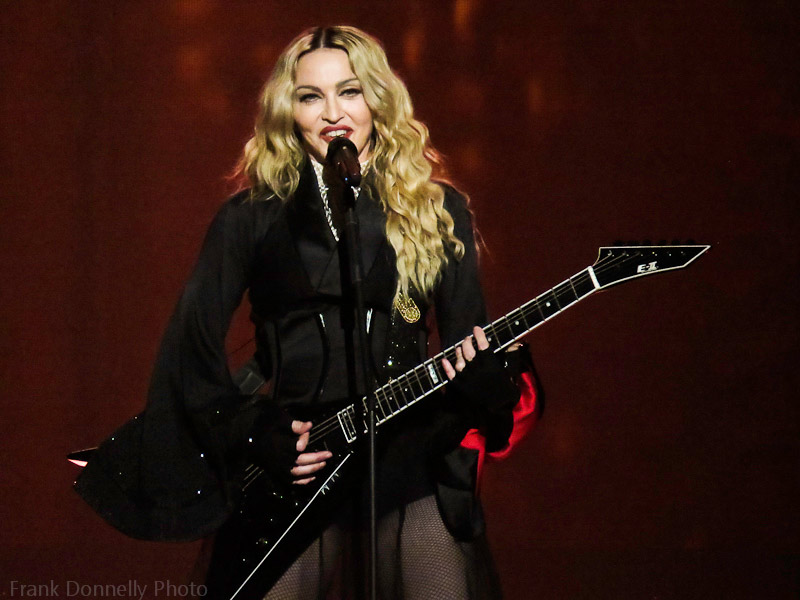 As a habitual regular live music goer since my teenage years, Boston Garden on Saturday, September 26th, was my first time to see the iconic, legendary pop queen Madonna in concert. The ‘Rebel Heart’ Tour was finally making its way around the U.S. after postponement for production changes earlier in the year. I truly had no idea exactly what to expect and at the same time could imagine I was going to see a full on choreographed assault on the senses, with religious and sexual imagery combined provocatively in an all singing and dancing stage production. This was once seen as shocking and edgy and did much to propel Madonna to notoriety in the ‘80s and ‘90s, but to quote the old Replacements line, “Shocking how nothing shocks any more.” 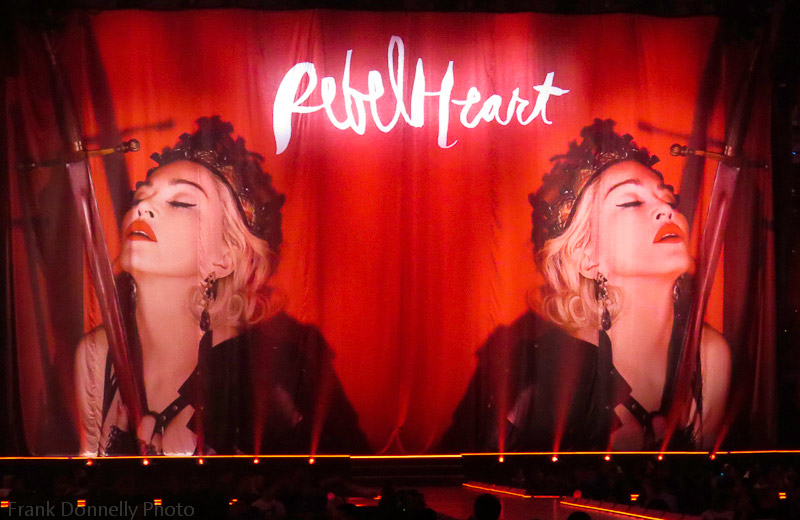 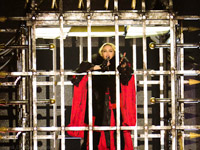 As a female artist, Madonna has surely blazed a trail and been braver than most during her 30-plus year career. She can still sell out arenas with average ticket prices well over $200 and this night in Boston was no exception. So the lights went down on the packed arena and a troop of dancer’s dressed like armed guards from a Pharaoh’s tomb marched on stage holding giant steel poles with a crucifix on top. Much ominous militaristic stomping and drama took place with a backdrop of a video montage of Madonna in various tempestuous poses. Video footage of Mike Tyson heralded the arrival of the megastar singing “Iconic” inside a gilded cage being lowered down from the roof of the stage. Before you know it, the cage landed and Madonna joined her crucifix wielding boys running around the stage in a long flowing shiny frock coat. She walked, ran, strutted and was held aloft, even bat-like upside down at one point – all the while, singing un-interrupted. No mean feat for someone even at the start of their career. 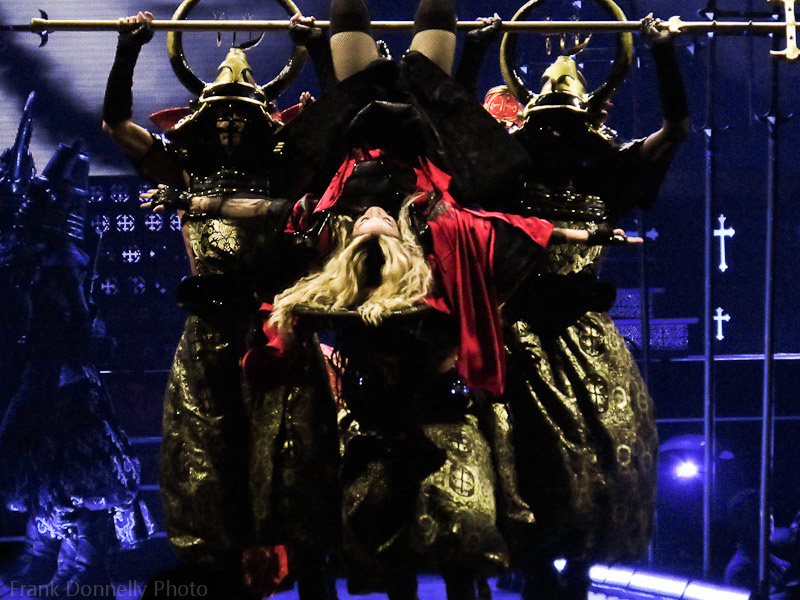 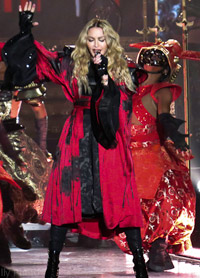 It was quickly evident that the evening wasn’t just about seeing Madonna in concert. This was essentially of a musical stage production in an arena. There wasn’t much visual emphasis on how the music is made, with a band tucked away in one corner of the stage, sometimes visible – sometimes not. Madonna has much greater interaction with her dancers than anything. Sometimes she has a microphone, sometimes not. I really very much doubt any of that bothers the majority of her adoring fans either.

While shedding most of the lower half her clothing Madonna exclaimed, “You didn’t think I was going to keep all my clothes on, did ya?” to predictable applause and cheering. Much of the banter was generic ‘how are you guys doing?’ type of fare. For “Burning Up”, she ventured in the middle of the arena floor on the crucifix shaped walkway playing an electric guitar which looked more suited to Metallica. In the near two-hour set Madonna managed frequent costume changes, as did her ensemble of dancers, from naughty nuns swinging from poles during “Holy Water”, which pushed hard on the borders of blasphemy, to the more Grease-like ‘50s retro of “Body Shop”. 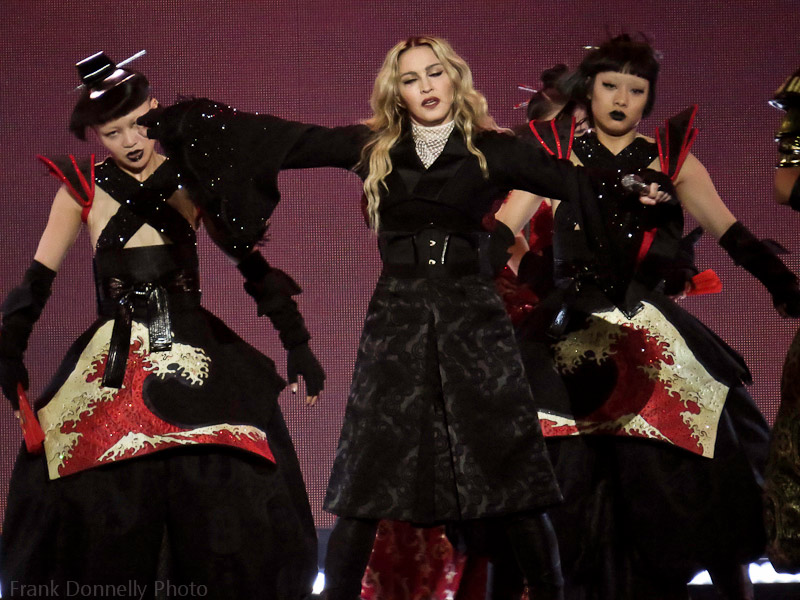 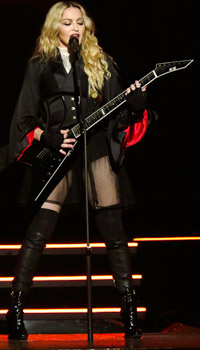 The set wasn’t just a greatest hits affair, and some of her better known songs such as “Like a Virgin” were re-arranged in a more talking style, bearing little likeness to the original. The stripped down rendition “True Blue” was probably the most simple and musically honest moment of the whole extravaganza, as Madonna sang sitting on a stack of tires strumming a ukulele. The acoustic theme was revived again for “Who’s That Girl”, which became a mass sing-along. These were the moments of the show that were probably more likely to stay with fans on later recollection as the singer seemed to make a more personal connection. Next we were treated to a very messy medley of “Dress You Up”, which segued into abbreviated versions “Starlight” and “Into the Groove” sung over a watered down Buena Vista Social Club-style backing.

The last section of show was a mixed bag of earlier hits and more recent, dare I say, misses. There was a somewhat bizarre nod to Cirque du Soleil in the form of people suspended on poles being swung back and forth over the audience in time to the music of “Illuminati”. This made way for Madonna in a bowler hat sporting a sparkly flapper dress while singing “Music” and “Candy Store” into “Material Girl”. The evening drew to a close with a bit of a free for all of dancers in assorted international attire during “Holiday”. At the climax of this, the star of the show was lifted to the heavens on wires as a large screen popped up at the front of the stage to distract from her descent to exit the stage. Distraction seemed to be a recurring theme in a show which really was a soup of disconnected imagery and songs all too often frustratingly presented in medley format with many of her best tunes missing completely. The masses were entertained, but I can’t help thinking the more discerning music lover might come away from it feeling cold from all the smoke, mirrors, dancers and overall lack of emphasis on the songs themselves. 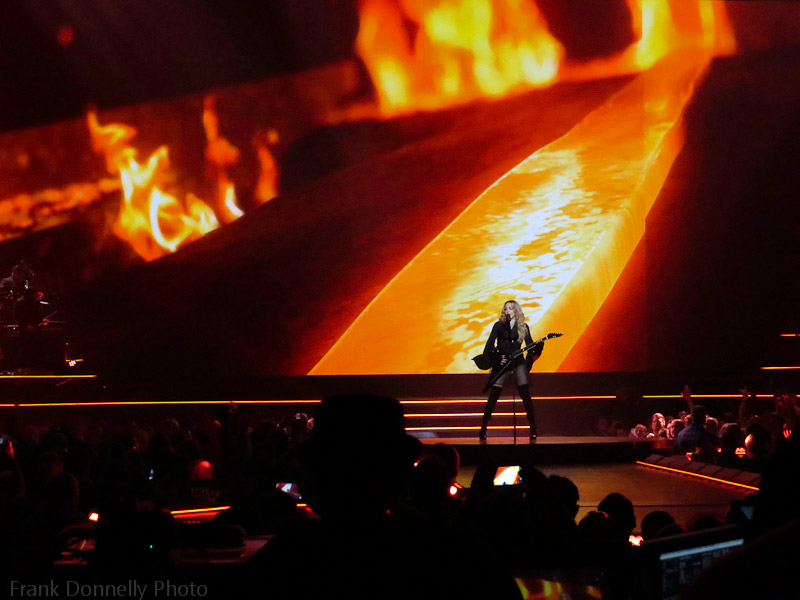