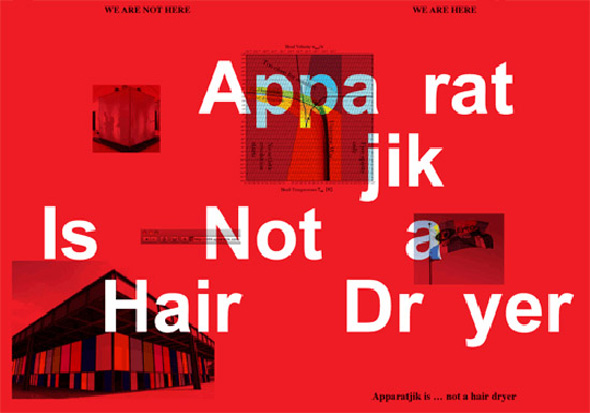 Last year, when Apparatjik’s debut LP, We Are Here (QRO review) was released worldwide, more interest was given to the makeup of this unusual supergroup, rather than what was actually on the album.  Comprised of four successful musicians, Jonas Bjerre (lead singer of Mew – QRO live review), Magne Furuholmen (keyboardist of a-ha – QRO live review), Guy Berryman (bassist of Coldplay – QRO album review), and Martin Terefe (one of the top 10 producers of hits on the Billboard Hot 100 Charts), few have wondered – how long could this ‘side project’ go on before they return to their ‘day jobs’?  Well, except for Furuholmen – since a-ha has officially retired on their 25th anniversary with a yearlong tour around the world last year.

While Apparatjik’s electro-pop songs don’t break any new grounds, their debut performance at Transmediale in Berlin last year was definitely unconventional by pop music standards.  The four musicians performed inside a cube, while digital images gracing the exterior confronted the crowd.  While many bands utilize projections during their shows, Apparatjik’s approach bended the conventional space of stage, causing shift in time and motion of a traditional concert going experience.

In an effort to spread the word about Apparatjik’s upcoming series of performances and exhibition at the Nationalgalerie in Berlin this month, QRO came up with few questions to wrap our heads around this enigmatic collective.  And following are answers sent via email by Magne Furuholmen (Magne A – the members of Apparatjik all have the last initial of A).

QRO: How did the four musicians come together to form Apparatjik?

Magne A: In this universion, Apparatjik formed for the purpose of supporting Bruce Parry’s ‘tribes project’ for Survival International (a fundraising album, Amazon – Tribe – Songs for Survival, in which Apparatjik contributed with a song, "Ferreting").  About four months later we met up for an ill-fated skiing trip, damn near killing Jonas and putting the rest of us to shame.  This turned into an impromptu recording session the likes of which none of us has ever experienced.  In another version we have not even met yet.

MA: The manifesto is changing, but key to the Apparatjik spirit is that we do not allow ourselves to be negative to each other’s input, and there should always be plenty of room for error.

QRO: Why is it critical that there is no alpha male in Apparatjik?

MA: Incorrect info – on the contrary, Apparatjik has four alpha males all sucking on estrogen to become better collaborators and to avoid prostate cancer.

MA: Magne A sings on "A Quiet corner".  He also sings on busy corners, on occasion.  Everyone in Apparatjik sings everywhere.  All songs are amalgamations.  As for lead vocals, Guy A sings on "Electric Eye" and Martin A on "Supersonic Sound".  You know you wanted to know.

QRO: Does Max Tegmark (a cosmologist and professor of physics at MIT, sited as Apparatjik’s hero) know of Apparatjik?

MA: Max Tegmark is to Apparatjik what Ron. L. Hubbard never was to the scientologists.  He not only knows of Apparatjik but has met Apparatjiks on various occasions.  Through Max we become Apparatjik, through Apparatjik Max Tegmark becomes a star.

QRO: Have you guys all had interest in quantum theory before the formation of this group?

QRO: How did the invitation from Nationalgalerie Berlin come about, and what is your role in this event?

MA: A lot of voodoo was involved.  And persuasion.  And begging.  And bribery.  But finally we gave in.

QRO: How will the performance for Light Space Modulator differ from the last year’s debut at the Club Transmission?

MA: The performance at the Transmediale was our first.  Back then we did not need to discipline ourselves to behave amateurishly – it came naturally.  Now we are in danger of becoming professional, so we have taken steps to revert this process.  It will be different.  There is no undo button.

QRO: I understand that there will be a comprehensive documentation of this project.  In what format will this be?

MA:  Books, limited editions, DVD, CD, vinyl, poster, box, a fashion line – send your preferred choice to outland/ZIM3010.com.  There will also be an olfactory documentation in the form of a perfume titled "The Sweet Smell of Success" and a memory bank.

QRO: Has Apparatjik evolved from its original idea?

MA: Everything evolves, but some things evolve organically.  We do not.
We are mutating faster than even epigenetics allow.  We are like a benign form of cancer: out of control, but not hurting anyone.

QRO: How vital is the fan/audience participation in the existence of Apparatjik?

MA:  Everyone is an Apparatjik!

Apparatjik has been invited by the Nationalgalerie Berlin to present the collective’s first large-scale project in Germany in March 2011.

Apparatjik is a trans-disciplinary working collective founded in 2008 by four world-renowned musicians: Apparatjik functions as an experimental platform and collaborates with a pool of artists, media technicians, and designers, as well as scientists such as Astrophysics Professor Max Tegmark of the Massachusetts Institute of Technology (MIT) and curator and Associate Professor Ute Meta Bauer, Head of the MIT Program in Art, Culture and Technology.

The Apparatjik Light Space Modulator consists of an installation and three audiovisual performances presented in the glass hall of the Neue Nationalgalerie, and is inspired by the visual experiments of Bauhaus professor László Moholy-Nagy.  Both the installation and performances feature moving images that project from a large scale cube into the open glass structure of the building into the city space, a reference to the Moholy-Nagy’s kinetic Licht-Raum-Modulator created in 1930.

The Apparatjik Light Space Modulator incorporates low-res retro-futuristic visuals, gonzo-pop, randomness and pseudo-science, dada-esque humor, and fashion, in a celebration of convergence culture.  Apparatjik’s blend of popular culture and playful references to art history places them in a space somewhere between art and entertainment.  Last but not least, this project by Apparatjik is to be understood as homage to the legendary Meta-Musik-Festival that took place during the seventies at the Neue Nationalgalerie Berlin.

Apparatjik’s project will conclude on March 27 with a special interactive composition performed in collaboration with the Deutsches Kammerorchester and dedicated to Bauhaus artist Mies van der Rohe on the occasion of the 125th anniversary of his birth.  Van der Rohe was the architect of the Neue Nationalgalerie Berlin.

The Apparatjik Light Space Modulator will be accompanied by a publication in collaboration with NODE Berlin Oslo to be published in late 2011 including a comprehensive documentation of this project.