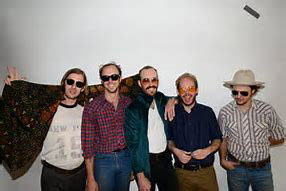 This is fine, and it is hard to find a band like them outside maybe Australia’s Spookyland, but it creates a gap in the feel of the slow songs on previously released LP, Planet Gates, such as the enigmatic lead guitar in “Best I Can” or “Oh, Jamie” to the tracks like single “Magnolia”, Planet Gates numbers “Fool the Fire” or “Dorothy”, or new singles, “Sweet Red Lies” and “Throw Shade”. Somehow “Lies” does shine as an emotional jam, while still bringing a psychedelic feel, but where does this jam lead for the band overall? The vibe is nice and slightly jumpy folk, and the vocals are edgy, it just tends to get lost in the mellow.

Of the two singles, this is is easily the better one as “Throw Shade” is more pure Americana playing into the previously mentioned gap on the Americana versus jam band folly.

Mail the Horse, can make it work, but the guitar is too general here to be anything more than person to person appealing. “Secret Red Lies” is more promising while not overwhelming, tantalizing, but muted, a good start to a new more rock and happy self titled album hopefully for both new Mail the Horse songs.