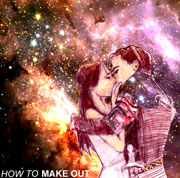 If Kim Wilde’s 1980s anthem "Kids of America" was written after Hole (QRO album review) had formed, MAKE OUT’s "What U Doin’ Later" would be the copy cat hit.  The second song off their three-track debut EP How To is a rip off a cult classic that found new momentum in the mid-90s when The Muff’s cover made it onto the Clueless soundtrack.  Now, safely veiled by an air of nostalgia in a never-ending trend of remakes, MAKE OUT is a stone’s throw back into the ‘90s when riotgrrl was ultra cool and little girls still were pretending to be Jem and Holograms.

That’s not to say MAKE OUT isn’t fun… if anything, that’s definite.  MAKE OUT opened for New York Dolls (QRO photos) recently at the Bowery Ballroom (QRO venue review), and have proven to a growing audience that their on-stage dynamic is rock ‘n’ roll and the lead singer is a pretty, screaming girl.  Sometimes that’s all it takes.

MP3 Stream: "I Don’t Want Anybody That Wants Me"