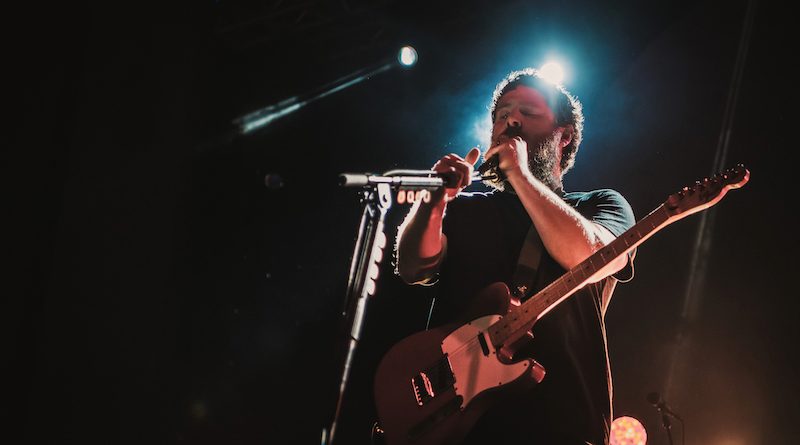 On a breezy Sunday night, October 10th in Tampa Bay, indie rock band Manchester Orchestra brought their sold out show to Jannus Live in downtown St. Petersburg, Florida. Celebrating their newest album of the same name (QRO review), the band was joined by other rock groups Slothrust and Foxing for ‘The Million Masks of God 2021 tour’. The night was set for an exuberant show with the pit filled with fans of all ages.

The first opener of the night, coming from Boston, Massachusetts, was a small, three piece alt-rock band called Slothrust, made up of Leah Wellbaum on vocals and guitars, Kyle Bann on bass, and Will Gorin on drums. The band first got their start when Gorin and Wellbaum began collaborating as students at Sarah Lawrence College, and soon added Bann to the roster before officially forming. They released their debut studio album in 2012 titled Feels Your Pain, and gained a following when the hit single “7:30 AM” from their debut album was used as an opening theme for FX’s series You’re The Worst. Following this album, they released four more full length albums, with 2018’s The Pact reaching 11th on the Billboard Magazine’s “Top Heatseekers”.

Under the glow of a blue and neon green light, the trio walked onto stage with confidence. Without wasting a breath, the band got straight into their set, with Gorin going heavy on the drums while Bann strummed away on the bass. Wellbaum first started out on the microphone before moving to the middle of the stage to shred off notes on her guitar while thrusting her hips along with the beat. After a short and sweet set, the Wellbaum got the crowd excited for the next rock stars in line.

Following Slothrust was St. Louis, Missouri’s indie rock band Foxing. The band currently consists of Conor Murphy on vocals, Jon Hellwig on drums, and Eric Hudson on guitar. The band released their EP Old Songs in 2012 followed by their debut studio album The Albatross in 2013. This was then followed by three more full length albums and several singles. The band first formed in 2011 following the end of indie group Hunter Gatherer, and has gone through several line-up changes since. After touring with other big name alt-rock/indie-rock bands such as Brand New and Modern Baseball, the group was ready and proved it with their eager entrance to the stage.

Opening under the dim-lit glow of the red stage lights, Murphy immediately grabbed the mic from the stand and started right in the first song, as he began to jump and move about the stage in a fervor. With the rest of the band joining in on the action, they soon all moved together as they rocked out, while Murphy began to wrap up the microphone cable and pull it across himself as he sang. Finishing out their set, the band waved goodbye as they set off the stage for preparation of the headliner.

Click here for photos of Manchester Orchestra at Ryman Auditorium in Nashville, TN on November 25th, 2018 in the QRO Concert Photo Gallery

Click here for photos of Manchester Orchestra at 2018 Boston Calling in Boston, MA in the QRO Concert Photo Gallery

Click here for photos of Manchester Orchestra at 2017 Pandora Chicago Invasion in Chicago, IL in the QRO Concert Photo Gallery

Click here for photos of Manchester Orchestra at 2015 Shaky Knees Festival in Atlanta, GA in the QRO Concert Photo Gallery

Click here for photos of Manchester Orchestra at 2014 Lollapalooza in Chicago, IL in the QRO Concert Photo Gallery

Click here for photos of Manchester Orchestra at Terminal 5 in New York, NY on May 22nd, 2014 in the QRO Concert Photo Gallery

Click here for photos of Manchester Orchestra at Terminal 5 on May 11th, 2011 in the QRO Concert Photo Gallery

Manchester Orchestra first formed in 2005 in Atlanta, Georgia, and has had a long history since. On the current roster is Andy Hull on lead vocals and guitar, Robert McDowell on lead guitar, keyboards and backup vocals, Tim Very on drums, Andy Prince on bass guitar, and Brooks Tipton on piano as a touring member. The band released their first EP 5 Stories in 2005 and their first full length album in 2006 titled I’m Like a Virgin Losing a Child (QRO review). The band later released five more studio length albums with the newest one, The Million Masks of God, in April of 2021.

With the lights dimmed and the back lights on, the band emerged as silhouettes in the darkness as they started into their first song, “Inaudible”, from the newest album. With a soft piano in the background provided by Tipton, Hull got straight into the vocals as the crowd cried out in joy. With the backlighting on the band, the group stood as ethereal figures on the stage as they played through their set. After performing several songs from their newest album, the band then began to take it back a few years with some heavy hits from 2017’s A Black Mile To The Surface (QRO review) and 2013’s Cope (QRO review). Without wasting any time, the band went through their set as they neared the end, with Hull heavy on the vocals, McDowell ripping on his guitar, Very beating on the drums, Prince feathering the bass, and Tipton gracefully keying the piano.

Moving towards the end of their main set, all but Hull exited the stage as he soloed an acoustic cover of Telepath from the latest album. Hull soon left the stage for a brief moment, while the crowd chanted “One more song!” soon changing to “Two more songs!” over and over. Emerging from the black for an encore, and listening to the chants of their fans, the band got right into their hit song “Shake It Out” from 2009’s Mean Everything To Nothing (QRO review). With the entire crowd singing along, the band unleashed everything as Hull’s iconic harsh vocals from the song rang out into the night. For the final piece of the encore, the band played out “The Silence” from the newest album and ended the set triumphantly, sending their fans home with their wishes fulfilled and their voices wrung out.

The Vaccines – Back In Love City