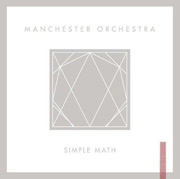 Despite coming up in the alternative music world, Manchester Orchestra always seemed both too hard and too emotional for the indie-sphere.  Singer/songwriter Andy Hull’s southern rock was too mainstream, and the band embraced it on 2009’s Mean Everything To Nothing (QRO review).  With Simple Math, the Atlanta-based outfit have taken that equation and improved upon it, filling in their bigger sound.

Click here for photos of Manchester Orchestra at Terminal 5 in New York, NY on May 11th, 2011 in the QRO Concert Photo Gallery

Click here for QRO’s review of Manchester Orchestra at a special preview show at Mercury Lounge in New York, NY on March 4th, 2009

Unlike the front-loaded Nothing, Math is an evener collection, but can correspondingly lack on standouts, even for a superior and more varied album.  Still, single “Virgin” is a perfect epic grind, the kind that all heavy bands should aspire to, and includes a children’s choir (as the band did when they played it on Letterman – QRO Indie On Late Night TV).  And “Pensacola” does the Florida panhandle right with this excellent, kind of frantic push to the rhythm and vocals, contrastingly nicely with the breakdown chorus.

Most of Math consists of harder fare, like “Virgin”, “Mighty” and “April Fool”, but there are also slow sways, from opener “Deer” to closer “Leaky Breaks”.  The harder material has a greater upside, like “Virgin”, or the staccato guitar grind to “Might”, but also can get forgettable when it doesn’t have something special, such as “Pale Black Eye”.  And the strings to “Leave It Alone” don’t add as much as one would hope.  But the bigger size to Manchester’s sound gets more of an emotional backing.

Manchester Orchestra are currently playing their biggest venues to date (QRO photos), and Simple Math is seeing them fill not just the physical spaces, but also the sonic ones.