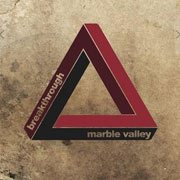 Three years after their brilliant Slash & Laugh, they’re now back with Breakthrough, which carries on in the same direction of solid songwriting and laidback-feel-good attitude, but somehow is their most cohesive effort to date.  In good Marble Valley tradition, expect catchy hooks you want to have a beer (or maybe a few…) to, and West’s characteristic deadpan approach to silliness.

Conceived across five continents, the album had a long, unconventional gestation: the band got together in Amsterdam over a weekend last year and gathered a few ideas.  West then re-elaborated them while touring with Pavement, and Breakthrough was finally recorded at Schouten’s studio in Amsterdam.

The album opens with the lo-fi "Art Pistol" and its feedback fuzzed guitars, dissonant riffs, subtle pottering keyboards and interesting percussion.  The soft-rock "Wildlife Free-Zone" showcases slacker harmonies and a lyrical rhythm totally borrowed from Pavement "Stereo" (remember the line, "What about the voice of Geddy Lee?").

That Marble Valley members are all from different countries (West lives in Lexington, VA, Schouten and Beige in Amsterdam and Andy James and Carl in Hull, U.K.) with different backgrounds is evident in their eclectic music: some songs like "The Dan Map Experience" have a bit of Super Furry Animals-style eclectic psychedelia, others an alt-country Americana vibe, there are even hints of The Specials kind of ska ("Crickey Lane" reminds of "Ghost Town") and bluegrass.

Highlights of the albums are the synth-led "We Roll", a catchy indie-rock anthem, "Good Life" with its combination of minimalist melodies, rousing vocals and chanting along chorus, and "Never", a lovely laidback ballad with West’s vocals at their best and a funny middle section freak-out.

Some other songs are a bit more predictable like the oddly Interpol (QRO live review)-esque "Siberian Bride" or "Tokyo Hands", probably the weakest track of the album.

Breakthrough is not going to change anything in Music History, but with its wacky rhythms, slacker harmonies and hum along vocals is certainly going to entertain you for forty minutes and more importantly leave you with a stoned smile on your face.