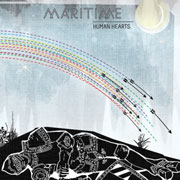 For fans of Maritime’s previous album Heresy and the Hotel Choir, this latest release is arguably the band’s best yet.  Adopting the New Wave revival hinted at previously on songs like "Pearl", Human Hearts takes that classic ’80s sound and runs with it.

And it works.  Even after considering how long The Promise Ring and The Dismemberment Plan have been broken up, the singing, bass, and drums are still up to snuff with what remnants of those bands are left, but it’s the guitar work that really stands out here.  Davey von Bohlen’s playing flawlessly brings people back to the days when The Police and The Smiths were just starting to get their groove.  It rings true of what made the New Wave movement of the 80s so great in the first place without delving into the cheesier glam moments the period has become known for.

The opener "It’s Casual" clearly sets the stage for rest of the album, drawing in listeners with its sharp, bouncy opening layered under a heavily distorted chorus riff that evokes Andy Summers’ recurrent use of echoing reverberated chords to guide the song along.  That solid reverb-guided sound never lets up either, and is in fact featured much more prominently in the following tracks "Paraphernalia" and "Black Bones".  Even quieter, more relaxed tracks like "Faint of Hearts" still work wonderfully with more catchy choruses to keep audiences entertained.

The only significant complaint to be had from Human Hearts is its relatively short 35-minute length, which is also somewhat hindered by many of the songs sounding fairly similar.  Granted, this works to the album’s advantage as well.  An extra 10 to 15 minutes of the same thing could reasonably get rather annoying.

Human Hearts truly works as a reminder that the 80s really did offer interesting music that didn’t involve cheesy sexual innuendos or enough hairspray to be deemed a fire hazard.  This is a solid record that both fans of Maritime and ’80s New Wave revivalists alike will enjoy from start to finish.