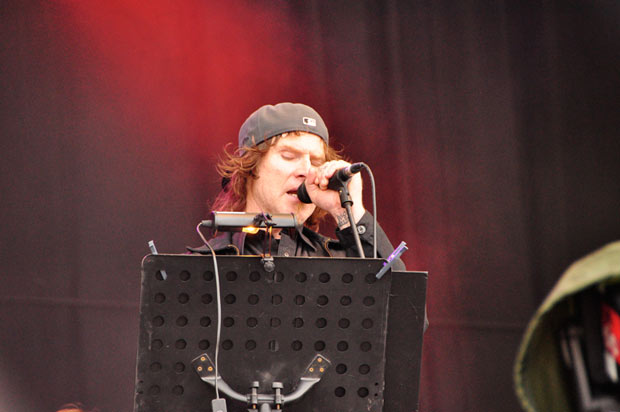 If you were to mention Lanegan’s name in a discussion about rock music, you’d generally find the response of either ‘who?’ or a complete exclamation of love and adoration.  It was pretty clear from the Wednesday, August 18th show at London’s Union Chapel that the latter had gather in almost a celebration of Mark Lanegan’s talent.

Lanegan’s reputation precedes him, rising to ‘sub fame’ through the grunge movement in the 1980’s through to 1990’s, with heavy involvement with infamous bands such as Nirvana and Soundgarden.  Despite not receiving the same commercial recognition that many of the bands of this movement, Mark Lanegan still planted the seeds at this time for an intense career in rock – gracing Queens of the Stone Age for a five-year stint and collaborating with Greg Dulli creating the Gutter Twins – and the start of an avid consuming fanship.

Given Lanegan’s history, one would expect some kind of hardcore rock ‘n’ roll show – but what Lanegan in fact showcased was actually somewhat removed from the suggestion that he should be oozing sex, drugs, and rock ‘n’ roll in a brash and apparent manner.  However, that is not the case – not at least in terms of delivery.  Lanegan delivers both vocally and through stance with a potent sense of effortless masculinity.  Simply based on tone and delivery, Lanegan shone through with gruff voice filled with age, hurt and broken memories- and probably one too many whiskies.

Tonight was Langegan’s second visit to the Union Chapel after playing a show last year with Dulli as the Gutter Twins.  Tonight, however, was a prime example yet again to authenticate what a multifaceted, talented man Lanegan truly is.  Accompanied by a David Rosser strumming single electric guitar, Lanegan launched without hesitation into an unplugged style set, effortlessly crooning his way through material from his debut releases – as well as the addition of numerous Screaming Trees tracks, much to the crowd’s delight.

Although a completely sold out show, with many fans scalping for tickets prior to the show outside the venue and online, it was clear that all were in attendance to experience the musical spectacle – almost a rare occasion at a concert in an age where popularity of live shows is increasing to the general public.  Every single song of the night was played to a complete silent crowd, avidly listening – with the only occasional sound echoing through the church being a shuffle of a foot, or a shutter of a camera.

However, it was a different case between songs – as the audience became almost raucous, with the stamping of feet, roaring applause, shouts and yelps from the crowd, with of course the obligatory “I LOVE YOU MARK!” – most notable after “Like Little Willie John”, a true fan favourite.  As much as the relatively low key sounds of Lanegan did suit the setting, a candlelit church is perhaps not the place you would deem most likely from such an animated spectacle from the crowd themselves.  As the show progressed, the audience became increasingly involved in the show as both Lanegan and Rosser expanded their set, with growing harmonies between the two men.  The use of an electric guitar rather than an acoustic guitar added a differing dimension to previous shows of Lanegan’s, and facilitated tracks such as “Hit the City” – a more guitar-heavy track embraced in it’s natural form rather than it’s exclusion at previous shows (much to the disappoint of some).

Lanegan’s voice remains to be one of the most unique and outstanding in the music industry.  Almost like a close-to-baritone Axl Rose – without the idiocy, but with added emotion.  Tonight’s show demonstrated how Lanegan may appear rough, but is indeed a musical diamond, with a developed complex voice which is versatile to multiple genres – which was clearly affirmed by songs varying in style tonight – some with more country undertones, others more classically rock, but all with a robust melodic basis.

In addition to the increasing involvement from Lanegan and the audience, towards the latter part of the set, Rosser included the use of the church organ, adding a truly majestic and wholly appropriate element to the show- and with solid acoustic provided by the venue, a striking and a powerful show was rounded off.  Closing to a loud, enthusiastic standing ovation, it was clear to see for many, this wasn’t a gig to be forgotten, but for some, certainly one of many gone and for many, the first of more to come.  Lanegan seems to have attracted a loyal, enamored fanbase, and with a voice that speaks on so many levels, it’s clear to see why.