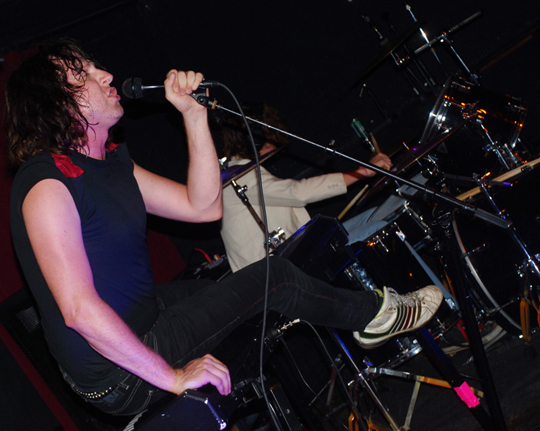 Click here for photos of Mark Mallman at 2012 80/35 Festival in Des Moines, IA in the QRO Concert Photo Gallery

It’s no secret that New York City ain’t the most welcoming of places, the words of The Statue of Liberty notwithstanding, and the same is true in indie-rock.  It isn’t just the judgmental, über-hipster crowds, but that, in New York, one has so many options on any given night.  For instance, on Wednesday, September 23rd, there was Yeah Yeah Yeahs (QRO album review) at Radio City Music Hall (QRO venue review), Moby playing the small (for him) Music Hall in Williamsburg (QRO venue review), a free show on Central Park’s East Meadow to celebrate America’s national parks, She Wants Revenge (QRO photos)/Kill Hannah (QRO photos)/Paper Route (QRO photos), the second night of Snow Patrol (QRO album review), and more – 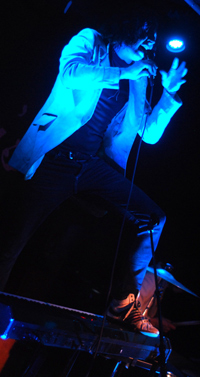 Playing to a “not a stadium-sized crowd”, Mallman didn’t ignore the fact, but made light of it.  Joking about his song, “You’re Never Alone in New York”, he said he should add, “unless you’re at a Mark Mallman show…”  He said his lights, shining right down – and up – on him weren’t just there to make the show better, but “so I can’t see out into the crowd – or lack of crowd…”  At least he didn’t have to face the crowd being fewer in number than the band, since it was just him & drummer Aaron (“I’m going to be honest with you … He’s a pain in the ass…”).  But Mallman used humor well, not just in joking about the size of the crowd, or even his drummer (told a hilarious story of Aaron telling Mallman, because he [Mallman] is so crazy, they should do songs like “Crazy Killer Fuckin’ Guy Who Murders & Dismembers His Relatives” – “Aaron, that’s not even a song…”), but in telling his drummer to tell the crowd that he can’t go on, “This is the last show ever“, or, after a long moment of silence, replying to an off-mike Aaron, “I don’t feel awkward – they might…” 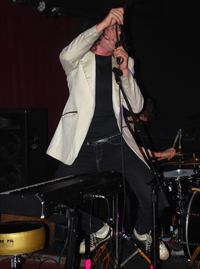 But another factor not helping Mallman was Fontana’s (QRO venue review).  A sub-par venue – so sub-par it isn’t even in Bowery area, but south of Delancey – the basement is a dingy T-shaped set up, with the band in the horizontal top, playing to the crowd in the vertical line, which wedges much of the crowd either up too close to the stage for one’s liking, or stuck behind people in the middle.  Mallman likely brought his own lights, because Fontana’s doesn’t have many in the way of freestanding ones.  And the Coors Light on tap at the bar (all the way at the bottom of the ‘T’) is bad, even for Coors Light.

There were also technical difficulties with his keyboard, which Mallman first blamed on Fontana’s DI (“That’s ‘direct input’, kids…”), but then found out were his own fault – not that one would be surprised, considering how Mallman treats his instrument.  He didn’t just play while standing on his stool, but stood on his keyboard, climbed on it, pretty much mounted it during his performance, and ended the evening by lifting it up in the air.  It was impressive that he could show so much stage energy, given 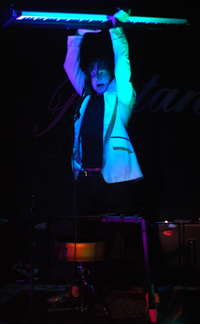 all that was stacked against him.

However, Mallman could have done better with his song choice.  Having just put out the excellent Invincible Criminal (QRO review), you’d expect him to play mostly off of it, but instead hit up just two songs, the aforementioned “You’re Never Alone In New York” and the title track.  Some of that was due to Mallman skipping a few songs on his set list (QRO photo), and one of those skipped was unfortunately the awesome “White Leather”.  But he still stuck primarily to his earlier songs, like “Death Wish” and “True Love” – as well as a great cover of Hall & Oates’ “She’s a Maniac”.  With just his keyboard, Aaron on drums, and some backing tracks, Mallman likely couldn’t have quite replicated the bigger sounds of Criminal, but it would have been nice to seem him try to more. 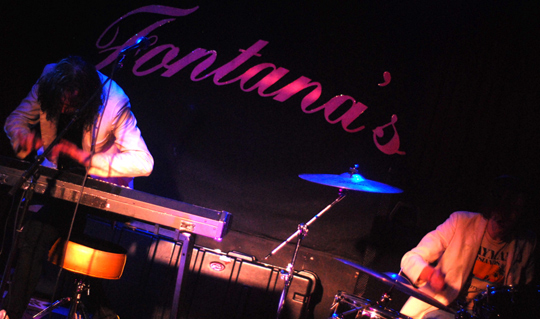