<div><a href="Features/Features/Married_Indie_Couples/"><img src="http://www.qromag.com/wp-content/uploads/2007/04/marriedindiecouples.jpg" alt=" " /></a> </div><div> </div><div align="left">One cool aspect of the indie rock world is that there are a decent amount of married couples in the mix, and... 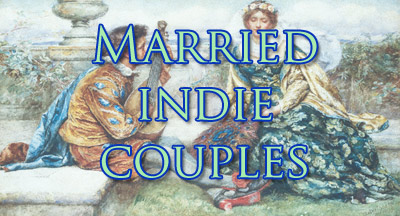 One cool aspect of the indie rock world is that there are a decent amount of married couples in the mix, and they tend to be pretty successful.  Some have been around for decades, some just a couple of years, but they all have great balance to their music, which belies the same for their relationships.  Here's a list of some of the most famous couples:

Dean & Britta
Dean Wareham & Britta Phillips
Reside: New York, NY
Former Luna members have been around in the down-tempo rock scene for a while.  Recently released Back Numbers (QRO Review)

Blanche
Dan & Tracee Miller (with others)
Reside: Detroit, Michigan
Country-western throwbacks bring the charm and class.  Well-connected and respected throughout the Detroit scene.  Seeing them live is truly a blast from the past (QRO Photo Gallery).

Mates of State
Kori Gardner and Jason Hammel
Reside:  East Haven, Connecticut
High-energy rockouts with solid harmonies.  Currently, one of the more hip couples on the list.  Released Bring It Back in 2006.

Over the Rhine
Linford Detweiler & Karin Bergquist (with others)
Reside: Cincinnati, Ohio
Cool, dark alt-rock with smooth vocals and music with a loungey slickness.  Will release The Trumpet Child in 2007.

Low
Alan Sparhawk & Mimi Parker (with others)
Reside: Duluth, Minnesota
Slow-core icons have been around for awhile.  Most recently released Drums & Guns in 2007 (QRO Review).

Yo La Tengo
Ira Kaplan and Georgia Hubley
Reside: Hoboken, New Jersey
Alt-rock veterans with one of the more eccentric catalogs of their peers.  Released I Am Not Afraid of You and I Will Beat Your Ass in 2006 (QRO Top 15 of 2006)

The Rosebuds : Night of the Furies