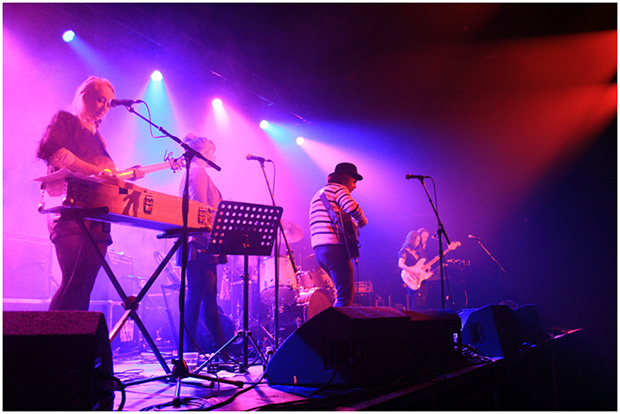 Martin Creed and his band entered the stage at O2 Academy in Manchester on Saturday, May 12th, with no pre-conceived ideas, the audience of mostly 19-22 year-olds standing to be entertained, hungry to be educated in the ways of music… (way of avoiding saying "students").  Standing in between three women and two men, Creed’s bowler hat, moustache and curly hair were already giving a clue as to his eccentric persona.

I was going to avoid writing about Martin’s Turner prize, but it’s a bit like trying to avoid not mentioning that Stella McCartney is the daughter of some bloke from Liverpool.  So yes, Creed won the Turner Prize that Madonna presented to him, but watching that back on video he’s more impressed to show off his prize to his parents, who were excitedly cheering in front of the stage!

Art, whatever it is to the beholder, comes in different guises.  Here’s another way, music.  Creed’s music – avant-garde/surreal/genius or plain bonkers come to mind.

Creed’s Wakefield birth (although brought up in Scotland) linked him with The Cribs, who he was supporting this evening.

Songs like "A-Z", which was "AAAAA BBBBBB CCCCC…" through to "ZZZZZ" sung in Creed’s strong Scottish accent to a rapid manic tune, were simply infectious, the crowd definitely getting it, and were singing along because they knew the words!…

Benjamin Kane was drumming with one hand to one track, robotic dancing using his chin; all of them were playing as though the audience wasn’t there.  Not to say that they weren’t performing, but that instead they were enjoying what they were doing – Rob Eagle, keyboards zoning out to the music chanting, barely smiling, Anouchka Grose also on keyboards, guitar and vocals, and Keiko Owada’s guitar playing full of enjoyment and fun.

The lyrics and music seemed to be separated in message, the words to the point, saying only what they needed to say.  The song "Fuck Off", instead of being a punk screaming feedback wall of sound, was given a repetitive, melody as a wee pal to hold their hand.  The backing vocals of Megan Jenkins sweetly singing "fuck off" added to the humour and innocence of the performance.

Creed finished with "1-100" (again the words "does exactly what it says on the tin").  How could you not smile and feel a friend of this, one off, quirky bloke?

What’s The Point Of It?

I Don’t Want What I Want

You’re The One For Me

I Can’t Stop Thinking About You