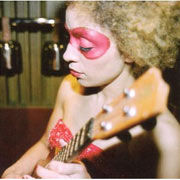 The trip-hop scene that emerged in the U.K. in the nineties was all about collaborations, akin to the electronica & hip-hop scenes that it fused together.  One of the earliest collaborators was singer Martina Topley-Bird, who worked with trip-hop pioneer Tricky (QRO photos) on much of his early work, before a falling out between them in 1998.  So Topley-Bird struck out on her own with first solo record Quixotic, and more recently with 2008’s The Blue God, but has returned to the collaborating fold with another charter trip-hopper, Massive Attack (QRO photos with Topley-Bird), on this year’s Heligoland (QRO review).  But in her solo work, Topley-Bird has eschewed not just collaboration or trip-hop but instrumentation as well, going stripped & relying on her strong voice on Some Place Simple.

Click here for photos of Martina Topley-Bird at CMJ 2010 in New York, NY in the QRO Concert Photo Gallery

Click here for photos of Martina Topley-Bird at Wiltern Theatre in Los Angeles, CA on May 18th, 2010 in the QRO Concert Photo Gallery

Quixotic had its own quixotic journey to American release, tracks changed & rearranged to come out in the States as Anything, and Some Place Simple contains many of the same songs as The Blue God.  But Topley-Bird significantly reduces the instruments from Quixotic, with the focus almost always on her vocals – which are thankfully very good (there’s a reason she’s been such a sought-after collaborator).  From the beginning with opener/single "Baby Blue", Topley-Bird plays it sweet & stripped, voice & guitar on "Blue", voice & keys on the following "Phoenix".  This reduction can make the songs sound too similar to one another, and too simple (like the little da-da-da, "Da Da Da").  But it also lets the standouts really stand out, such as the Caribbean rhythms to single "Poison" or gritty, distorted blues-guitar of "Too Tough" – putting to shame so many of the too many guitar-and-drums wanna-be White Stripes (QRO live review) duos out there, "Too Tough" makes you wish Topley-Bird had done more of this.

People who’ve only heard of Martina Topley-Bird through her trip-hop collaborations should be know that her solo work is not trip-hop; indeed, Some Place Simple goes much in the opposite direction, away from massive instruments and towards stripped vocals.  But she pulls it off, and that’s what’s important.