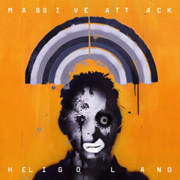 It’s been about twenty years for Massive Attack.  The Bristol-born British band was at the leading edge of the so-called ‘trip-hop’ movement in the early nineties, alongside artists such as Portishead and former collaborator Tricky (QRO photos), though pretty much everyone in the scene hated the label or being lumped all together (hardly the first burgeoning scene to feel that way…).  The trio grew as the English hip-hop-meets-electronica grew in the nineties, only to virtually break up as the millennium changed: first Andy ‘Mushroom’ Vowles left/was booted out in 1999, and then Grant ‘Daddy G’ Marshall semi-left in 2001, leaving the band effectively just Robert ‘30’ Del Naja & producer Neil Davidge, or basically just a production act.  Marshall returned to tour the essentially-Del Naja-solo Massive Attack record, 2003’s 100th Window, but then the outfit drifted into soundtrack and production work, only out since then with the contractually obligated greatest hits release, 2006’s Collected.  The group claimed that it would buy them more time to work on “LP 5”, but it was a lot of time – only now, in 2010, does Massive Attack return with Heligoland.  But they seem to be ready for the next decade, after virtually skipping the last.

Click here for photos of Massive Attack at Beacon Theatre in New York, NY on October 21st, 2010 in the QRO Concert Photo Gallery

Click here for photos of Massive Attack at Wiltern Theatre in Los Angeles, CA on May 18th, 2010 in the QRO Concert Photo Gallery

Click here for QRO’s review of Massive Attack at Orpheum Theatre in Boston, MA in 2006

Though Del Naja dominates, this is a record with Marshall as well, the first studio record with Massive Attack as a real duo.  The darker, more beat-driven, more pressing Heligoland (named after a speck of an archipelago in the North Sea, which saw serious naval battles between Britain & Germany in the First and Second World Wars) perhaps as a result rises and falls more with the contributing vocalist.  Massive Attack have always used guest vocalists, but have a wider spectrum than ever on the new record, probably due to the long production time (artists recorded in the period after 100th Window, but not on Heligoland, include Aku & Akwetey Orraca-Tetteh of Dragons of Zynth, as well as Beth Orton).  Tunde Adebimpe of TV On the Radio (QRO live review) starts the album off with “Pray for Rain”, a dark, rhythmic haunt that is a good introduction to the new stylings of Massive Attack, while also strong in its own right.  From there, the dark, pressing, tech-strip continues with “Babel”, single “Splitting the Atom” (which features vocals from both Del Naja & Marshall, as well as longtime guest-vocalist Horace Andy), and “Girl I Love You”, but only the last of those breaks up the somewhat monochromatic feel, thanks to lower horns and higher vocals.  Unfortunately, higher vocals mar the subsequent “Psyche”, as Martina Topley-Bird (who’s also worked with Tricky) goes into Japanese girl range, and there’s little else to the piece.

The low-key tech-experiment that follows, “Flat of the Blade”, seems to portend a weak record: most of the time, Heligoland is too restrained and colorless, and when color is added, it’s not the right kind.  But then comes the high, sweet, beguiling vocals of “Paradise Circus”, thanks to Hope Sandoval (QRO album review); the former Mazzy Star was highly needed, and highly delivered, as the back-end of Heligoland seriously picks up.  The dark restraint of “Rush Minute” is made more interesting with bigger haunting moments, while the ever-malleable Damon Albarn (Blur, Gorillaz, Monkey, The Good, The Bad & The Queen) fits right into Massive Attack’s distant emotion and heartbreak.  Finale “Atlas Air” adds up all of the band’s moves, though, at almost eight minutes, is really too long.

Better guest-vocalists do make for better Massive Attack on Heligoland (though it should be noted that both “Rush” and “Atlas” are sung by Del Naja himself, while “Flat”, the weakest track on the record, featured Guy Garvey of Elbow), but the group has used their massive time off (including some at Albarn’s own studios) to move their sound.  Gone are the grander atmospherics of the nineties, replaced with a dark pierce for these dark, piercing times.