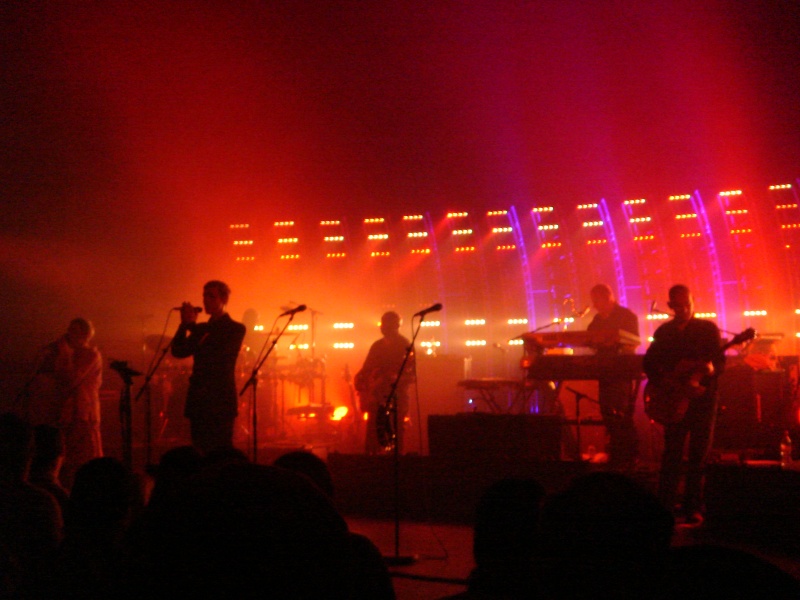 Massive Attack rolled into Boston on a rainy Sunday night near the end of their tour, and jammed through a dense setlist with alternating singers, doubled-up drummers, and enough LED lighting to weigh down a blimp.  In support of their greatest hits album, they ran through their best, finally getting the crowd on their feet in the encore, and ultimately leaving them begging for more.  Everyone but Daddy G was there, but the rest did a great job of helping us forget.

Robert Del Naja (“3D”) was the star of the show, but the whole before they came on stage, LED tickers scrolled various facts about Boston, famous Bostonians’ names, and got the crowd interested in what would turn into a life lesson-type of concert.  He started out calmly with “False Flags”, and was relatively docile until a couple of songs later, he started his Bat-tusi/shadowboxing routine.

Soon, Elisabeth Fraser came out for “Black Milk”, which a lot of people wished was “Teardrop”, but you just knew it was coming.  In the meantime, Horace Andy came out for “Man Next Door”, and rocked his little Michael Jackson-esque vocals.  He beautifully duo-ed with the gospel-y Deborah Miller on “Hymn of the Big Wheel” before Fraser came back out for their most famous tune, good ol’ “Teardrop”.  She wasn’t as loud as we’d like, as you can tell from the video below, but enjoyable nonetheless.

The band’s energy picked up through “Angel” and “Futureproof”, driving towards the end, giving us an encore that finished up on Miller’s soaring vocals on “Safe from Harm”.  At one point, Del Naja gave us a spiel about war and responsibility before LEDs scrolled with statistics about the Iraq War.  Who can resist being political these days?

Overall, it wasn’t overpowering, but certainly an intriguing show.  The group ran the gamut of vocals and the band, with an array of beats and sounds proved that they were worth the greatest hits collection and tour.  Apparently Daddy G will be there for New York, so look out.