Mastodon started out as a hard rock/heavy metal band and despite consistently evolving musically, they continue to be pigeonholed as metal even though they have done a great job... 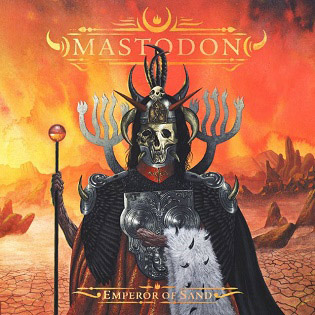 Mastodon started out as a hard rock/heavy metal band and despite consistently evolving musically, they continue to be pigeonholed as metal even though they have done a great job differentiating themselves from that genre. They consistently demonstrate their propensity for not only metal and hard rock, but blues-based and psychedelic rock as well.

Mastodon’s last two albums did a good job of laying the groundwork for broader horizons, however they lacked that definable concept album quality that Mastodon did so well identifying themselves with in the first half of their career. After their last album, 2014’s Once More ‘Round the Sun, they ran the risk of confusing fans and making themselves too hard to qualify and quantify musically. Thankfully, their latest studio album Emperor of Sand does an amazing job marrying the Mastodon of the past few years with the Mastodon of the early years.

But these guys do deserve props for their recent musical growth and evolution. The main difference between modern day Mastodon and the Mastodon of the past is drummer Brann Dailor’s emerging vocal prowess. The first time listeners got a taste of what he could do as a singer came on their last great album, 2009’s Crack the Skye, on the songs “Oblivion” and the title track “Crack the Skye.” Since then we have heard him continue as a singer on other songs such as “Curl of the Burl” and “Creature Lives” from 2011’s The Hunter (QRO review) as well as “The Motherload” and “High Road” from Once More ‘Round the Sun.

But Emperor of Sand appears to display an arrival of sorts at what we can now see Dailor’s vocal path was leading him towards. This is most evident on the song “Steambreather”. His vocal lines explore ranges that guitarist Brent Hinds and Troy Sanders have never accomplished and that is not meant as a slight to Hinds and Sanders. Dailor’s vocals add a layer of necessary complexity to where this band is headed and it takes what the two aforementioned men have done and builds upon it. In terms of vocalists for a hard rock/heavy metal band, the trinity of Hinds, Sanders, and Dailor is truly a force to be reckoned with. For goodness sake, Hinds and Sanders are found singing backup vocals to him on this album. For the drummer of any band, that is an achievement not to be sniffed at. Playing drums the way Dailor does puts him in the hall of fame of modern musicians, but to add to that his newfound vocal capabilities skyrockets him beyond even that point.

There are many other facts about Emperor of Sand that are worth calling attention to, but chief among them is that this album marks Mastodon returning to work with producer Brendan O’Brien, with whom they haven’t worked since 2009 when they released Crack the Skye. O’Brien’s influence is obvious throughout this album, especially given the contrast and, sadly, sporadic feel of the last two albums. He seems to have helped them in their quest to merge their musical evolution with what they used to do conceptually. There are a couple of downfalls, however, in that sonically this album sounds pretty similar to Crack the Skye, namely the song “Scorpion Breath”, sounds a little too familiar to “Divinations” from that album. But given the grandiose and awesome scope of Emperor, that might just be nitpicking.

Another fact of note, and perhaps the most important one as we can all relate, is that this album deals with hard times and loss. Guitarist Bill Kelliher’s mother passed away as he started writing riffs for Emperor. Furthermore, Sanders’s wife and Dailor’s mother were battling cancer. Needless to say, it was a tough time for this band and all of these issues weave themselves into the concept of this album, a journey through life and death and ultimately self-actualization, which, at this point, it is clearly up to the listener to decide what he or she will decide the story is and what it means.

Emperor of Sand will leave listeners even more eager to see what these four guys are capable of in years to come perhaps more than any album of theirs ever has. Not to mention, it continues the great Mastodon tradition of having an amazing album cover and packaging.