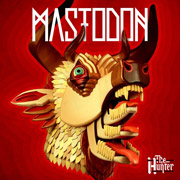 For metal gods Mastodon, finding a way to top 2009’s epic and perfectly crafted concept album Crack the Skye was no small undertaking.  In many ways, that album was a pinnacle for them, not only in sound but also in production.  They worked with mega-producer Brendan O’Brien whose talents and desirability may be second only to Rick Rubin.  The result was a truly masterful offering that was well received both by fans and non-fans alike.  Respectably, the Atlanta quartet must have realized that lightning doesn’t strike the same place twice and decided that for their follow-up, a change in direction was in order.  For their new album The Hunter they chose to work with an unexpected producer in Mike Elizondo who has previously worked with acts such as 50 Cent, Fiona Apple, Maroon 5, Carrie Underwood, and Switchfoot.

Another unexpected turn of events in the story of The Hunter was that Mastodon made clear from the beginning that it would not be a concept album.  This marks their first non-concept album since 2002’s Remission.  At first, the idea of a non-concept Mastodon album was a tough pill to swallow.  They have had so much success with that approach in the past on records such as 2004’s Leviathan, 2006’s Blood Mountain, and of course the aforementioned Crack the Skye in 2009, that it seemed natural that they should want to continue that trend.  But not far into The Hunter, it’s easy to see that this is the same Mastodon that listeners have come to know and love, but are also more focused and reinvigorated.

From the first chord of the album’s opening song “Black Tongue”, listeners will know that they are in for a treat that could only be afforded them by the likes of Mastodon, not to mention the song’s first two lyrics, “I burned out my eyes / I cut off my tongue.”  It’s clear with The Hunter that things are just as epic as ever.

Although the songs on this album don’t adhere to an over-arching storyline, if listeners use their imagination it isn’t hard to picture a character known as, of course, “The Hunter”, battling his way through dense forests and coming across beasts similar to that shown on the cover of the album.

To date Mastodon’s sound has always been described as ‘sludgy’.  This album still exhibits those tendencies, but is more refined and crisp sounding.  Traditional elements are present such as a mixture of acoustic and electric guitars, drummer Brann Dailor’s thundering beats and rapid fills, and all members but guitarist Bill Kelliher sharing vocal duties.  What is different is that no song on the album clocks in any longer than five-and-a-half minutes.  This is quite the shift, especially from Crack the Skye, where two tracks were each over ten minutes.  Among other notable features is the track “The Creature Lives”, which marks the first Mastodon song entirely composed and sung by drummer Brann Dailor.  Another difference is that Mastodon seem to have taken a bit more of a humorist approach to some of their song titles, for example, “Blasteroid”, “Stargasm”, and “The Octopus Has No Friends”.

Despite the more silly side of the album, The Hunter gets its name in honor of guitarist Brent Hinds’ brother who unexpectedly passed away last December in a hunting accident.

Overall, The Hunter proves to be another solid installment in an already stellar catalogue of Mastodon albums.  The impressive thing with this album is that, to newcomers, it exhibits a Mastodon that is more easily digestible and accessible than on previous albums, perhaps less overwhelming.  But at the same time it’s easy to see that they stayed true to themselves and are able to satisfy longtime fans and keep them eager for whatever might come next.  From that double-appeal standpoint, The Hunter is quite the success.