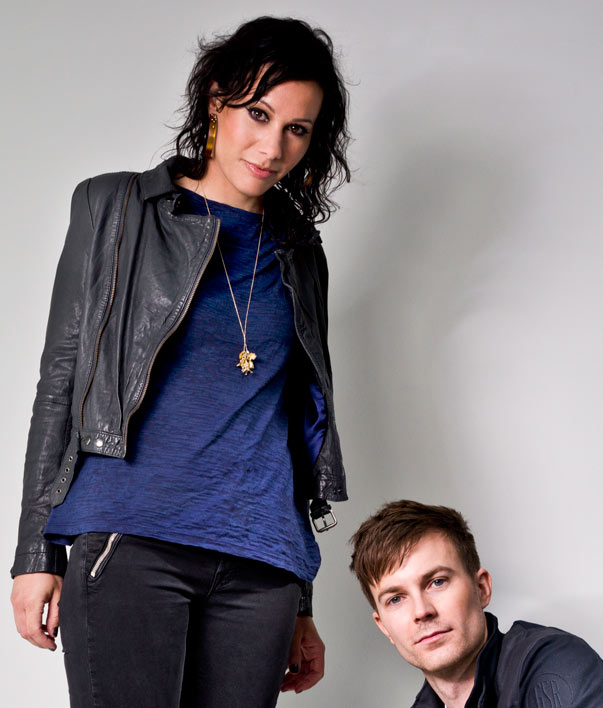 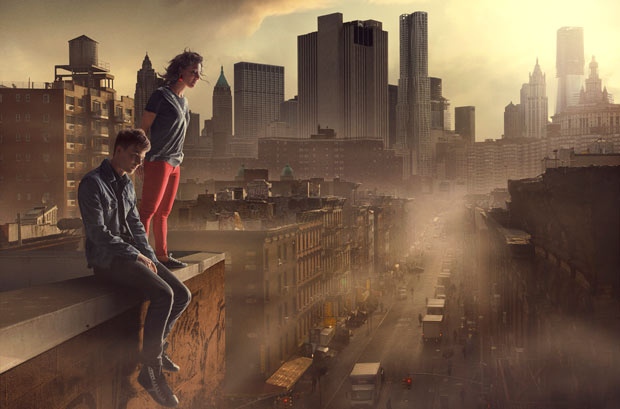 QRO has been following the duo of Matt Johnson & Kim Schifino – a.k.a. Matt & Kim – for years now, and it’s been great to see them get bigger & bigger without losing what makes them great.  Right after throwin’ down a crazy show in their hometown at Terminal 5 – complete with a guy crowdsurfing from the front of the crowd all the way to the bar in the back, getting a beer, and crowdsurfing back to the front of the crowd after Kim asked for it, along with Matt & Kim’s ‘standard’ balloons, confetti, and Kim’s own crowd-surfing ‘booty dance’ – Matt talked once again with QRO.  In the conversation, the singer/keyboardist talked about the wildness at that show & their shows in general, but also taking breaths during their sets, easing drummer Kim into singing solo, their photos on bathroom doors, why you shouldn’t bring your little kids to their all-ages shows, and more…

Matt Johnson: Hey – I think I saw you in the photo pit. 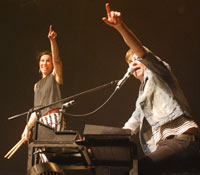 QRO: You & Kim are always pointing at people – but it seems like you’re pointing at everyone…

QRO: It was a great show!

MJ: I agree.  Sometimes, we get nervous – you know, in New York, sometimes I go out to shows and people seem a little more like they’ve seen it all & whatnot, but totally that show was awesome.  One of the best of the tour…

QRO: I was actually by the bar when the crowd-surfer made it to the bar & back!

MJ: That was incredible!  When I left the building, that kid was waiting out, to take pictures with us.

It was the first time I ever gave someone else my phone – I was like, “I want to take a picture with this guy!”

How are you feeling?  I know that you were sick.

MJ: I had the never-ending sickness for a lot of this tour.  For about four-to-five weeks of it, I couldn’t get rid of it.  Then realized it was an infection – a bug.  I thought it was a cold that would just go away.  Had to cancel a couple of shows because I was losing my voice so bad.  We’ve rescheduled Miami & Tempe, Arizona.

Finally, I had a doctor come out.  He got me on antibiotics.  So, after that, I started getting a little better. 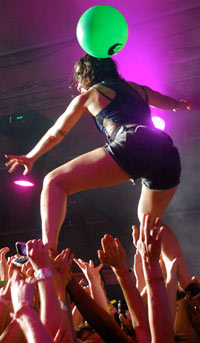 QRO: Do you ever get scared for Kim when she goes out to do her crowd-surfing booty dance?

MJ: No, not really.  I get scared for people I see crowdsurfing, because they’re the ones who get dropped.  But it seems like no one’s gonna let Kim fall, when she’s up there.  I get a little bit nervous that the whole crowd will tip over together, a few hundred people.  Sometimes, when everyone pushes towards her, it gets a little bit like that.

I’m usually taking that chance, time to catch my breath, so I’m kind of hiding.  So maybe I don’t see it as much as everyone else does.

QRO: Do you schedule that for when you want to take a breath?

MJ: Well, sort of, but also we look into the whole set order and what not, and we feel that we put that pretty close to the end.  Different things that go into it.

QRO: When you’re making the set list, do you schedule the slow songs for when you think you’ll need a breath?

MJ: Generally, we schedule them when we think the audience might need a break.  If we have a bunch of really fast or wild ones, we’re like, ‘Well, maybe we should take a slow break before we do some more, so that people don’t get too worn out.’  But I think it’s also for us as well. 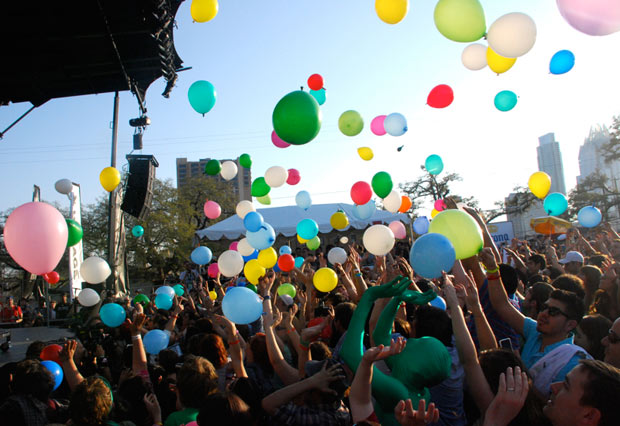 QRO: Do you buy balloons & confetti in bulk, or on each stop on the tour?

MJ: [laughs] Well, we get bulk.  Even though, sometimes we used to just have someone go to Walgreen’s or whatever and get more.

I always call it our ‘two dollar & ninety-nine cents fireworks display’.  Because the bag of balloon makes a big impact for such a small expense.

QRO: When you started, you were very DIY, had a much lower budget – do you think that’s a bit keeping with that?

MJ: I think so, yeah, but I think sometimes bands get really caught up, people who do production, in just what the most expensive, most recent rentals that the lighting rental house did.  And I think, even the way we’ve done our music videos, we’ve always been more about ideas – ‘Oh, that’s a cool idea!’  Or we always trying to think of ‘Why didn’t I think of that?’ sort of thing.  So it doesn’t have to be…

We were doing it when we were on tour with Blink-182 (QRO album review) in big places, and we’re doing that show [on February 8th] at Madison Square Garden (QRO venue review) with Passion Pit (QRO live review); I don’t know if we’re going to be able to.  The balloons only reach the first five hundred people – and when there’s seventy thousand it’s tougher to make it work…

QRO: Is it harder when you’re opening at massive places, like on the Blink-182 or with Passion Pit at Madison Square Garden, to bring those extra elements in?

MJ: The confetti, I feel, sometimes that, we make a big mess on stage.

We did a show at a college earlier this year, where we played before Grand Funk Railroad did.  We brought the confetti and all of that.  The wind was blowing back towards the stage.  Basically, all of Grand Funk Railroad’s equipment was covered in confetti when we were done playing.  That’s what’s band about that, when that happens.

QRO: What brought about Kim actually singing on “Ten Dollars I Found”?  I thought that she said (to QRO) that, “Nobody wants to hear me sing”?

MJ: We both sang that together, on the album.  And then on tour, we were both singing together as well, but then I started losing my voice, so we added in a couple – when I was really losing my voice bad – a couple instrumentals, and then she said, “Well, I’ll just do all the vocals on this song, so you can take a break.”  So she started doing it, and I find it nice to hand over the mike for a song.

QRO: So you sort of eased her into singing solo – first it was with you, then it was because you had to, and now…

MJ: She’s not a fan of singing when she’s playing the drums.  She doesn’t like having anything restricting her wild drumming, like having a mike nearby that she can hit.  She likes singing a bit, though, if it’s just her, but we still don’t have many songs without drums.

QRO: It was recently CMJ here in NYC (QRO recap), and FADER – the magazine & your label – had set up their ‘FADER Fort’ for the festival.  Did you know that they put life-size images of you & Kim on the men & women’s bathroom doors?

MJ: Yeah [laughs].  We had done some of the first recording in that studio – they’d just opened it when we did our Converse collaboration song with Soulja Boy & Andrew W.K. (QRO live review).  Shortly after that came out – those were the pictures we had taken for that campaign – they showed up as the men’s & women’s room’s doors – men’s room me, women’s room Kim.  I thought it was just awesome. 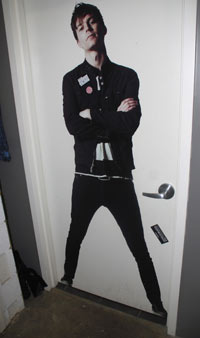 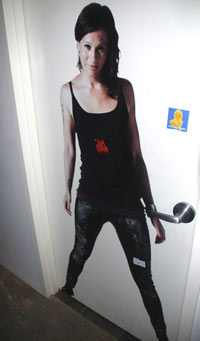 QRO: No, it was cool – just very unexpected…

MJ: We both have pictures, standing next to those doors, doing the same pose.

QRO: [laughs] That’s awesome!  Are you ever worried that they’re gonna put them on the wrong rooms – you on the women’s & Kim’s on the men’s?

QRO: On the very first recording, you had that secret track where Kim mentions Chloe, a girl she baby-sat for, and how you can’t swear because Chloe could be listening.  Is she old enough now to listen to you guys, even if you swear?

MJ: I don’t know, I guess Chloe – how old would she be now?  She might be about ten years old now – maybe not quite old enough. 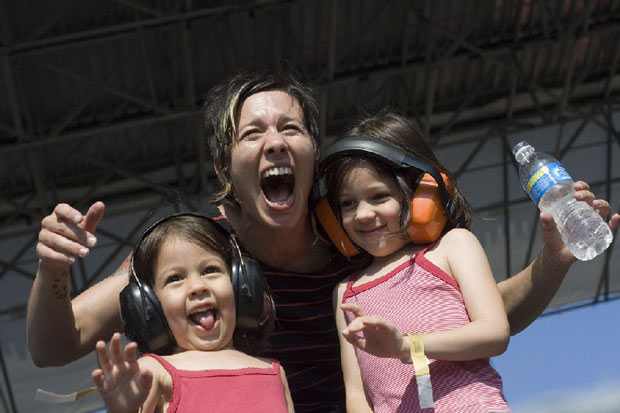 We’ve had parents bringing their young children, single-digit age children to shows.  We feel kind of bad, because we don’t really swear much in song, as you know, our stage banter can have a lot of ‘adult’ content…  There was a show in Atlanta, Georgia where our manager received an email, really upset, ‘cause he’d brought his young children.

QRO: A couple of years ago, at South-by-Southwest (QRO recap), I saw you twice – once was an all-ages thing for MTV, and then you also had the one at FADERFort.  That was 21+ – did you change your show at all, or just your banter at all, thinking, ‘Okay, now I’m at a 21+ show, as opposed to the network show’? 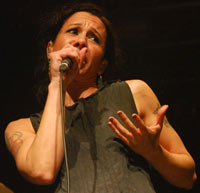 I guess a little bit, it changes like that, but for the most part, it’s pretty much the same.

[editor’s note: At all-ages Terminal 5, Kim discussed things like taping her bra to her shirt, ‘the itty-bitty-titty committee’ and how, if she was on her period that night, her boobs would be bigger and she’d just let one pop out – plus how many times she would say “vagina” that night…]

QRO: By now, are you used to playing the kind of bigger venues that you have been playing on this tour, or do spaces like Terminal 5 (QRO venue review) still faze you?

MJ: Well, when we’re not playing for like a television thing, I feel very comfortable, I feel like the stage is a second home.

In most any venues I play, but something like Terminal 5, it’s weird, especially it’s our band’s hometown, and there’s a lot of friends there, and lot of people who work with us – so many people we just don’t want to disappoint, every show over there.  I definitely get a littler nervous just about all of that.

QRO: What do you think of photo pits – they’re keeping you separated from your fans, or providing necessary distance at this point?

MJ: Our thing is, when there’s no sort of barricade, and we get a lot of crowd-surfers – there’s no one to catch them, if it’s just right on the stage.  I’ve seen people get crowd-surfed up and fall on their back on the corner of our riser, and people throw them onto the stage, stuff like that.  So we just want to make sure everyone stays fine.

People crowdsurfing – without any photo pit – at the much smaller 70 Greene Street to “Cutdown” in New York, NY on May 28th, 2008:

And then, as far as being photoed, stuff like that, I don’t know – there’s usually the rule of a few songs in the pit to take the photos, but I kind of think there’s stuff throughout the whole show I want people to capture.