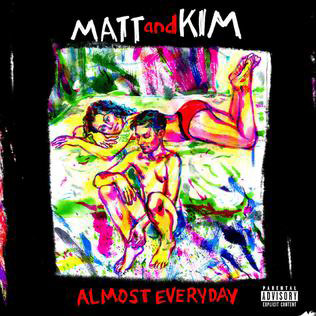 By this point, Matt & Kim aren’t wunderkinds anymore, their keys-and-drum cheery couple not what’s brand new with the kids these days. They recently had to take their longest break ever, after drummer Kim Schifino injured herself (while performing, of course), but come roaring back with Almost Everyday. Yes, it is the Matt & Kim you remember, but that includes not aging, and one is more able to enjoy them just for who they are, in and of themselves.

Those Matt & Kim hallmarks includes the group’s relentless positivity (the most this side of Andrew W.K.), including advocating for doing stuff over not doing stuff. “I’d Rather” is probably the strongest in this vein, with some great Matt Johnson lyrics, including a rhyme with “dungarees” that needs to be used in a pants commercial. Perhaps not quite as much of a dance record as previous releases, Almost does touch upon getting older, but only in that they’re still young on tracks like “Like I Used To Be” and “Youngest I Will Be”.

After all of the duo’By this point, Matt & Kim aren’t wunderkinds anymores astonishing success, they didn’t need to reach out for even more fans, but rather after their forced hiatus, remind everyone why the loved, and still love, Matt & Kim.