Matt & Kim brought 'Grand' back to the city where they first bumped for its tenth anniversary.... 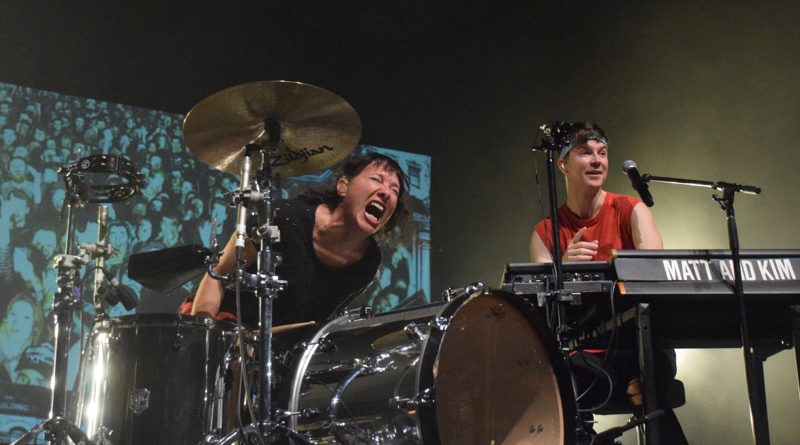 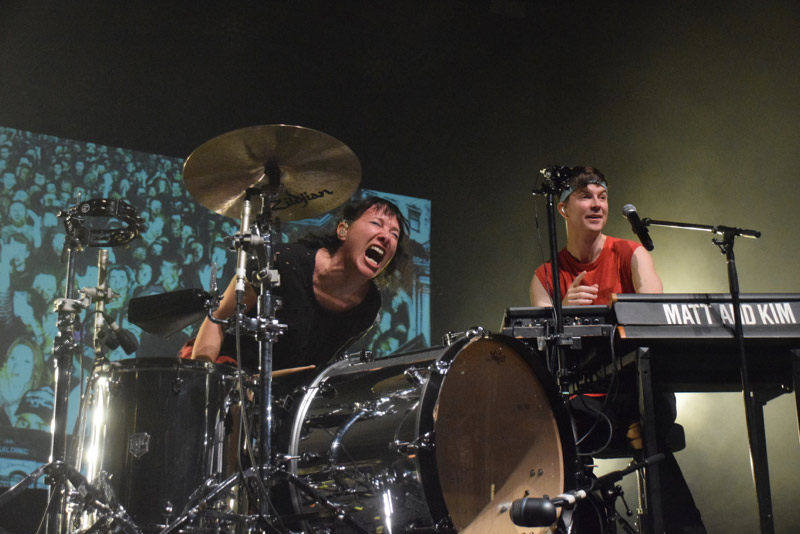 Matt & Kim emerged from the Brooklyn house party rock scene in the first decade of this century/millennium, winning fans over with their extreme exuberance and wild shows. They put out debut EP To/From in 2005, self-titled debut LP in 2006, capturing their crazy rise, but it was 2009’s Grand (QRO review) that really solidified their place on the map, proving that the keys-and-drums duo were more than just a passing fad. For Grand’s 10th anniversary, the Matt Johnson & Kim Schifino headed out on the road to play it and more, the tour ending in the city where it all began, New York, the first of two shows at Terminal 5 (QRO venue review) on Sunday, November 24th.

Matt & Kim shows have long been raucous affairs, from their early DIY events (QRO photos) to big-time gigs like at Terminal 5 (QRO live review from Terminal 5 in ‘15). The duo has gotten older (haven’t we all?), but their crowd hasn’t, at least not as much, as the audience in 2019 ranged from aging hipsters who still have Grand on CD to kids there with their parents, with the teens and young twenty-somethings up front to party down & rock out. Indeed, Matt & Kim shows are a bit stressful for security, with crowd-surfers, girls on shoulders, mosh pits, and more.

Johnson & Schifino bounced onto stage with Grand single & opener “Daylight” – Johnson may have missed when he was supposed to start singing, but seemingly only the pair themselves noticed. Doing all of Grand, though not in direct track order, meant playing some songs that they don’t normally play, like the “awkward” “Good Ol’ Fashioned Nightmare”, Schifino leaving her drums and taking up keys for “Turn This Boat Around” (“I was trying so hard not to fuck up”), and this was the only tour they’d ever done “I’ll Take Us Home”. They even closed the Grand portion with its actual closer, the outro remix of “Daylight”. 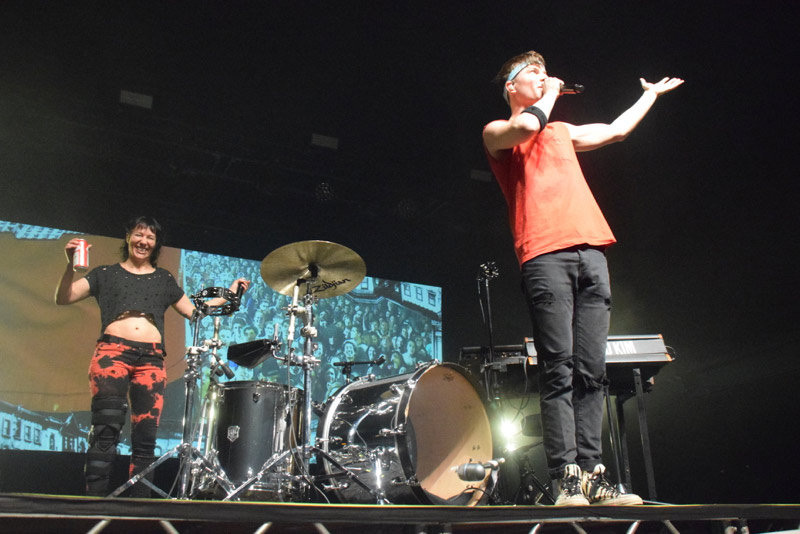 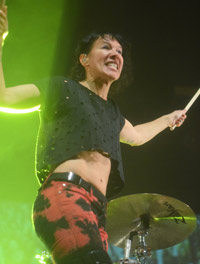 Of course, a big part of any Matt & Kim show is their hilarious on-stage banter, Johnson’s usually self-deprecating, Schifino’s invariably filthy (one wonders what those parents thought when their little kids heard Schifino talking about the band’s sex life…). When Johnson remarked that they were ending the Grand anniversary tour in the city that they first met in, Schifino pointed out that it was the city they first “bumped” in (she would also invite “bumping” – of the non-sex kind – during the show, because a Matt & Kim show without it wouldn’t be right, but, “Don’t be a dick”). Johnson called “Nightmare” “awkward” before playing it, with which Schifino imagined being told before sex that it was going to be “awkward,” at first aghast, then into it (Johnson also called his dancing awkward, comparing it to the blow-up guys in front of car dealerships). They threw out balloons to blow up & bounce around to The Ramones’ “Blitzkrieg Bop”, mentioned that MMA fighter Rhonda Rousey called “Don’t Slow Down” her “fight song,” and Schifino noted that winter was coming, so find someone to fuck until the spring.

There was also a “fucking power point presentation on Grand.” These were photos from the making of it, which took place in Johnson’s parent’s house in rural Vermont, where one could see nothing but snow & trees out of his window. Highlighted was Schifino’s Johnson-made mullet, him saying to keep her neck warm – and because he wanted to see a mullet when he had sex with her from behind, she adding that he just wanted to see himself & his mullet when having sex with her from behind, though they didn’t have sex then because Johnson was worried that his parents might hear. Schifino said she did give him a blowjob in the bathroom while his parents were at the grocery store, prompting “Kim!” chants, that were followed by “Matt!” for photos of him, including in just a towel.

After the “warm-up” of Grand, Matt & Kim left the stage to confetti and a sign saying “Happy Birthday Grand” and “You Made Mom and Dad Happy,” as well as old-timey movie theater intermission cartoons. At just thirty minutes, Grand obviously isn’t enough for a full show, and indeed there was a whole second half – which wasn’t just newer songs, but even older ones, like the first one their ever wrote, To/From’s “Silver Tiles”. There were Matt & Kim’s custom blow-up dolls (on sale for $20 at merch table) for “Hey Now” off of 2015’s New Glow (QRO review), and a “wall of death” of the two sides of the audience running into each other for the new, dancey “Go Go” (“You might get pregnant,” but, once again, “Don’t be a dick”). For the new pop song “Money”, Johnson pointed out the difficulty for 5’3” ladies like Schifino to see at shows, asking for that songs for girls that height or under to get on someone’s shoulders (despite the venue never wanting anyone on shoulders). 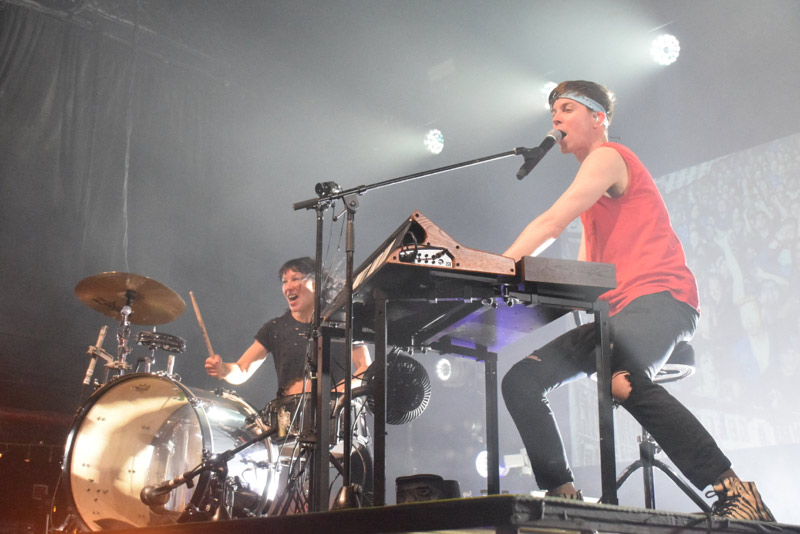 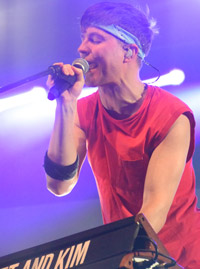 At one point, Johnson pointed out that Schifino’s parents were at the show the prior night, and his parents would be there the next night, so then they were on their best behavior, but tonight he admitted that he’d, “Take my dick out if it wasn’t illegal!” Johnson quickly followed up by saying that he’d need consent from everyone, with which Schifino said she could get it, to which Johnson finally demurred, “You called my bluff.”

But Johnson did get Schifino to show her “tits” after that, “Give a shout out to Kim & the twins!” Schifino mentioned doing it the prior night, only to lock eyes with her dad (memorialized in Matt & Kim’s “Frank”) while she did. Johnson did refer to her captaincy of the “itty-bitty-titty club,” and how, when they got their blow-up dolls’ designs, asked for her breasts to be smaller, which the company said no one had ever asked for before. Besides, as Schifino pointed out, “Every titty is a good titty.” And Schifino not only got dollar bills during “Money”, but also posted her own stripper Venmo account.

Almost twenty years into the twenty-first century, it’s easy to feel old. Millennials are watching Gen Z slowly rise and replace them, just as Gen X had to watch Millennials do the same to those old fogies. But Matt & Kim have held onto their youth, filthy jokes and all, and for one night, so could we all. 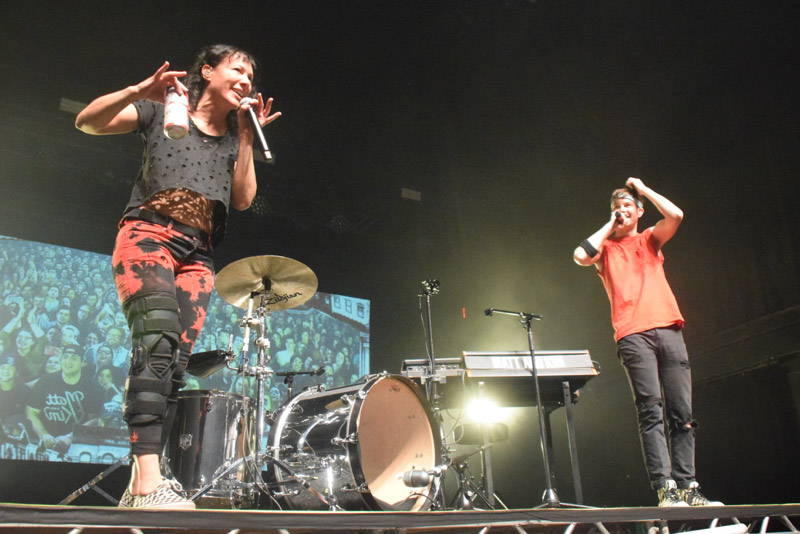