All bands play live shows with the best intention of entertaining an audience.... 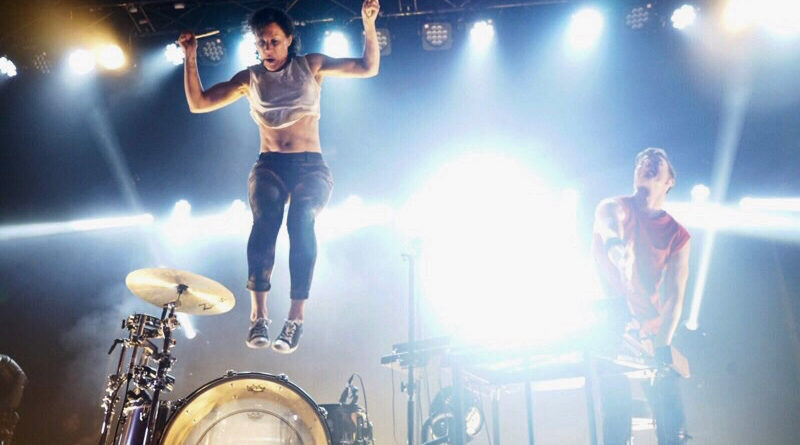 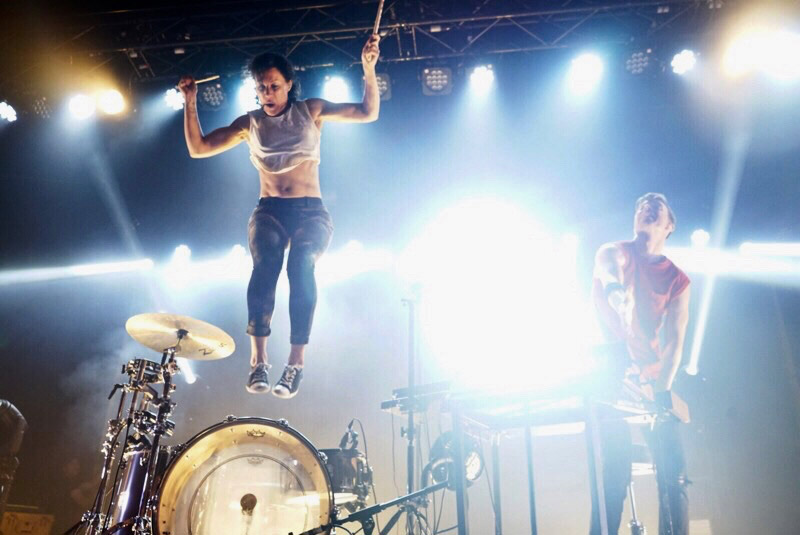 All bands play live shows with the best intention of entertaining an audience. Some bands do it with loud music and stacks of amps; some use wise, lyrical dichotomies; and some shows are boosted by an array of expensive props. As I thought back on over many live shows, I’ve realized it’s the small gestures that make a good event become a memorable experience. That being said, I think my personal fascination with this band can be best captured by mentioning all those “little things” – what might be brief gestures, silly ideas, nuances dropped during transition moments, and other simple crowd-involving steps that make this band such a joy to experience live. When it comes to attention to details, Matt & Kim run the table in spades with their live show.

On Monday, September 10th at Atlanta’s Buckhead Theatre, Matt & Kim’s stage setup was very minimal, just Matt Johnson’s keyboard, Kim Schifino’s drums and some mics on a rectangle riser, with a backdrop screen for visuals. There were also a few pulsing color lamps, a few spotlight lamps behind the center riser, strobes mounted at the base of those light poles, fog machines, and two blinders. But the dazzling light show would be a minimal distraction from the live action onstage. As the lights went out, we saw the riser had some bright glow-in-the-dark tape, which created a nice frame for the performance. There were a few pauses in the opening music, and the space was filled with loud crowd cheers. This audience was ready to dance and sing. They were loud, happy, slightly raucous, but they’re not the least bit rowdy. 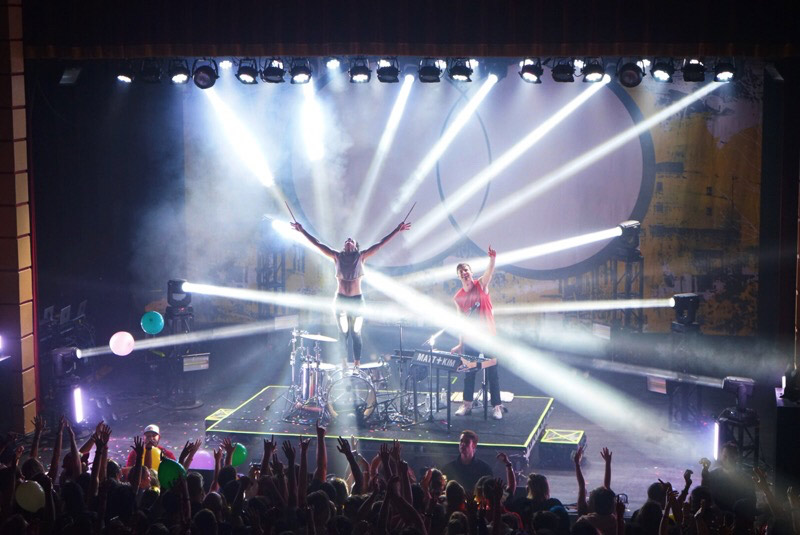 Johnson ran onstage in a red shirt, and Schifino in a white sleeveless shirt. Schifino jumped on her bass drum repeatedly.  Johnson was jumping on the edge of the stage, one hand on keyboards and one hand on the mic, suspended by one leg, mouth to the mic, cheering on the audience to sing along. Meanwhile, Schifino was swapping between drum rolls and waving her arms and sticks with the beat. Schifino asked, “Matt, are you ready to do some shit?” Then, Schifino asked someone to crowd surf her a beer. It was a nice idea, but sadly, that beer never made it to Kim (it was spilled while a crowd surfer tried to deliver it).

The couple did everything possible to keep the crowd excited. There were silly jokes, like when Johnson mentioned a song was, “Fast and hard, like Kim likes it.” Later, Johnson asked, “Want to get weird with us? Push your way to front and center.”  Song three opened with Johnson on the side of the stage, jumping on the riser, yelling “ Everybody jump,” and the backdrop now showed views of the audience on the screen. 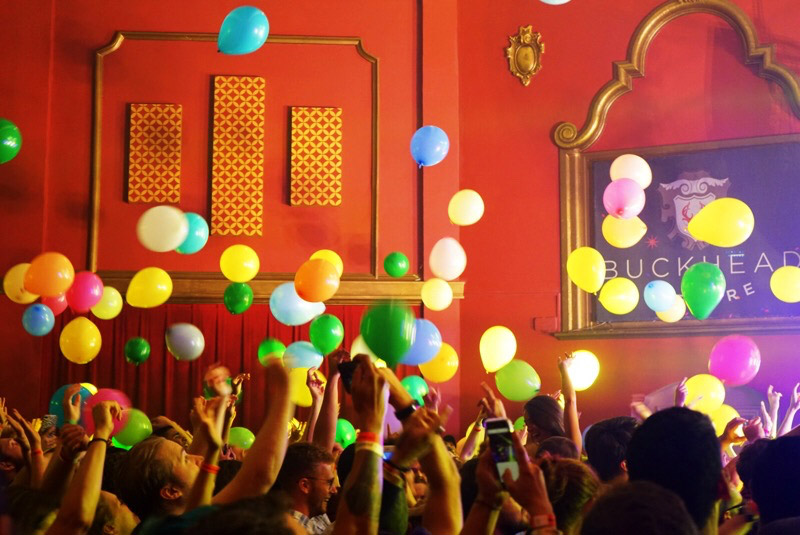 Later, Matt & Kim came to the front of the stage and tossed out rubber balloons to the audience. Johnson asked people to blow them all up, and the audience bounced balloons over the next few songs. Johnson said, “Ten bonus points for each balloon in the balcony,” and one did made its way to the balcony! That was a smart use of the DIY energy – having the crowd blow up balloons made the show feel more like a house party, which was far more exciting than a pre-arranged balloon drop from the ceiling.

Johnson asked if it was anyone’s birthday, and then launched hand-held confetti cannons and the audience was thrilled. Once again, the small self-made DIY props had equal crowd effect as the expensive professional devices. 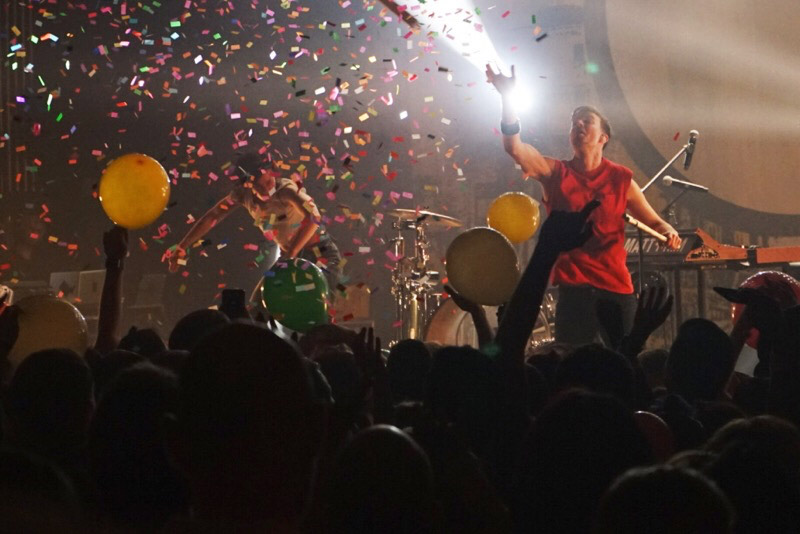 The show had samples of dance, hip-hop, and techno, so the rhythm shifts and extra samples made the familiar tracks unpredictable and fun to experience. Johnson split the audience in two, “Wide as Kim’s vagina,” and during the song there was a cue for the two sides to run into each other. The mosh was quick, but the dancing crowd was kinetic. Background samples of Dorothy from The Wizard of Oz and SNL’s “More cowbell” skit were a strangely effective mix with the music.

Johnson said the crowd rates at 9.1 but he asked the crowd to take it home to 11 on the next song, which was the appropriately raucous chant “Now”.  Johnson stood on his keyboard with one leg in the air at 90 degrees, still playing chords, balanced precisely and still aiming into the mic clearly.  The bridge crescendo was accentuated by Schifino speeding up the tempo and the crowd was already insane but then it went a step further. 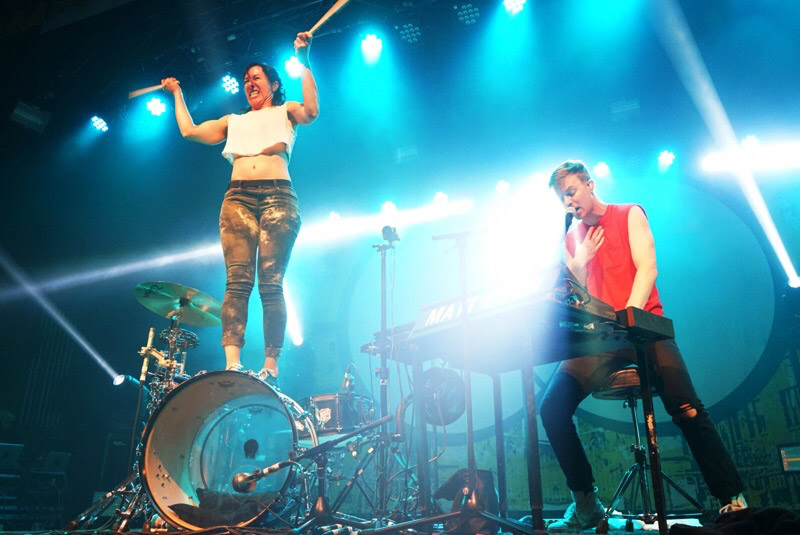 Then he started Van Halen’s “Jump” keyboard riff, and then Johnson was standing on the bass drum with an extra pair or drumsticks, hitting the snare. Next, Schifino discarded her sweaty shirt and was sporting a black bra.

Schifino jumped to the front of the riser and showed some impressive dance skills and Johnson joined her. Schifino wanted to buy someone in the front a drink that she thought was not having a good time, so she handed them cash. They played a few songs that they’d written in Atlanta.

Next, out came the anatomically correct, inflatable crowd surfing sex dolls with Matt & Kim’s faces that were enthusiastically bounced around the crowd. Schifino talked about the improper body part sizes on the blow up dolls, then Johnson suddenly started a sample of “Bohemian Rhapsody” music and sang, “Smoke Weed Every Day”.  This unexpected, unpredictable behavior was very refreshing. 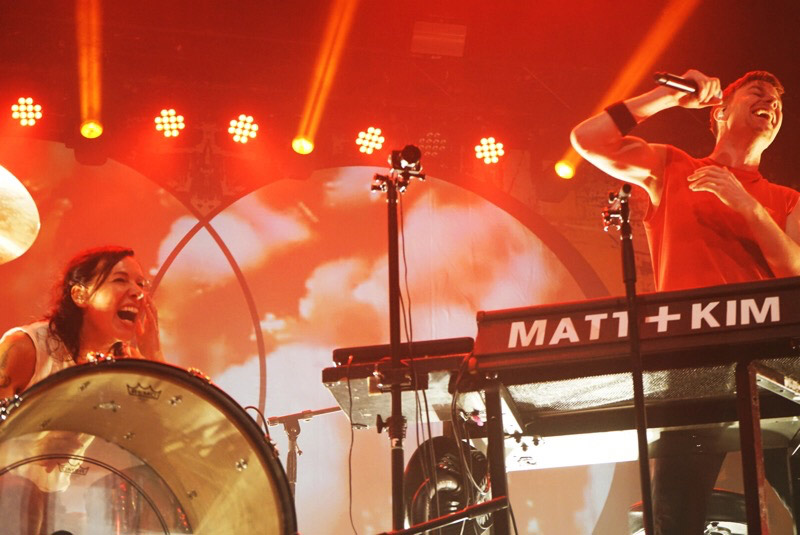 At one point, the backdrop showed the video of Schifino dancing by the Brooklyn Bridge. That was likely the first video I ever saw of this band, and positive memories only reinforced the live show.

I wonder, was it Johnson’s excellent crowd skills, or was it Schifino’s tireless drumming and ‘cool bad girl’ comments that kept the crowd so interested? The varied samples Johnson played, the funny banter between the two between songs, the great timing of words, motions, and gestures were all in perfect rhythm with the music.

At was the end of the set, the audience wasn’t going anywhere – there was a constant loud cheer then the screen went to firework videos on the screens and they both came out singing. Johnson asked Schifino, “Are you ready?” and she yelled, “Fuck yeah!” and they played another song. The show ended with a last shot of confetti, another t-shirt throw, and Matt & Kim kissing.

The raw energy of the band, the unpredictable format of the material, and the physical/gymnastic antics of the band stood out as the most memorable parts of the live show. The underwhelming stage set-up was important, so the audience could focus on the band. This performance was about the live experience, and they hit the mark with so many details, it was a wonderful live show. 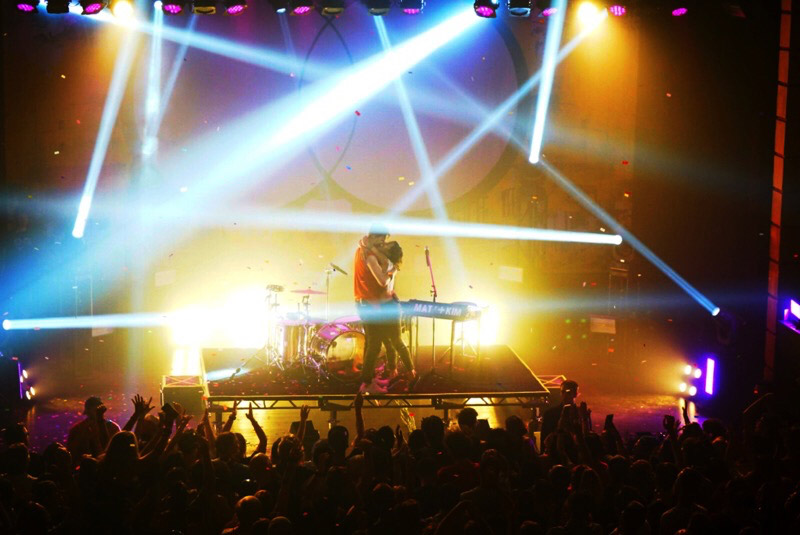